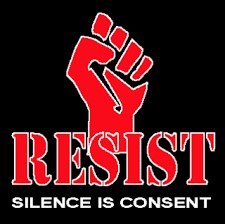 Phase One of mass protest against ‘Rump’

A Kremlin-sponsored presidential regime commences in Washington, D.C., on January 20. It will place my city, my country, and the world in crisis.

Indicators of imminent danger are sorely evident, thanks to the nihilistic decision of sixty-two million Americans to vote for a fascist strongman, or at least one of faux manly strength. Consequently, Wall Street oligarchs and money-changers will command the highest echelons of federal authority, intent on imposing social Darwinism in the cause of greed; Vladimir Putin, the autocratic Russian president and war criminal, has forged a Washington-Moscow axis; the drumbeat for more and wider wars grows daily, with concomitant war profiteering; and…

…common decency is under challenge—as seen in recent news of a plausible Russian kompromat containing allegations that the incoming American president is reliant on Moscow cash to keep his wobbly corporate empire afloat, and has a penchant for sexual perversion of the (ahem!) urinary genre.

The available antidote to looming peril is contained in three little words of introduction to a political manifesto that was revolutionary in the eighteenth century, and is revolutionary in much of today’s world: “We the People—”

Luckily for the world, a critical mass of Americans know those words to be the legal and moral means of overcoming a national embarrassment named Donald J. Trump.

Luckily for the United States, a revered lion of the 1960s civil rights struggle and today the most respected member of Congress—John Lewis of Georgia—has spoken with quiet integrity with an indictment of Mr. Trump: “I don’t see this president-elect as a legitimate president,” he said in a January 13 interview aired on MSNBC-Television. “I think the Russians participated in helping this man get elected. And they helped destroy the candidacy of Hillary Clinton. I will not be attending the inauguration. You cannot be at home with something that you feel is wrong.”

In 1788, after months of squabble and debate, a group of far-sighted aristocrats formalized radical notions of a brave new society in ratifying the Constitution of the United States. When the grandees emerged from their meeting room, finally in concurrence, they faced an anxiously inquiring polity. A certain Mrs. Powell approached a certain Mr. Franklin. She asked the noble delegate from Pennsylvania, “Well, what have we got—a republic or a monarchy?” To which Benjamin Franklin replied, “A republic, if you can keep it.”

One hundred and seventy-six later, in 1963, the soon to be assassinated President John F. Kennedy paraphrased a Chinese proverb in advising us further, “In a crisis, be aware of danger, but recognize opportunity.”

We reflect carefully on the words of Messrs. Franklin and Kennedy today, one of a precious few remaining in the life of American democracy, as we know it.

We reflect, too, on what troublemakers of my own generation used to say when our leaders flirted with sovereign tendencies, a wicked instinct roiling not far below the surface of government by the people, of the people, and for the people. “Democracy is in the streets!” we chanted. We were young men and women then. We bled and died in the great civil rights crusade of the 1960s. We bled and died, as either civilian protestors or military conscripts, during the obscene Vietnam War of that period.

We’ve grown older, slower, and grayer. But we are clear-eyed in seeing again a necessitous battle, in which we’re joined by a fresh army of strong young men and women hewing to the honorable example of American revolutionists at the beginnings of the republic, our ancestral resistors to the megalomaniac tyrant King George III of Great Britain. Two and a half centuries later, we Americans are confronted anew with a demagogue—this time a billionaire bigot who seemed at first a buffoon, but whose malignancy is now unambiguous.

In the tradition of our revolutionist forebears, we shall take our grievances to the streets once more, young and old together—this time on January 21, the day after Donald Trump swears upon the Holy Bible to uphold our constitutional freedoms and liberties, which he will not.

Not this orange-faced bully, this sham tycoon, this peddler of cheesy merchandise, this pathological liar who reveals himself in daily Twitter rants as a vengeful, petty, unhinged narcissist. Not this smug bullyboy; this petulant narcissist; this reincarnation of King George, whose oppression in Ben Franklin’s time inspired us to overthrow the financial and military might of the British Empire—to declare the independence of America as a country predicated on the rule of its people. Compared to George, marginalizing the offenses of the man-child Donald is by far an easier struggle. We have all seen schoolyard roughnecks fall—hard.

Recently, a woman of eloquence and grace stole wind from the sails of the biggest, crudest, and loudest of all schoolyard roughnecks—without once sullying her tongue in utterance of his name. She gave the nation a needed dose of dignity on Saturday evening, January 8, during the Hollywood Foreign Press Golden Globe Awards program. A worldwide television audience saw Meryl Streep call out the absent, unnamed lout—a man who, among other shameful things, stooped low to mock a journalist who suffers the crippling disease of arthrogryposis.

Quietly, yet forcefully, Ms. Streep said what so needed saying:

[T]here was one performance this year that stunned me. It sank its hook in my heart not because it was good. …[T]here was nothing good about it, but it was effective, and it did its job. It made its intended audience laugh, and show their teeth. It was that moment when the person asking to sit in the most respected seat in our country imitated a disabled reporter, someone he outranked in privilege, power, and the capacity to fight back. It broke my heart. I still can’t get it out of my head because it wasn’t in a movie; it was real life.

…[T]his instinct to humiliate when it’s modeled by someone in the public platform…by someone powerful…it filters down into everybody’s life because [it gives] permission for other people to do the same thing.

Disrespect invites disrespect. Violence invites violence. When the powerful use their position to bully others, we all lose.

Volume will rise in the next episode of the New Year’s Revolution. It will be led and organized by America’s women, in the spirit of a slogan we’ll be hearing from now until Mr. Trump leaves the limelight, through impeachment or resignation: “Pussy Grabs Back!”

On Saturday morning, January 21, the big, loud misogynistic bully— inexperienced at and unfit for any level of public office—will awake in the White House. His bed linens will be sweaty and tangled, his balding head a morning mangle of what my seven-year-old grandson calls “that weird yellow hair.” Eventually, he will arrange the mangle into a ruthless, ridiculous, heavily lacquered comb-over.

Groggy ‘til then, Mr. Trump will blink. He will belch. He will fart. He will scratch his bloated belly. He will reach for his ubiquitous smart-phone.

Perhaps he will launch a further tantrum of Twitter denunciations as addition to the series he began on Sunday morning, January 9—at 3:27 a.m.: “Meryl Streep, one of the most overrated actresses in Hollywood, doesn’t know me but attacked last night at the Golden Globes…”

Mr. Trump is yooge-ly proud of this and other “tweets” of his callow oeuvre. He believes his cyber-tantrums compare to literature, an art form with which he is manifestly unfamiliar. (Schlock television is his style, the lower the brow the better. Not long ago, Mr. Trump was himself a smash-hit performer in the oxymoronic realm of reality-TV.) Consider this passage from a January 3 article in the Washington Post: “He boasts to friends, aides, and journalists alike about the quality of his writing…and claims that people call him ‘the Ernest Hemingway of Twitter.’”

Last October, as he traveled aboard a campaign bus whilst being interviewed by a schlock television entertainer, an audio recorder captured candidate Trump’s proud admission to assaultive sexual habits. “When you’re a star, you can do anything,” he said. “Grab ‘em by the pussy. You can do anything.” (Henceforth in this space, Donald J. Trump shall be known as “Rump,” per that portion of the human anatomy that best describes his persona.) 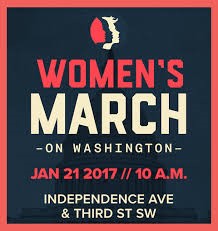 Not far from where Rump awakes in the White House, local police anticipate a quarter-million women assembling for “The Women’s March on Washington.” This, the first salvo in “One Hundred Days of Protest” pledged by grass-roots, ad-hoc organizations such as Action Groups Network and Indivisible. The Washington march expresses rage over Rump’s labeling women who fail to be charmed by him as, variously, “fat pigs” or “dogs” or “slobs” or “disgusting animals.”

Simultaneous sister marches, if you will, are set for a hundred other U.S. cities that day—continent-wide, from Boston in the northeast to Los Angeles in the southwest. Participation in the New York City march is expected to surpass the Washington event. From coast to coasts, the streets will be filled with the sounds and sights of good, old-fashioned American democracy.

Hundreds of thousands of women will shake their thunder at the absurd and dangerous new man in the White House. The men who love and respect them will number hundreds of thousands more. We shall be millions of resistors. And we shall prevail because the price of faltering is too high, because victory over the likes of Rump is bred in our rebellious bones.

We know that we face a defining moment of national history. We know it is our duty, right now, to preserve American democracy—à la “Taking Our Shot,” the signature song of Lin-Manuel Miranda’s brilliant Broadway hip-hop opera recounting the audacity of mass resistance.

Mr. Miranda provides us with the glorious music of an uneducated teenage immigrant to New York City named Alexander Hamilton, destined to become the first U.S. secretary of the treasury and author of much of the world’s most revolutionary literature. Young Hamilton’s song speaks beyond his era to patriotism on the march come January 21. Millions of young people who have yet to see the number performed on stage nevertheless know the lyrics by heart:

Hey, yo—I’m just like my country; I’m young, and I’m not throwing away my shot!

I prob’ly shouldn’t brag, but dag!—I amaze and astonish/The problem is, I got a lot of brains but no polish. 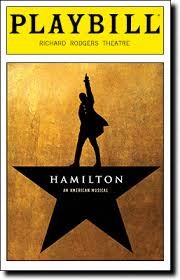 I gotta holler just to be heard/With every word, I drop knowledge.

I’m a diamond in the rough, a shiny piece of coal/

Tryin’ to reach my goal. My power of speech: unimpeachable.

Only nineteen, but my mind is older.

a gun to brandish/I walk these streets famished.

The plan is to fan this spark into a flame/

But damn, it’s getting dark, so let me spell out the name:

We are meant to be a colony that runs independently/

Essentially, they tax us relentlessly/

Then King George turns around, runs a spendin’ spree.

So there will be a revolution in this century!