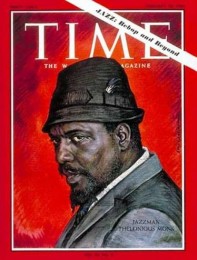 Bill Ott, more than 30 years with Booklist, continues to edit the crime fiction section of the magazine and still delights in discovering new hard-boiled writers – or writing about The Greats. Here he gives us permission to republish his toughts about Thelonious Monk & British author John Harvey, who happens to be our columnist.

Jazzman Thelonious Sphere Monk (1917–82) was notoriously late for gigs, wandering into a club an hour or more after he was due, lingering at the bar, or drifting about the room before, finally, homing in on the piano bench—perambulations that bore a striking resemblance to the trajectory of his jagged piano solos. Given Monk’s own perpetual tardiness, he probably wouldn’t mind my being about a month overdue in writing this tribute to him—a legendary pianist, a vastly influential composer, and one of the creators, in the 1940s (along with Charlie Parker and Dizzy Gillespie), of the revolutionary new music called bebop.

Monk’s 100th birthday was October 10, 2017, and he was celebrated with numerous concerts as well as articles in the jazz press but also in the New York Times, the New Yorker, on NPR, and in countless other places, in print and online. Rather than add one more small voice to the hallelujah chorus that has honored Monk for the last month, 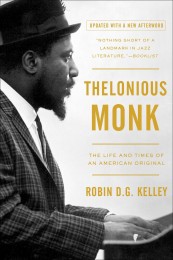 I’m going to focus not so much on his life and work—both of which have been definitively chronicled in Robin D. G. Kelly’s masterful biography Thelonious Monk—but, instead, on Monk in literature. Monk’s dissonant, percussive, heavily syncopated style, full of chords that don’t seem right at first but that define a new kind of rightness, was always a metaphor waiting to happen, and generations of poets and fiction writers have risen to the challenge, finding a Monkian sensibility in the discordance of modern life.

Poets, especially those favoring their own kinds of uneven lines and rhythms, have been especially drawn to Monk. Spend an hour on the internet searching for poems about Monk or mentioning Monk and you’ll find work by William Matthews, Amiri Baraka, Allen Ginsberg, Stephen Dobyns, and many others. Dobyns’ “Thelonious Monk” has long been one of my favorites, not least because it opens with a shout-out to Chicago’s long-gone, much-lamented Rose Records (“A record store on Wabash was where / I bought my first album”). Dobyns was a college student that day (“between my present and future / was a wall so big that not even sunlight / crossed over”), but as he “would sit on the carpet / and listen to Monk twist the scales into kinks / and curlicues,” he began to hear something that spoke directly to him: “What Monk banged out was the conviction / of innumerable directions.” 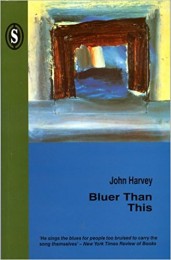 The writer who has most embraced Monk in his work is probably the great John Harvey, poet and crime-fiction master whose landmark Charlie Resnick series stars a browbeaten, melancholic, jazz-loving detective who fights a losing battle against societal chaos. After yet another day of facing the horrible truth that “there’s nothing people won’t do to one another if the circumstances are right,” Charlie sometimes listens to Miles, Duke, Billie, and numerous other jazz greats, but most often he turns to Monk, who is both his inspiration and his solace. Just as Monk worked at a phrase from multiple directions, building around those different-sounding chords, so Charlie prods and pokes at the detritus of wasted lives, finding not just despair but also the still-smoldering sparks of human feeling.

As Monk-drenched as the Resnick novels are, Harvey’s most direct evocations of the pianist occur elsewhere, in his prose poem “Blue Monk” and in the stand-alone crime novel In a True Light. The poem, one of many jazz-themed lyrics in Harvey’s wonderful collection Bluer Than This, springs from a Monk club date somewhere in Europe (“Rotterdam or Oslo, Gothenburg—where doesn’t matter”) near the end of his life. It might have been one of those evenings when an aging jazz legend runs the changes mechanically, but something happens: “His fingers stab at single notes, crush chords; roll with the tide then tighten down. His hands seek and find warm spaces lost between the keys, laughter strung across the dark like lights of fishermen spaced out along the beach, phosphorescence on the sea, like Whistler’s Nocturne in Blue and Gold, the glow of radio stations long into the night.” 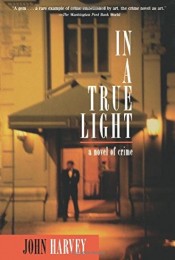 In a True Light is about an aging British painter whose life has taken a series of wrong turns, including a stint in prison for forging paintings. In the 1950s, however, he was a young artist coming of age in Greenwich Village, and, naturally, he was in the audience at the Five Spot in 1957—along with every other hipster in New York—to hear Monk and Coltrane. Harvey’s description of Monk at the piano is a prose poem of its own:

“Fingers rolling a little, feeling for a rhythm in the bottom hand; rocking back upon the piano stool, then thrusting forward, elbows angled out, playing with his whole body. And the drummer, seated at Monk’s back, following each movement, listening to each new shift and shuffle, quick and careful as a hawk. Monk’s foot, his right foot, skewing wide and stomping down, punctuating the broken line as, stationed in the piano’s curve, the bassist, eyes closed, feels for an underlying pulse. And alongside him, head down, horn hooked over his shoulder, Coltrane, John Coltrane, focused, biding his time.”

I wish I’d been there. Should there be anyone reading this column who wonders why a long-dead piano player would get a precious page in a book-review magazine, I can only quote Monk himself, who was known for his aphorisms: “You got to dig it to dig it, you dig?”

Bill Otts column was originally published in Booklist in the November 15, 2017, issue.

Bill Ott on Twitter at @Booklist_Bill
John Harvey’s website and his blog Some Days You Do…
John Harvey at CrimeMag.