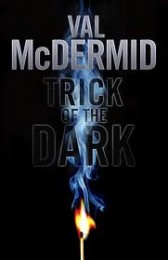 A trick of the dark/Alle Rache will Ewigkeit

Judging by the reviews, it would appear as if Val McDermid’s fans are split in terms of their reactions to her book Trick of the Dark. On the Goodreads website  alone there are thirty pages of comments about the book.  The Amazon.co.uk and Amazon.com websites show a split of almost equal measure between those who enjoyed the book and those who didn’t.  Comments ranged from a gripping thriller to the plot being too contrived.

Now what seems to have a lot of her fans quite excited about is that this book is predominantly about lesbians and their relationships and that Val McDermid, who once said that it would be commercial suicide to write about lesbians, has now written a book about lesbians. The discussion about lesbians does tend to detract from a discussion about the quality of the story itself. However, as McDermid said, the story would not work if it were not based on lesbian relationships, and the triangulation of those particular relationships. While the author certainly does have a point, the amount of detail about Charlie’s relationship quandary does tend to make one wish that a less rather than more approach could have been taken.

Trick of the Dark is a stand-alone book, that is to say, not part of a series or not yet part of a series, although it is not unlikely that the main character, Charlie Flint could become regular in the future. The way her character and background have been developed certainly leads one to think that this is not the last we will hear about Charlie Flint, why even her name sounds good.

Charlie Flint is sent an intriguing package of cuttings about a violent murder. Charlie’s career in shreds due to her being castigated for giving an uncompromising assessment of a man which results in him being found not guilty but who later murders four women. She is suffering from a seven-year itch in her relationship. So she is well placed to try and resolve the mystery of the cuttings sent to her anonymously of the brutal murder which took place at her former Oxford College. Her sleuthing takes her back to her old college and former colleagues as she attempts to sift through the clues and the lies to solve this mystery.

In Trick of the Dark, men play a minor, if not, a token role and seem for the most part to be weak. Although one is reformed and acts as an aide to Charlie‘s sleuthing.  And sleuthing is precisely what Charlie does.  Trick of the Darktends to be somewhat reminiscent of the sort of girl detective stories from the early to middle twentieth century. A lot of these stories were likely to have been set in boarding schools or colleges and the girls tended to have crushes on each other. Whilst there may not always have been murders, the main character was always resourceful, was always trying to solve a mystery and always landed up in danger.

Clearly McDermid enjoyed writing this novel where she was able to combine her obvious regard for her alma mater, together with her, as she puts it, devious and twisted mind.  The book took twelve years to come into being and McDermid says she grappled with how to show the characters and it was only through the development of the misery memoir that she found a vehicle to do so. Interestingly she uses the technique of a misery memoir book within a book to do so, and is it quite effective.  Some of the more gripping parts of the book are the excerpts from the misery memoir.

Notwithstanding the length of time it took for the book to be developed, after the languid pace, relationship angst and character development, the ending appears somewhat rushed, contrived and requires a suspension of belief. In short a brilliant prologue, interesting beginning, slightly flabby middle section and a quick ending.

The latest in the Tony Hill and Carol Jordan series, The Retribution, is due for release in German towards the end of the 2012. It is McDermid’s 25th novel in 25 years.  It is taught and gripping with a slight retro feel.  Hello again Jacko Vance.