Kolumne John Harvey: In a Mellotone (10)

I first became really aware of Hodgkin’s work towards the end of 1995, the beginning of 1996, when I was able make several visits to a major retrospective of his paintings, first at the Metropolitan Museum of Art in New York and then at the Hayward Gallery in London. It was difficult – nigh on impossible – not to be dazzled, delighted, impressed – the richness of colour, the seductive brilliance, all those glorious swirls of paint – echoes of other favourite painters, Bonnard, Vuillard.

It was only when visiting a late exhibition, at Oxford in 2010, that some doubts arrived, not about the earlier work, which I still loved, but the more recent. Had there, with age, been some kind of falling off, and if so, was that not perhaps inevitable? It’s a question I asked myself about my own work at the time, and which I ask myself now, seven years later, seven years older, and some 20,000 words into a new novel. Is it, can it be, as good as the best of what’s gone before?

Early readers [we’re talking strictly family here] have noted what they see as a possible change of style towards something tighter, more propulsive, faster moving – anxious to get it finished, perhaps, while I still can.

Here’s the piece I wrote back in 2010, after visiting the exhibition in Oxford … 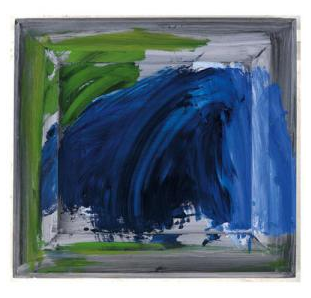 Having walked round the Hodgkin exhibition at the Gagosian with my youngest daughter a couple of years back, I asked her what she thought. “Okay, but not as good as his early stuff.” She was all of 10. Challenged, she dragged me out to the foyer and a copy of the book we’ve got at home showing work from the early to mid-1990s. She had a point.

I remembered this standing in one of the upper rooms of Modern Art Oxford, which is hosting Time & Place, an exhibition of new Hodgkin paintings, dating from 2001 to 2010. Uncertain of my initial responses, I wondered aloud to my companion about the perils of continuing to work into the latter year’s of ones life and producing work that was less good than what had gone before, thus risking the sullying of one’s reputation.

It seems to me, she said, somewhat wisely, that you’re talking about yourself, not Hodgkin.

And she’s right. There have been times in the past – even before, in my mind at least, the age thing became an issue – when, having written something I thought pretty good – not great, but about as good as I could manage – I was cautious of moving on to something else for fear it wouldn’t be as good. I felt it after writing the first of the Resnick books, Lonely Hearts, aided on that occasion by my then editor telling me, in so many words, it had turned out rather better than he’d dared hope.

I’ve also felt, an analogous feeling, that I’d written (and worse, had published) something so poor that the next thing had to be bloody good in order to take the taste, as it were, out of my – and my readers’ – mouth(s).

But back to Mr H0dgkin. In the catalogue essay, which I read on the train home, Sam Smiles writes interestingly about the notion of ‘late work’. Vasari, he notes, having visited the elderly Titian in his studio, deprecated the fact that Titian had carried on working, harming his reputation as his creative powers “inevitably waned”. This, Smiles asserts, is not necessarily the case (check out Beethoven’s late quartets, Picasso, de Kooning et cetera, et cetera). What you can find – and what Smiles finds in Hodgkin – instead of ‘late work’ is a ‘late style’. And yes, these paintings are, on the whole, less busy, less baroque, less full, less likely to confound and astonish the eye; what you have instead is something simpler, more direct, more content with a simplicity of image, of stroke, of colour, of line. Marks that have the appearance of being quickly, urgently made. The single, supple swirl of “Leaf”; the fierce bands of light and cloud in “Yellow Sky”; the force and gravity of “Spring Rain”, a brisk and sudden downpour of oil of wood.

And here is my poem based on one of Hodgkin’s paintings, After Corot … 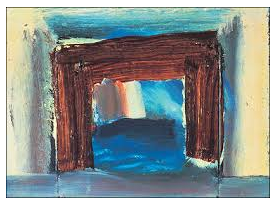 sleeping, your skin ivory
reach & fall of your breathing

in the painting everything is
at a distance: cliff, harbour,
sea, sky

only wait
and the light breaks white
on the horizon, mastheads etch
contours green beyond the wall’s bulk
and as a small boat painted red hoves into view
the land slips another foot into the sea

you throw up your arm

the rocking of the train
as it rounds the slow curve