„The jazz circles in England are peppered by evenings where sax, drums and horns punctuate poetry read by author John Harvey, best known for his crime novels“, writes Sascha Feinstein, Ph.D., professor of English and creative writing at Lycoming College (Williamsport, Pennsylvania) in the introduction of his interview he conducted with me for “Brilliant Corners”, a biannual journal with a unique blend of literature about jazz. To accompany the interview, Sascha Feinstein chose extracts from four of my books as examples of the way I write about jazz … and the ways in which my characters, most often Charlie Resnick, listen to it.

This is Charlie and the Vic Dickenson Septet from Easy Meat …

“Old Fashioned Love.” The opening growl from Vic Dickenson’s trombone sounds like the fanfare from a fairground barker, but once piano and bass have settled into their gentle stride, he nudges the melody along respectfully enough, just the odd hint of jauntiness to keep sentimentality at bay; then, rolling out from the lower register with that tart huskiness that marks his playing, Edmund Hall takes the tune through a second chorus before the clipped notes of Ruby Braff’s trumpet start to lengthen and unwind. Which is as far as Resnick gets, because now the phone is ringing and he reaches awkwardly toward it, fiddling the remote onto pause and then dropping it into his lap, where an aggrieved cat wakes with a start and jumps to the floor, one paw tipping the saucer that holds a half-finished cup of coffee growing cold …

Resnick retrieved his cup and rose to his feet, releasing the pause into the beginning of Sir Charles Thompson’s piano solo. Bud’s head nudged repeatedly against the backs of his legs as he stood there listening, the cat urging him to sit down so that he could jump onto his lap. Only after the second trumpet solo and Dickenson’s closing trombone coda, lazy but exact, did Resnick open the tray and drop the CD back into its case, switch off the stereo, carry cup and saucer into the kitchen to rinse, open the fridge on a well-honed impulse and lift out a slice of ham, warp it around the last half-inch of Emmental cheese, something to nibble while he put on his coat and hesitated in the doorway, patting his pockets for his wallet, money, keys.

The Vic Dickenson Septet recordings from the early 1950s, along with the first of the Buck Clayton Jam Sessions, the one with “The Hucklebuck”, were amongst the recordings my friends and I listened to most growing up, prime examples of what was then called Mainstream Jazz.

As for the novel from which this extract is taken, I always used to say, when asked, that Easy Meat [Proie Facile in France] was my favourite of all the Resnick novels and I think that just about stands – my favourite from the first ten, at least. And why? I used to say it came closest to fulfilling my intentions when writing (though there’s a major assumption there, that I knew what those intentions were). But I do think that overall I like it because it’s the most downbeat and unforgiving and also I allow myself to say I love the ending, those closing pages in which Sheena and Dee-Dee and their pals run amok outside the bowling alley. These are the final paragraphs …

Sheena staring at the blood beginning to swell up around the man’s white belly, fascinated, and Janie, out of her head beside him, laughing.

Running then, leaving Janie to face the music, the first sounds of a police car approaching at speed along Canal Street and Sheena, as she allowed herself to be dragged away, turning now and stumbling, looking back and thinking, awesome, truly awesome. I mean, absolutely fucking brilliant! Brilliant, right? 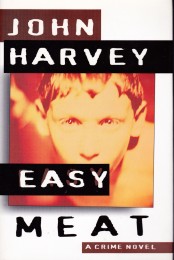 And how about this cover for the Henry Holt edition? One of my absolute favourites, and designed by Raquel Jaramillo – credit where credit’s due. Here is another quote:

Sloane, skinny in Levis and a plaid shirt, had stood on line at the Five Spot for the best part of an hour and missed most of the first set. Inside, the only seat he’d been able to find squashed him close to several others on a table right up against the stage. Monk soloing against the rhythm, fingers held stiff above the keyboard then jabbing down, the bright percussive sound chiming through the buzz of conversation, clink of glasses, the occasional shout of laughter from the back of the crowded room.

Monk wearing a pale jacket loose across the shoulders, pale green, silver and grey striped tie knotted snug against the collar of his white shirt, dark hair neatly, recently trimmed, no hat tonight, no hat, goatee beard and moustache, dark glasses shielding his eyes. Fingers rolling a little, feeling for a rhythm in the bottom hand, rocking back upon the piano stool and then thrusting forward, elbows angled out, playing with his whole body, and the drummer, seated at Monk’s back, following each movement, listening to each new shift and shuffle, quick and careful as a hawk. Monk’s foot, his right foot, skewed wide and stomping down, punctuating the broken line as, stationed at the piano’s curve, the bassist, eyes closed, feels for the underlying pulse. And Coltrane, John Coltrane, horn hooked over his shoulder, head down, fingers fluttering from time to time over imaginary keys, stands mute, focused, waiting his time.

It comes from a stand alone crime novel, In a True Light, which was originally published by William Heinemann in 2001. Beginning with the release of its central character from prison …

They let Sloane out of prison three days short of his sixtieth birthday. Three years for deception, reduced on appeal to two; six months in Brixton, the remainder in Ford open prison.Naturally lean and wiry, Sloane walked out through the gates a fitter man than when he’d walked in. 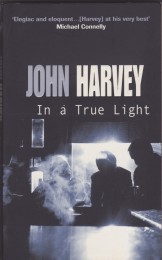 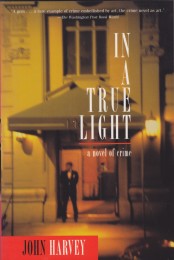 A painter, the particular deception of which Sloane was found guilty was that of forgery; of late, he had found other people’s work, in his own exact interpretation, more saleable than his own. The novel works on two time frames, one in the present, following Sloane to New York in search of the daughter he never knew he had, the other tracing him back to the late 50s when he was a young, aspiring abstract expressionist painter in Greenwich Village – which is where and when he gets to listen to Monk.

In my opinion, it’s not a wholly successful novel – I’m not sure now well the different parts fuse together, the contemporary crime scenes in particular – but it does have some scenes of which I’m very fond and even, dare I say it, some writing of which I’m proud. And, of course, it gave me the opportunity to think and write about the art, jazz and poetry of New York during a period that has long held a strong fascination. Frank O’Hara, Jackson Pollock, Helen Frankenthaler, Thelonious Monk.

From the editors: Along with the interview, where John Harvey discusses the influence of jazz on him as a writer and his most famous character, detective Charlie Resnik, poetry shines as the main focus of the Summer 2017 issue of “Brilliant Corners,” including two pieces by Billy Collins, the former Poet Laureate of the United States, and a lengthy excerpt from a book-length poem by Yusef Komunyakaa, a founding board member for “Brilliant Corners” and recipient of the Pulitzer Prize. Bill Tremblay, whose book “Shooting Script: Door of Fire” earned the ForeWard Magazine Silver Award and the Colorado Book Award for Poetry, shares a memoir about the influence of jazz on his formative years into adulthood. Founded in 1996, “Brilliant Corners” is a biannual journal with a unique blend of literature about jazz, edited by Feinstein. A subscription costs $12 per year ($18 for international orders). Send check or money to Brilliant Corners, Lycoming College, 700 College Place, Williamsport, PA 17701. More information can be found here.