Thomas Adcock: ‘Give me your tired, your poor, your huddled masses …’

‘Give me your tired, your poor, your huddled masses …’

Where to begin on the subject of the most loathsome mobster currently at large in the United States? Every thirty days as I sit down to compose my monthly offering to CrimeMag, I ask this question.

Today, I ask again, Where to begin with Donald J. Trump?

Mr. Trump’s endless racketeering, mendacity, and racism are daily cyclones ripping through my country and the world, corroding more and more in their path. We are left exhausted at the close of each day, hard put to fully absorb the debasement of civilization he has caused, to which we have grown sadly accustomed. The man is a walking, talking abuser of the Ten Commandments who nevertheless boasts, “I think I’m a wonderful moral leader.”

It is too much to deal with such a vile force in the aggregate. At least for the time being, while he is free in his life and dominant in ours. Yes, Mr. Trump will soon be gone, sunk to infamy as others in history’s catalogue of criminals and maniacs are. But these days he remains among us are heavy and injurious and vulgar and seem so much longer than merely twenty-four hours each.

The best I might do as a journalist in this godawful moment is to scratch out my own assessment of Donald J. Trump’s bulging rap sheet, crime by crime by crime. I begin with an offense I shall never forget nor forgive: his spoliation of the Statue of Liberty, symbol of one of my country’s finest instinct—unhesitant mercy for immigrants, exiles, and refugees.

Here in America, hagiographic land of the free and home of the brave, we call the final months of each year and the start of a new one The Holidays. By which we principally reference three celebrations:

Crīstesmæsse—occurs at the time of the December solstice. It celebrates the ancient birth of a Jewish lad whose parents feared the murderous intentions of an anti-Semitic scourge of young boys known as King Herod of Judea. The lad’s parents, Joseph and his pregnant wife Mary, fled their village of Nazareth more than two thousand years ago—on foot and impoverished—for asylum in Egypt. Along the way, baby Jesus was born in a barn.

As I write, the quiet pomp of Christmas Day is less than two weeks off. As an admirer of pageantry, Donald J. Trump will feel moved to behave himself for the occasion and to issue forth—via teleprompter, from the Rose Garden of the White House—a few uplifting words about baby Jesus and the enduring glory of His charitable teachings as an adult.

It is unlikely that anyone attending Mr. Trump’s paean to probity will assume the rôle of skunk at the garden party by reminding him of certain inconvenient facts:

For these reasons, virtually every nation in the world signed the Chemical Weapons Convention of 1993, banning the use of tear gas as a weapon of war. Donald J. Trump used tear gas against screaming refugee children and their parents.

Of Donald Trump’s three wives, two were immigrants—Ivana Marie Zelnícková of the former Czechoslovakia, and Melanija Knavs of Slovenia. In 1930, the president’s mother, Mary Anne MacLeod (1912-2000), was classified by U.S. Customs officials as an “economic migrant” from the Outer Hebrides of Scotland. As the daughter of a poor Scottish crofter, she lived in “indescribable filth” and “human wretchedness,” according to local historians of the period.

The president’s grandfather, Friedrich Drumpf (1869-1918), was an immigrant from Kallstadt, at the time a part of Bavaria. 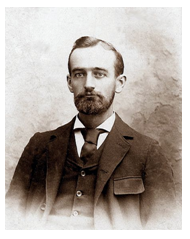 He worked illegally in Manhattan as a barber, moving on to the Yukon Territory of Canada where he amassed a fortune as a brothel keeper. Returning to New York with a pimp’s bounty, Herr Drumpf was promptly deported to Germany, only to have Berlin declare him persona non grata and send him back to New York.

One might reasonably imagine that Herr Drumpf’s grandson would have a soft spot for immigrants. And perhaps somewhere in his inconspicuous heart he does, so long as they’re of a certain skin color.

At the approach of Thanksgiving last month, Donald J. Trump re-energized his campaign of persecution against dark-complexioned immigrants—refugees from poverty and gang violence in the Spanish-speaking nations of Guatemala, Honduras, El Salvador, and Nicaragua. (Never mind that much of the poverty and violence in those places is rooted in U.S. government and corporate support for corrupt regimes.)

Thousands of miles across scorching deserts the refugees walked, arriving at the U.S.-Mexico border in four bedraggled caravans totaling as many as ten thousand. The outsized presence of women traveling with children, some as young as infants, was startling. Startling, too, were the hundreds of children traveling alone—sent by grief-stricken parents into the English-speaking unknown, deemed a safer place than home.

Donald J. Trump maligned these people as “invaders.” Or “bad hombres” intent on rape and murder. Or adult “grabbers” who used children—no matter whose children—to win sympathy with American officials at government processing queues. Or secretly embedded “Middle Eastern types” bent on terrorism. Never did he reveal details of how he came to know of such horrors.

— THIS JUST IN: On December 15, the New Jersey Attorney General’s Office opened an investigation regarding the allegedly illegal employment of five undocumented Latina immigrants at the Trump-owned Bedminster Golf Resort across the Hudson River from Manhattan. According to the women’s statements, provided to state prosecutors by their private lawyer, the resort management obtained counterfeit working and residence papers for them. The women came forward to complain, they said, because their managers routinely engaged in racial slurs, ethnic insults, and physical violence.

Mr. Trump, who maintains a home at the resort, has said nothing of the matter. Victorina Morales of Guatemala, one of the complainants, was assigned there as his housekeeper. Among her experiences working for the president, Ms. Morales recounted how he once grew furious when a shirt she laundered had an orange ring around the inside color. Despite repeated scrubbings, she told the Times, traces of presidential cosmetic applications would not disappear.

On December 11, Mr. Trump claimed that U.S. authorities had “in recent days” captured ten hardcore terrorists who had infiltrated the caravans. He did not name the suspects, or disclose where they are held. The U.S. Department of Homeland Security could not verify the president’s claim. A spokesman for the State Department said there is “no credible evidence indicating that international terrorist groups…sent operatives via Mexico into the United States.”

On December 5, Mr. Trump defended tear gassing refugees by referring back to his dire warning of an imminent public health disaster during the presidential campaign: “Tremendous infection and disease is pouring across the border (sic).” Doctor Paul Spiegel, co-author of a newly released two-year study on the question of worldwide migration and its effects on public health, strenuously disagrees.

“There is no evidence to show that migrants are spreading disease,” said Dr. Spiegel, director of the Center for Humanitarian Heath at Johns Hopkins School of Public Health in Maryland. “That is a false argument used to keep migrants out.”

Richard Horton, editor of The Lancet, a British medical journal that published the study, added, “Migrants commonly contribute more to the economy than they cost, and how we shape their health and well-being today will impact our societies for generations to come.”

Increasingly, political commentators in America remind us of what the first Mrs. Donald J. Trump found particularly disturbing about her husband’s reading preferences. According to an affidavit filed by Mrs. Ivana Trump the New York Civil Court during divorce proceedings in 1992, the mister kept a collection of Adolf Hitler’s speeches on his bedroom nightstand, handy for frequent perusal.

Perhaps the mister came across passages related to matters of health policy envisioned by Der Führer. Such as Hitler’s notion that Jews forced “racial tuberculosis” into “German lungs,” or his description of Jews as “a dangerous bacillus.”

On December 13, a seven-year-old refugee girl from Guatemala, died while in the week-long custody of Mr. Trump’s goons.

Bone weary from their 2,000-mile (3,220 km) walk from Guatemala to the U.S.-Mexico line, young Jakelin Caal Maquin and her father were unable to follow others to the official border station at San Ysidro. Instead, they crossed illegally into America and sought asylum by immediately surrendering themselves in to authorities—a procedure recognized as a human right under U.S. and international law.

For eight days in the Mexican desert, Jakelin had neither food nor water. We do not know what, if any appropriate care the goons provided once she and her father were detained.

We do know his: Burning with fever, she died of extreme dehydration. The U.S. Border Patrol, in a press statement, offered “sincere condolences” to the Maquin family. Separately, the Trump appointee with ultimate responsibility for the goons‘ conduct blamed Jakelin’s father for her death..

The American promise to the world is a poem by the Brooklyn writer Emma Lazarus (1849-1883), titled “The New Colossus” and etched into the base of the Statue of Liberty:

Not like the brazen giant of Greek fame,
With conquering limbs astride from land to land;
Here at our sea-washed, sunset gates shall stand
A mighty woman with a torch, whose flame
Is the imprisoned lightning, and her name
Mother of Exiles. From her beacon-hand
Glows world-wide welcome; her mild eyes command
The air-bridged harbor that twin cities frame.
“Keep, ancient lands, your storied pomp!” cries she
With silent lips. “Give to me your tired, your poor,
Your huddled masses yearning to breathe free,
The wretched refuse of your teeming shore.
Send these, the homeless, tempest-tossed to me,
I lift my lamp beside the golden door!”

These are the words that greeted Mary Anne MacLeod as she and a boatload of fellow “economic migrants” arrived in America after a hellish ocean journey in the cause of finding a better life. From the time of Mary and Joseph onward, hellish journeys are made by the desperate—women like Mary Anne MacLeod among them, and the children gassed by her son. As much of the world celebrates the birth of a refugee child 2,018 years ago, Donald J. Trump defends his brutal treatment of those seeking the very promise made to his mother. The president of the United States of America is incapable of respecting the 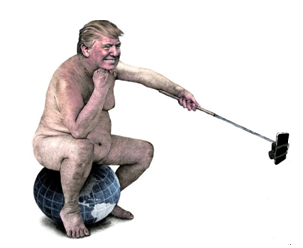 hardships of others, the Christ child and his own mother included. He might as well ring in Christmas with an honest sentiment: “Baby Jesus, go home.” Such is the nature of a malignant narcissist, whose transitory power is rooted in guttural encouragements lavished on him by true-believing yahoos who flock to his public appearances, perchance to snap a selfie with Himself. They stamp and shout to the tune of his nakedly fascist oratory that prostitutes a mighty woman with a torch. Such is Donald J. Trump’s pathetic proof of self-worth, indeed of his ostensible manhood. But does the orator hear the rumbling from below as it rises more loudly, more insistently, closer and closer to the surface of his collapsing dais? Or is he too busy basking in his own image?        Merry Christmas, Mr. Trump. And may the New Year of 2019 bring all that you deserve

—Thomas Adcock is America correspondent for CulturMag
His essays  at CulturMag