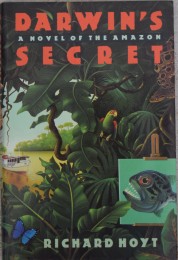 Mysteries of the Amazon

For those who may have wondered what horrors, monsters and thrilling adventures might lie in wait along the upper reaches of the Amazon, an almost plausible answer is supplied by Richard Hoyt in his wild, witty and often caustic novel about what happens to those who sail into strange waters where the catfish have heads as big as Volkswagens. Sailing into these waters aboard the river boat Barco Igaranha is a gratifyingly mixed lot that includes Hanna McDougal, a former emergency room doctor on the lam; Nicholas Bodan, an impecunious but prolific American writer; Father Ferrua, a Catholic priest, far from mendicant and nicely learned; and Mae Janaina, a 6-foot-5 eclectic witch doctor, who seems to employ whatever works, whether it be African juju or South American voodoo.

This is also a tale of quest, although some are seeking gold while others are seeking a clay fish, made by a Portuguese priest in Africa in the 15th century, and said to have miraculous curative powers. To season his already bubbling stew, Hoyt tosses in a lost tribe of Europeans called the XuXu, who are rumored to live a Utopian life deep in the jungle, ruled mostly by common sense. The river boat is owned and captained by a pair of expatriates, Hans Weckert and Lenny Humphries. And it’s immediately apparent that these two are much more than they seem to be. Indeed, it is Weckert and Humphries who are among those privy to Darwin’s secret. The voyagers encounter storms, pirates, bandits and people who shoot arrows at them. They also visit a sprawling cattle ranch — the main supplier of beef for an American hamburger chain — which is systematically enlarged by burning off immense chunks of the Brazilian rain forest. But because the range-fed Brazilian beef is too lean for American tastes, beef fat must be imported. One of the Brazilians (educated at San Diego State University) explains: „When you add flash-frozen Kansas City fat to flash-frozen Brazilian lean, your machine pops out patties with Kansas City flavor at the other end.“

The despoliation of the environment, particularly the Brazilian rain forest, is only one of Hoyt’s targets. Most religions are another. And the American medical profession also comes in for its share of hard raps. While she was still an emergency room doctor, Hanna Doherty’s husband died of AIDS. She feels that „the truth was that if the medical profession had been more honest about AIDS from the beginning and less motivated by profit . . . then tens of thousands of lives, if not more, might have been saved.“ Finding herself saddled with the job of hospitality chairman of a medical convention, Doherty buys a supply of male reproductive organs from a bootlegger of human spare parts; slices and sautees them, and then serves them as hors d’oeuvres to the assembled doctors, who believe they’re eating les petits calmars noirs et blancs d’Atlantide — or fried squid, light and dark. Discovered, and there would’ve been no point to her prank if she were not discovered, Doherty flees to Brazil. She and the broke American writer, Nicholas Bodan, gradually fall in love as they journey up the Amazon and provide the novel with a reasonably erotic love interest. But what awaits the voyagers at the end of their journey is sheer terror. And this Hoyt handles very well indeed.

Darwin’s Secret is a departure from Hoyt’s previous novels in that it is a pure adventure tale rather than one of detection or espionage. He blends accurate scientific facts with nicely confected ones into an intoxicating mixture that almost induces complete suspension of disbelief. A facile and energetic writer, Hoyt is also enamored of alliteration’s artful aid and much given to describing how things sound. Wooden bells go „Toook-Toook!“ Fish that sound like banjos go „Fluck-Pluck.“ And river boat engines go „Mom-mam-mam-mam-mom.“ This last sound may be one of personal interpretation because the engine of the river boat I once took up the Niger went ‚Kchugk-kchugk-kchugk.“ But Darwin’s Secret — and what a stunning secret it is — is the best trip I’ve ever taken up the Amazon.