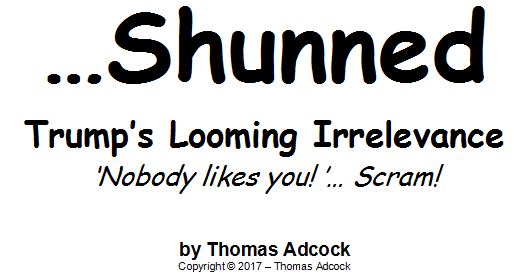 Like chronic boils on a fat man’s neck, Donald J. Trump shall not fade to obscurity. So long as there is a market for freak shows anywhere on Earth, he will remain in the public eye. Yet we need him gone from the White House, at least, and soon. Thus, we Americans are forging an alternative path to relief from this carbuncle of a man: Day by day, we bury Mr. Trump a little further in the ash heap of irrelevance.

Resistance to the political and moral degeneracy for which he stands was born the night of January 19, 2017, the eve of Donald J. Trump’s inauguration as president. On that night, thousands of us New Yorkers gathered near Central Park to shake our fists with righteous indignation and patriotism beyond his capacity to understand. Then, on the morning of the twenty-first, organized resistance took shape with the so-called Women’s March—more accurately, a multi-issue, anti-Trump global protest in which more than ten million women and men took to the streets of the United States and beyond, according to crowd counts by the Washington Post.

And now from the Deep South state of Alabama, of all benighted places, the world has witnessed what may well be the penultimate blow to knocking out a malignant construct known as Trumpism. Perhaps, too, the death knell of Trumpism’s official entity—the Republican Party, lately overtaken by Trumpist goobers in the thrall of an eponymous kleptocrat.

The contest was bigger than Alabama, a deep-dyed Republican state where Mr. Trump thumped Hillary Clinton by a twenty-eight-point plurality in the presidential election of 2016. The Moore-Jones contest was no less than a referendum on Donald Trump, who loudly supported his fellow bigot and alleged sexual predator.

Former New York Times executive editor Howell Raines suggested in a post-election television interview that if a mild-mannered Democrat like Mr. Jones could triumph over the momentary president’s wishes, a Democrat could defeat a Republican anywhere; ipso facto, the Republican Party is in dire straits. “This is the strongest Trump base in the country,” said Mr. Raines, a native of Winston County, Alabama, where ninety percent of the electorate voted last year for presidential candidate Trump, “and we’re seeing it fracture before our eyes.”

Giving hope to a Trump-weary nation and world, Mr. Jones declared in his victory speech, “This election has been about common courtesy and decency. This entire race has been about dignity and respect. This campaign has been about the rule of law. We have shown the country the way we can be unified.”

Meanwhile in the mother country, the United Kingdom appears to be on the brink of declaring the momentary president of the United States persona non grata.

Specifically, Parliament is considering the cancellation—again—of next month’s re-scheduled official state visit in honor of Donald Trump, not yet a full year in office though it seems a painful eternity. His disgusting conduct is too much for Britain to bear, per a multi-partisan chorus of MPs. Moreover, conduct that other nations and foreign potentates cannot stomach, save for fascistic autocracies and the likes of Vladimir Putin.

And lest we forget, members of Mr. Trump’s own administration find the titular head of Republican Party stupid and uncouth, at best. (As does the entire Democratic Party opposition and virtually all subgroups of the American polity, save for Christianist bible slammers and the Ku Klux Klan.) Secretary of State Rex Tillerson, for instance, reportedly described the president as a “fucking moron” while White House national security maven H.R. McMaster is said to have told associates that their boss is a “dope” and an “idiot.”

Of special note: A mid-level staff aide in Congress, who asks to remain nameless, informs me that a discreet hand signal—three index fingers pointing downward, symbolizing the letter M, for Moron—is à la mode among the ranks of Washington pols and civil servants who subscribe to the assessments of Messrs. Tillerson and McMaster. In light of Mr. Trump’s habitual petulance, signalers prefer prudence over the provocation of smirks and guffaws when in the mandated presence of a notoriously tetchy moron with no compunction to damage the careers of his subordinates.

As regards Oval Office meetings on hush-hush topics of American spying and clandestine military incursions, Central Intelligence Agency director Mike Pompeo has given up on briefing Mr. Trump via the written word. Instead, the C.I.A. now employs charts, pictures, and drawings. As Mr. Pompeo explained in an interview, “That’s the way [Trump] can best understand the information we’re trying to communicate.” Not that graphics guarantee the momentary president’s comprehension. After NATO Secretary-General Jens Stoltenberg met Mr. Trump last April, he told a European colleague, “The president of the United States has a twelve-second attention span.”

Donald Trump’s departure from the White House is imminent, which is why I use the word momentary. He may be frog-marched to a paddy wagon, he may be persuaded to go quietly, he may find an exit route by way of next month’s official presidential physical examination at Bethesda Naval Hospital. As a stressed-out, flabby 71-year-old low-rent billionaire who exists on a diet of chocolate milk shakes and McDonald’s hamburgers—this dietary intelligence according to a recent article in the Times—Mr. Trump is bound to receive a poor medical report; with whatever modicum of grace he can muster, with whatever public sympathy he can inspire, the most unpopular president in the history of opinion surveys may then resign on grounds of failing health.

Consider an observable irony: Though famously narcissistic, Mr. Trump has rallied the reasonable world to the cause of poetic justice—his own political impotence.

Back to the mother country, where the rally took root shortly after Mr. Trump’s inauguration. A petition in late January of this year, signed by exactly1,863,708 British citizens, demanded that Parliament rescind Prime Minister Theresa May’s invitation, on behalf of the Queen, to a balls-out state visit in July. It was to be in conjunction with the G20 summit in Hamburg. Petitioners objected to the tenor of Mr. Trump’s 2016 campaign—a carnival of racism, misogyny, jaw-dropping ignorance, homophobia, pathological lies, vulgarism, thuggish rhetoric, anti-Semitism, Islamophobia, and—oh, yes—claims that we of media ilk are “enemies of the people,” a nice echo of Josef Stalin.

Parliament did not oblige those million-plus petitioners. But Mr. Trump, gone scaredy-cat over the prospect of riots in London, nevertheless postponed the splendor of his tête-à-tête with the Queen to some fine day in January of the New Year.

That day is now much in doubt, once more due to the momentary president’s reflexive repugnancy, to wit: Late last month, he re-tweeted racist “news” from the website maintained by Britain First, the U.K.’s decertified fascist party. This time, no petition from the citizenry is needed. Calls for the American lout to keep the hell out of Britain come from Parliamentarians themselves.

The U.K. is hardly alone in its distaste for the Kremlin-sponsored useful idiot now despoiling the White House. A very few from the legion of examples: 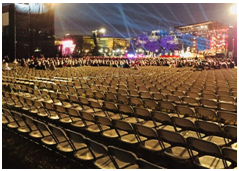 • For many decades, the Christmas tree lighting ceremony at the White House has been a festive, heavily-attended affair. No more, so long as the Trump regime lasts. The Huffington Post news website headline for this year’s event: TENS ATTENDED.

As I write, special investigative counsel Robert Mueller moves ever closer to nailing Mr. Trump himself for the impeachable crime of obstructing justice—namely, for his increasingly transparent efforts to end probes into Kremlin interference with last year’s presidential election, made all the more suspicious by the momentary president’s apparent “bromance” with Russia’s President Putin.

In exchange for his greatly reduced prison sentence, General Flynn pleaded guilty and agreed to coöperate with Mr. Mueller’s ongoing investigation. In light of the general’s agreement to “sing like a canary,” per the parlance of racketeers, the temporary president has stopped insisting that “the Russia thing” is “fake news.”

Perhaps, too, Donald Trump will realize that We the People, per the parlance of the U.S. Constitution, are on to him. Already, sales have dropped off the cliff for his oversize baseball caps featuring the acronym M.A.G.A.—per his campaign slogan “Make America Great Again,” an echo of Adolf Hitler’s campaign slogan of 1932: “Make Germany Great Again.” Certain wags in Washington have suggested a substitute meaning for the M.A.G.A. acronym—“Mueller Ain’t Going Away.”

Further, Donald Trump may come to know that We the People outnumber him and whatever sycophants he has left who are unequipped with ankle monitors. Unless he somehow wangles another welcome to Britain, he will notice when We the People demonstrate our power on Saturday, January 20, 2018—the one-year anniversary of his regrettable inauguration. On that day, we will march in Washington and cities from coast to coast to demand his impeachment and removal from office.