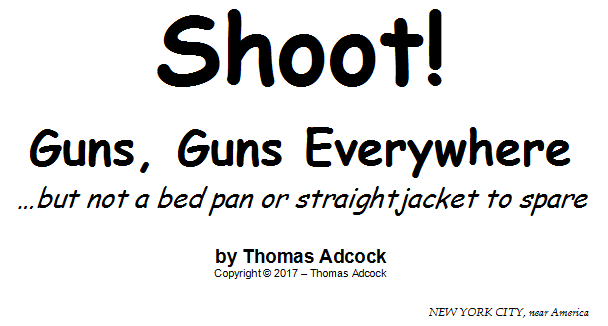 I shall not now dwell upon the daily caboodle of news involving an orange-faced hoodlum with a soft spot for swastikas—he who presides over an imploding White House. Were there simple justice in America—a nation where uniformed nazis and kluxers armed with semiautomatic assault rifles and side arms are now free to march through the streets of Charlottesville, Virginia—this despicable man would be in prison, along with his flock of fools and felons. We hope for their imminent departure from the nation’s capital, preferably in manacles, and a time that we may accordingly feel cleansed of the civic degradation that is their spoor.

—Alas, I understate my contempt.

Today instead, I implore my fellow Americans (and those throughout the world who have affection for us) to consider an acute threat to healthy life in these United States: a pestilence we have been conditioned to regard as a normal, albeit sorry fact of life. We somehow refrain from holding political leaders accountable for their cynical indifference to this festering though largely preventable disease.

I speak, of course, of America’s nonpareil gun violence.

Following are a few murderous metrics compiled in the most recent study of gun slaughter conducted by Everytown for Gun Safety, a New York-based nongovernmental organization:

As a matter of law, only privately funded agencies such as Everytown may track gun deaths and maimings in the U.S.— serious matters of public health in obvious need of governmental attention. Yet for the past two decades, the federal government’s chief public health bureau—the Centers for Disease Control & Prevention (CDC)—has been forbidden by Congress from cataloguing the corpses and casualties associated with the country’s gun madness: this in accordance with the so-called “Dickey Amendment,” applied to the annual Omnibus Consolidated Appropriations Act. Year after year, Republican Party lawmakers prevail over Democratic Party objections by insisting on maintaining the Dickey dictum, formally known as Public Law 104-108, which states that no CDC funds “may be used to advocate or promote gun control.” Heaven forfend!

The amendment’s namesake is Republican ex-Congressman Jay Woodson Dickey Jr. of Pine Bluff, Arkansas, famous for his opinion on the proper response to a sex crime rampant in his state, “I think incest can be handled as a family matter within the family.” Mr. Dickey died last April. Five years earlier, he had a come-to-Jesus moment regarding the Number 6 maxim of the Ten Commandments (“Thou shalt not kill”) as it relates to eponymous legislation he pushed in service to his corporate overlord—the National Rifle Association (NRA), the richest and most powerful and most feared lobbying groups in Washington. (And, to be sure, Mr. Dickey’s financial sugar daddy.) In 2012, the late congressman confessed his “regrets” for the amendment that bears his name, due to a pair of mortiferous events of that year:

In the wake of Aurora in 2012, just as in Columbine in 1999, Republican politicians controlled lock, stock, and barrel so to speak by the NRA found no pressing reason to strengthen America’s gun laws, such as they are. The massacre of teachers and six-year-old children at Sandy Hook Elementary was no more inspiring, legislation-wise: Republicans prevented attempts by congressional Democrats to broach minimal sanity in national gun policy, while Republican lawmakers in ten states actually broadened the “rights” of gun owners to accumulate ever more armaments—and to carry them openly in the streets, in houses of worship, on school campuses, at sporting events, and in establishments licensed to sell liquor.

But to be fair: Republicans are scrupulous in offering their “thoughts and prayers” to victims of gun massacres—defined by the Kentucky-based online database Gun Violence Archive as four or more persons shot, not including the shooter. According to the Archive, gun massacres in America occur on five out of every six days.

Copious thoughts and prayers from his partisans were offered last June to the family of Louisiana Congressman Steve Scalise, a leader of the Republican caucus in the U.S. House of Representatives who nearly died on June 14 at the hands of a lone gunman.

On that day, one James T. Hodgkinson of Illinois, an ardent admirer of liberal Democrats and distraught over last year’s presidential election result, was allegedly hunting for conservatives to kill. Apparently, he found his quarry in a suburban Washington athletic field as they practiced for a charity baseball game. Officers of the Capitol Police Department, on routine guard duty, said Mr. Hodgkinson opened fire with a high-powered assault rifle, seriously wounding the Louisianan.

To a lesser extent, two officers were wounded in an exchange of gunfire with Mr. Hodgkinson, whom they killed. Were it not for the Capitol Police presence, several more Republicans would have been shot—perhaps fatally.

—Postscript: Special Agent Crystal Griner of the Capitol Police, an African American lesbian, was one of five heroic Capitol Police officers who prevented a ball field massacre last June by “running through bullets” at the late Mr. Hodgkinson, as witnesses described it, in defense of Republican lawmakers. Ms. Griner was one of the wounded officers; she is still hobbling around on crutches. On July 26, Ms. Griner and her colleagues were awarded presidential medals of valor in a White House ceremony hosted by the Oval Office seat moistener himself, well known for anti-LGBT sentiment. (Shortly thereafter, he issued an executive order to rid the American military of transgender servicemen and women. As a practical matter, top military commanders have essentially ignored the order.) At the ceremony, the president planted a light kiss on Ms. Griner’s cheek, to the horror of a number of Republican pols invited to the event.

Meanwhile, a Republican-headed subcommittee in Mr. Scalise’s House of Representatives considering next year’s public health spending bill once again rejected efforts by Democrats to quash the Dickey Amendment. Thus, the   continuance of a ban on CDC studies of gun-related homicide as an American illness in search of preventative policy. (Democrats have sought to reverse Dickey since last year’s attack on a gay nightclub in Orlando, Florida that killed forty-nine people, the nation’s deadliest mass shooting.)

As for Steve Scalise: After two months worth of multiple surgeries and long follow-ups in the intensive care unit of MedStar Washington Hospital Center, the congressman’s name quickly slipped off the front pages, replaced by Republican conniptions over the Patient Protection and Affordable Care Act (ACA), the tepid first steps toward universal health insurance coverage adopted in 2010 by former Democratic President Barack Obama and a Democratic controlled Congress.

News flash! On August 14, a suggestion emerged from Mr. Scalise’s office. Said Chris Bond, office spokesman, the congressman would not necessarily return to his post come September, contrary to rumor.

Following seven years of a Republican mantra to “repeal and replace” so-called “job-killing socialistic” Obamacare and Democratic skullduggery aimed at a fact-optional “gummint takeover” of “the world’s best medical system,” the ACA remains in effect. This is due to the absence of a coherent Republican alternative to what Democrats acknowledge as flawed health policy that might well be repaired were it not for a Congress that has become a parody of schoolboys wrestling in a mud puddle.

Try as mightily as they did, squabbling Republicans utterly failed to cut off affordable health insurance for as many as twenty-five million Americans who were never before insured. All the while, to be sure, the cursers enjoyed the finest, most comprehensive health insurance in America, available exclusively to themselves and their families. God bless congressional socialism.

The rest of us might logically have thought that seven years of Republican curses would have yielded something—anything—besides what was ultimately rejected by Republicans themselves in their ultimate post-midnight wrangling in late July: repeal now, and we’ll figure out something later.

Never once in all the wrangling was there so much as a whisper about gun slaughter as a public health issue. In view of Charlottesville, sure to birth repeat performances elsewhere across the fruited plain, voices must be raised, white racist militias tamed—

—and more bedpans and straightjackets found, with which to cart off the crazies and tend to the carnage. Carnage that has increased exponentially over the gory decades in concert with a sickening rise in gun sales, the shoot-first attitude of municipal police forces from coast to coast, newly militant and bellicose racism—and now a president from New York City who, unlike better than ninety-nine percent of us Gothamites, owns a concealed carry permit.

On any given day, my very own hometown man-boy embarrassment refuses to say if he’s packing. He leaves it to our imagination which of his two guns are snugged somewhere beneath the flaps of his suitcoat—the Smith & Wesson .38 special, or the H&K .45 caliber pistol.

Speaking of straightjackets, let us order up three in light of pending legislation in Congress—namely H.R. 367 “Hearing Protection Act,” and its companion Senate Bill S.59. This farcical statecraft, presented to us by a trio of NRA-backed Republicans, would repeal longstanding federal law requiring registration of gun silencers, a bit of stealth technology beloved by murderers.

The poor murderers and potential murderers are weary of having to navigate the registration process; besides which, their ears hurt from proximity to all the gunfire.

“This would be a boon to the gun industry, but it would be terrible for the country,” declared Senator Chris Murphy, a Connecticut Democrat and potential candidate in the 2020 presidential election contest. “Silencers are used to commit crimes. They are used to conceal the fact that you are firing a weapon. There will be more crimes committed—more people killed—if silencers are legalized.”

According to a survey by the Washington Post, the number of silencers has doubled over the past three years, to approximately nine hundred thousand by June 2017. But according to a televised report over CNN Television, that estimation is probably low: “Figure in the mountain of unprocessed applications…and the actual number legally in circulation would already be considerably higher.”

Those responsible for proposing the Hearing Protection Act are Senator Mike Crapo of Idaho and Representatives Jeff Duncan of South Carolina and John Carter of Texas. These men are mad. And so long as we allow them and others in government who suckle the NRA teats to roam the halls of Congress and despoil the Oval Office, so, too are we.