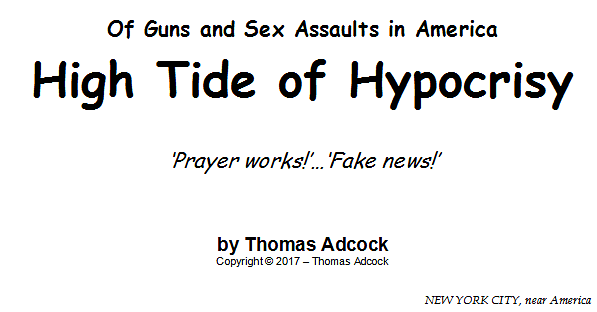 Autumn in America, and comes now a bumper crop of bullet-ridden corpses and exposés of child rape and long-ignored lechery—accompanied by sanctimonious sympathy, a mountain of mendacity, and a horde of hypocrisy. Consider:

—I hereby acknowledge my naïveté: Until news of phallic performances by Messrs. Weinstein and C.K., I had not known that some men attempt to entice women by way of the five finger shuffle.

Mr. Moore stands accused by two Republican-voting Alabama women of attempted rape some forty years ago when they were, respectively, fourteen and sixteen years of age and he was a 32-year-old county prosecutor. Three other women, likewise Republicans, say Mr. Moore made improper sexual advances when they were teenage girls. A number of sitting Republican senators have urged Mr. Moore to end his candidacy, including Senate Leader Mitch McConnell of Kentucky, who proclaimed, “I believe the women.” The candidate denies everything, claiming a political plot by Democratic Party operatives and associated heathens.

On the gun massacre front, leader of the pack of cheap pols sorry for all the gore is Congressman Paul Ryan, a right-wing Republican Party stalwart from small-town Wisconsin and speaker of the House of Representatives. Mr. Ryan felt himself and his important government position insulted by “liberal media” jeering about “thoughts and prayers” he extended in the wake of mass murder at a rural Texas church: twenty-six congregants slaughtered in their pews during Sunday morning worship by a man in legal possession of a semi-automatic combat-style assault rifle who, in one of his many previous bouts of rage, beat his wife and cracked the skull of his baby step-son. (The killer, whose evil name I shall not dignify with print, eventually blew his brains out.)

In a post-massacre interview aired on Fox Television, his party’s propaganda organ, the ever-partisan Congressman Ryan ignored the irony of his thoughts-and-prayers schtick in the context of a church full of soon-to-be-dead congregants bent in prayer to the Lord. He lambasted critics among the “media elite” for daring to question limited succor provided to grieving Texans.

“It’s disappointing, it’s sad, and this is what you’ll get from the far secular left,” said Mr. Ryan. Presuming journalists to be monolithically godless, he added, “People who do not have faith don’t understand faith, I guess I’d have to say. And it is the right thing to do is to pray (sic) in moments like this, because you know what? Prayer works. And I know you believe that, and I believe that, and when you hear the secular left doing this thing, it’s no wonder you have so much polarization and disunity in this country when people think like that.”

Notwithstanding his deep respect for religious faith and the power of prayer, Paul Ryan is an ardent disciple of the late atheist author Ayn Rand (né Alisa Zinov’yevna Rosenbaum, 1905-1982). Required reading for interns at Mr. Ryan’s congressional shop in Washington is Ms. Rand’s “Atlas Shrugged,” a novel of execrable prose in praise of unrestrained capitalism. Late in life, Ms. Rand changed her name for a second time—to Mrs. O’Connor, wife of failed actor Frank O’Connor—in order to collect Social Security, the old-age pension paid by a government she damned and decried. As a fellow government-hating hypocrite, Mr. Ryan’s entire life, save for a summer’s teenage job a take-out restaurant in Wisconsin, has been lived on a government salary or government social program.

As House speaker, Mr. Ryan is third in the line of succession to the presidency. Should the gold-coifed gangster president be forced from power—more a question of when than if—then followed by the political demise of his co-conspirator in criminal governance (the man-mayonnaise hybrid known as Vice President Mike Pence), Mr. Ryan will fold up the cot he sleeps on his Capitol Hill office to win a proper bed in the White House, currently home to Donald Trump.

Such change-up might constitute a sort of hypocritical u-turn. During last year’s presidential campaign, Mr. Ryan bashed Mr. Trump as the “textbook definition” of a racist, a man he would “not defend—not now, not ever.” Post-election, Mr. Ryan changed his tune and is, for the moment, one of the president’s more eager bootlickers. But maybe not tomorrow.

Mr. Trump has been accused of sexual assault and sexual harassment by at least sixteen women. Charges began with divorce proceedings in 1989 when the first of three Trump wives accused the future president of rape; in 1993, Ivana Trump, né Ivana Marie Zelnícková, publicly renounced the claim. During his 2016 campaign for president, fifteen more women alleged various instances of Trumpian sexual misconduct: Contestants on his “reality-TV” shows and in beauty pageants he owns say that he often wandered into dressing rooms to view semi-clothed young women.

A 2016 report compiled by former British intelligence officer Christopher Steele containing compromising material about Mr. Trump’s longstanding financial association with the Russian government and Russian oligarchs, the so-called “dirty dossier,” includes a section about the 2013 Miss Universe Pageant in Moscow. According to Mr. Steele, prostitutes engaged in theatrical urination atop a hotel bed for an audience of one: Donald Trump. Recently, Mr. Trump’s chief bodyguard—Keith Schiller, a former narcotics officer with the New York Police Department—testified before a closed House investigation committee, in which he told the congressmen that five prostitutes were indeed offered for the pleasure of his boss but were turned away.

Minus the “golden shower” episode, much else of Mr. Steele’s dossier has been confirmed. The salacious section could likewise be confirmed by a film Mr. Steele suggests was made by Russian operatives—the Kremlin “honey-pot squad,” agents adept at planting hidden cameras in hotel rooms.

Donald Trump says that all claims of his untoward comportment in the presence of women are “fake news,” an expression he further claims to have coined. He says he will “absolutely” file defamation lawsuits against all his female detractors, and maybe some in media. To date, there is no record of such litigious effort.

Which brings us to Roy Stewart Moore, former chief justice of the Alabama Supreme Court, president of the Foundation for Moral Law, potential Republican member of the U.S. Senate, and probable pædophile. 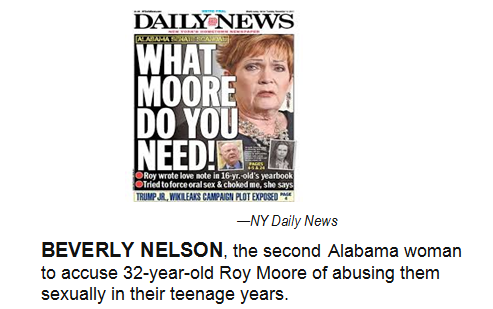 There may be no way to prove beyond reasonable doubt that Roy Moore, a god-fearing ex-judge, did what he’s said to have done to damage the adult lives of five Alabama women violated as girls by the man who would be senator. Two of the five—Beverly Young Nelson, 56, and Leigh Corfman, 53—have stepped forward to publicly recount their violations at ages 16 and 14, respectively.

But legal proof is not political proof. Ask the pariah Harvey Weinstein today. Ask Roy Moore after December 12, when he is either defeated at the polls or, should he win, on the way to being expelled from the U.S. Senate on grounds of moral turpitude.

In full Trump mode, meanwhile, Mr. Moore threatens to meet his accusers in court; undoubtedly, the threat should prove as empty as the president’s. On top of that, his supporters have sent “journalists” from the racist website Breitbart to Gadsden, Alabama, there to scrounge for disparaging information about Ms. Nelson, Ms. Corfman, and the others.

Mr. Moore did no favors for himself in an interview with a friendly right-wing TV host Sean Hannity, broadcast November 12.

Referencing both Ms. Nelson and Ms. Corfman, Mr. Moore told the viewing audience, “I’ve never known this woman, or anything with regard to the other [teenage] girls. I do recognize, however, the names of two of these young ladies.”

Of one particular “young lady” known to Mr. Moore at the time he was employed as an Etowah County prosecutor, he said, “I don’t remember going out on dates. I knew her as a friend. If we did go on dates, then we did.” Whereupon, he was asked point-blank: As a grown-up lawyer is it your custom to date teenage girls? Mr. Moore’s response: “Not generally, no.”

Messrs. Moore and Weinstein are righteously ruined bookends to a welcome new era, one in which violated women now own the strength and confidence required to confront the stone-age piggery of too many of us men; strong confidence born of their finally—finally—being simply believed.

And yet, hypocrisy is a complex power.

Let me explain. First, hear what Donald Trump said about women one month before Election Day 2016, as caught on a tape recording heard everywhere in America—

She used to be great. She’s still very beautiful. I moved on her, actually. …I did try and fuck her. She was married. …I moved on her like a bitch. …I see her, she’s now got the big phony tits and everything. She’s totally changed her look.

—Now try to wrap your head around the following: Dozens of women, all white, accused Donald Trump of sexual assault and were not believed; sixty-two percent of white women voted Trump; of that sixty-two percent, five were Roy Moore’s victims—five Alabama women who consciously voted for a pig, despite what they shared with other women who know the secret hurt.