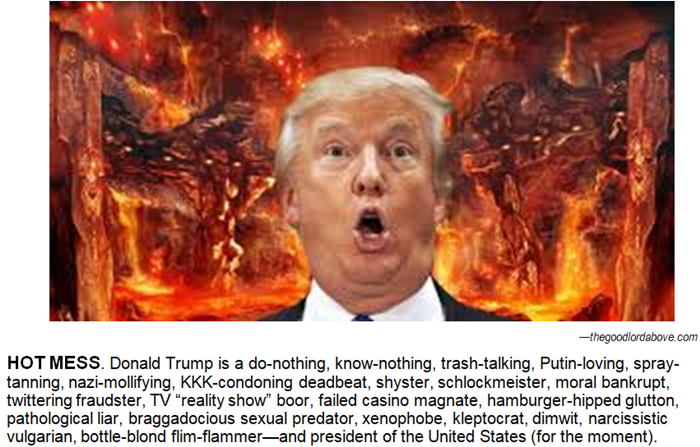 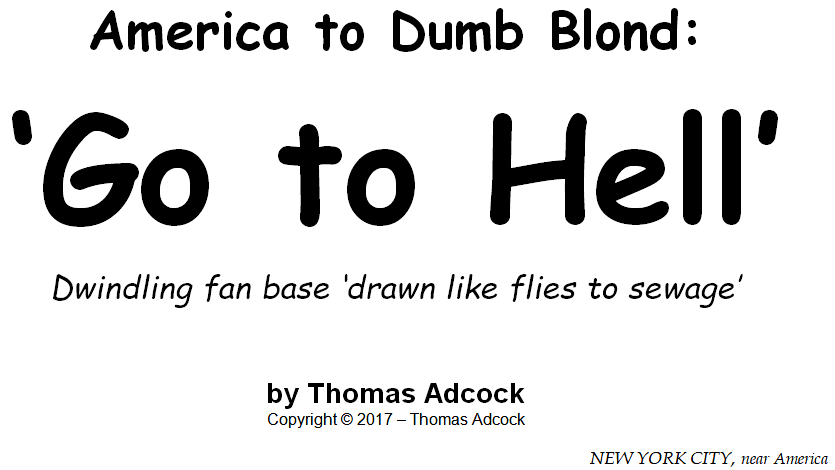 As a member of the American journalistic fraternity, Donald J. Trump labels me a “damned dishonest” purveyor of “fake news,” in league with “crooked bad people” who clearly despise the United States. Be duly warned! As Dorothy and Scarecrow intoned whilst traipsing through a scary forest in the Land of Oz, “Lions and tigers and bears, oh my…!”

Last month in Arizona, during a rip-roaring rally of his fascistic flock, the president of the United States elaborated on his dim view of the likes of myself: “I really think they don’t like our country. I really believe that.” Earlier this year, he denounced us gazetteers as “enemies of the people,” word for word an echo of his progenitors in tyrannical scorn: Josef Stalin and Adolf Hitler, both blessedly gone to Abaddon—

Speaking of eternal damnation, let us turn back the calendar to that lovely time when Mr. Trump was a dismissible crudity among many candidates for the Republican Party’s presidential nomination. As reported on December 8, 2015:

“You know how to make America great again? Tell Donald Trump to go to hell,” Graham said on CNN-Television’s “New Day” program, picking up on the [Republican] front-runner’s famous slogan.

The South Carolina Republican was responding to Trump’s statement released Monday calling for the U.S. to ban all Muslims from entering the country.

“He’s a race-baiting, xenophobic, religious bigot,” Graham told [interviewer] Alisyn Camerota. “He doesn’t represent my party. He doesn’t represent the values that the men and women who wear the uniform are fighting for. … He’s the [Islamic State of Iraq and the Levant] man of the year.”

Over these painfully long eight months of the Trump regime, most Americans have come to appreciate Mr. Graham’s prescience. Donald Trump may escape prison bars, but we’re rooting for Lucifer’s brand of justice. Meanwhile, we are taking a sober measure of this very odd and very dangerous president: of his character, his disregard of constitutional law, his damn-the-expense aim to build a continent-wide concrete wall along the U.S.-Mexican border, his passive reaction to murderous street violence last month in Charlottesville (fomented by nazis and the Ku Klux Klan) and his hétéroclite appeal among America’s lumpenproletariat.

Most Americans—those sixty-six percent of us who robustly disapprove of the president’s behavior and policies, according to the latest Gallup poll—now realize the sorry mistake of Mr. Trump’s election. New York Times columnist Bret Stephens suggests that we should have realized the stench of Donald John Trump well before Election Day last November.

Everywhere in the nation’s newsrooms, computers are clacking up a chronicle of daily outrages that spew from the mouth of Trump, or his Twitter account. Beginning with the “America First” pledge of his January inaugural address, a locution redolent of 1930s fascism on these shores, they are no less noxious at this time. Among them, a small selection of things Mr. Trump has said and done since January:

—As if the foregoing were not sufficiently disgusting, behold how Mr. Trump closed out his summer of shabby conduct:

From the August 26 issue of “Current Affairs,” a magazine of American politics and culture: “Joe Arpaio’s actions over the course of his time in office were monstrous and sickening. As Arpaio’s officers were harassing, detaining, and beating citizens and non-citizens alike, with jail employees routinely calling inmates ‘wetbacks’ or leaving them to die on the floor, Arpaio let hundreds of serious sexual abuse cases go uninvestigated, in one case resulting in a child being continually raped. …Some of Arpaio’s acts bordered on the psychopathic: In a deranged reëlection plot, Arpaio oversaw a scheme to pay someone to attempt to assassinate him…so that he could entrap the fake ‘assassin’ and send him to prison.”

Even Donald Trump could sense in advance the negative reaction to this particular indecency. Thus, he was not man enough to personally announce the DACA rescission. To face the press, he instead he sent forth Attorney General Jefferson Beauregard Sessions III, whose first and middle names are homage to prominent slave-masters of the old-timey South who launched the American Civil War (1861-65), which remains the nation’s bloodiest.

Sure enough—as with public backlash over the Joe Arpaio pardon, judgment on the DACA rescission was swift and stinging. Barack Obama led off in calling it “cruel,” adding: “To target these young people is wrong—because they have done nothing wrong.” Harshest of all was a statement from Steven Goldstein, executive director of New York-based Anne Frank Center for Mutual Respect:

Donald Trump and Jeff Sessions put a grenade in the hands of the Statue of Liberty…Sessions, himself with a racist past, was the perfect person to deliver today’s grotesque announcement of human cruelty and unconscionable prejudice. … Donald Trump and Jeff Sessions will go down in history as among America’s all-time civil rights and human rights villains. And the sick part is, they just don’t care.

To no one’s surprise, Mr. Trump has not seen fit to apologize—for anything. Nor has he ever forthrightly asked God’s forgiveness, despite his professing to be a devoted fan of Jesus Christ. John Calvin “Cal” Thomas, the syndicated newspaper columnist and religious scholar, suggests that this evident lack of humility is antithetical to Christianity, which holds repentance to be a precondition to salvation.

Short of repentance, Mr. Trump told delegates to the Christian-infused Family Leadership Summit in July 2015 that he takes Holy Communion, which he described as “[w]hen I drink my little wine, which is about the only wine I drink, and have my little cracker; I guess that’s a form of asking for forgiveness.” Though he lived in the 19th Century, English poet and novelist William Makepeace Thackeray (1811-1863) understood such a character as Donald John Trump. From Chapter 35 of “Vanity Fair,” his masterpiece, Mr. Thackeray presaged an insolent American presidency that soon, we pray  might soon see him given warm welcome by Beelzebub:

He firmly believed that everything he did was right, that he ought on all occasions to have his own way—and like the sting of a wasp or serpent his hatred rushed out, armed and poisonous against anything like opposition. He was proud of his hatred as of everything else. Always to be right, always to trample forward, and never to doubt, are not these the great qualities with which dullness takes the lead in the world.