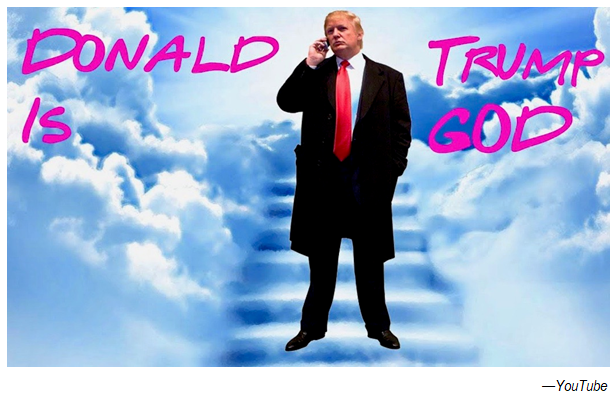 Gladdening the Heart of Lucifer

Scheduled to open in October in more than a thousand “select” American cinemas is a motion picture entitled “The Trump Prophecy,” produced by Liberty University of Virginia, a bottom-tier institute of 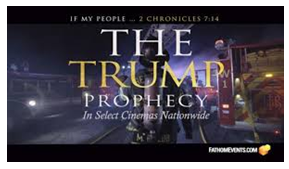 evangelical Christian instruction. The university is hustling advance ticket sales via online movie trailers meant for the mesmerizing pleasure of stalwarts in a religio-political cult whose lord and savior is said to have descended from a golden penthouse atop a Manhattan skyscraper to bivouac in the lowly White House, from whence he shows us the Truth and the Way—jihad against “the swamp,” as he calls our federal government.

The film’s central inquiry: Did God in Heaven play a rôle in the presidential election of 2016 by sending us Donald John Trump, he of the yellow coif and orange face? Such premise is based on the mystical experience of retired Florida fireman Mark Taylor, who claims that God spoke to him one fine day in April of 2011. As published in The American Conservative magazine in May of this year, here are excerpts from Mr. Taylor’s affadavit in support of a book he authored, upon which the low-budget flick is based:

The Spirit of God says, ‘I’ve chosen this man Donald Trump for such a time as this.’…The spirit of God says the enemy will quake and shake, and fear this man…This man knows all our tricks and schemes…I will use this man to reap the harvest that the United States has sown for and plunder from the enemy what he has stolen, and return it back sevenfold…This

man’s word is his bond and the world and America will know this, and the enemy will fear this, for this man will be fearless. The Spirit says when the financial harvest begins so shall the parallel in the spiritual for America. The Spirit of God says in this next election they will spend billions to keep this president out. It will be like money down the toilet. Let them waste their money, for where it comes from is being used by evil forces (sic). They will say things about this man, the enemy, but it will not affect him and they will say it rolls off of him like a duck (sic). For even as the feathers of a duck protect it, so shall my feathers protect this next president. Even mainstream news media will be captivated by this man and the abilities that I gift to him, and they will even begin to agree with him, says the Spirit.

Apostates would say that Vladimir Putin in the Kremlin had more to do with Donald Trump’s victory. That and a round-the-clock diet of right-wing bloviations on Fox Television, propaganda organ of Mr. Trump’s Republican Party. Besides which, how ironic that God’s purported choice would be perhaps the most sinful of His creations

Personally, I think Mr. Trump has higher aspirations than the U.S. presidency, or any other Earthly office. I think He believes He is already God, and that many believe He’s right—certainly the sixty-three million Americans who voted for him in November 2016, an unholy number of them being hooey-plagued true believers à la Mark Taylor.

By the way, who says God must be a force for rectitude? Donald Trump has lived his seventy-two years as grifter, deadbeat, liar, landlord, and legendary roué. But then, did not the only begotten Son of God, though younger in days of yore when he trod the sands of Galilee, play hide-the-salami with naughty Mary Magdalene?

The aforementioned cult, the Church of Trump if you will, is reverentially devoted to the Christian tradition of forgiveness, if not confession. This available nicety applies, conveniently, to a man who has not confessed a single one of his multitudinous sins, carnal or venal; a man proud of such record.

A Republican choir that sings paeans to “family values” is ever eager to forgive The Lord Donald, ad infinitum—wife after wife after wife; pornographic film actress after pornographic film actress; girly magazine model after girly magazine model; fraud after fraud after fraud; bald lie after bald lie. According to the Gallup Poll, some eighty-seven percent of Republicans applaud Mr. Trump’s presidency—an approval rate higher than even Saint Ronald Reagan could muster. Mr. Trump is perpetually forgiven for un-Christian conduct, and for blasphemies such as:

Pugnacious and black hearted as he may seem in his vile Twitter dispatches, adoration of murderous thugs Kim Jong-un and Rodrigo Duterte, and spittle-laden campaign sermons, Donald Trump can be a forgiving sort—at times. Most assuredly so when it came to granting presidential absolution so far this year to a trinity of supporters who ran afoul of the law:

A merciful Mr. Trump issued full pardons—“Ego te absolvo,” as a priest would say—to these shameless men: Joe Arpaio, an anti-immigrant sheriff in Arizona so racist that even his solidly Republican district voted him out of office was convicted for refusing a federal court order to halt discriminatory police conduct toward Latinos; Dinesh D’Souza, extreme right-wing media blowhard and vile racist who called President Barack Obama a “boy from the ghetto was convicted of brokering patently illegal campaign contributions to a Republican office seeker; and “Scooter” Libby, assistant to former extreme right-wing Vice President Dick Cheney who was convicted of perjury and obstruction of justice during a 2004 federal investigation into the politically motivated exposure of an undercover agent of the Central Intelligence Agency whose husband is—horrors!—friendly with members of the opposition Democratic Party.

Should Mr. Trump awake on the wrong side of his bed—a place where the current missus, Melania, is seldom (if ever) found—he takes time from a hectic schedule of sulking, golf, television, chitchat with Russian oligarchs, and cheeseburger consumption to indict a rotation of well-known individuals as “loser” or “dummy” or “sleazy” or “total loser.” (His glossary of opprobrium is modest.)

Of journalists in general, Mr. Trump borrows from the late Josef Stalin and Adolf Hitler in damning us as “enemies of the people.”

As poet laureate of the frenzied anti-immigrant zeitgeist here in America, now comes Ms. Coulter with a timely screed entitled “Adios America.” In it, she poses a classy question: “Why do we let blind people and people in wheelchairs become citizens? I feel sorry for cripples, but that doesn’t mean I want them in my country.”

Of late in the celebrated land of the free and home of the brave, parents from Mexico and Guatemala and Honduras seeking more for their children’s future than grinding poverty, domestic abuse, government or gang brutality are hassled at the U.S. border by agents of Immigration and Customs Enforcement—known as I.C.E., as Orwellian an acronym as there ever was.

As my Irish great-grandfather Ben would say of immigration policy instituted by Mr. Trump and his principal enforcer, Attorney General Jefferson Beauregard Sessions III, “It gladdens the heart of Lucifer.” (Opa Ben also said of landlords, “They ain’t lords of the land, they’re the scum of the earth.”)

Chief among the policy points is separating children from their parents—in at least one case, an infant girl while being breast-fed by her mother—and locking them up for unspecified periods in what mainstream media declines to rightly name: concentration camps.

It is June 16 as I write. According to a mouthpiece for the president’s wicked regime, the number of incarcerated migrant children has reached 1,195 over the past forty-six days. Some are “housed” at military bases, some at makeshift dormitories in abandoned commercial buildings, some in open-air compounds caged in cyclone fencing. All weep for their missing parents. The Lord Trump Almighty giveth, and taketh away.

Wherever the children may be, for however long under lock and key, all must behold a giant image of Lord Trump Almighty every day, accompanied by a snippet from his ghostwritten book, “The Art of the Deal”—thoughtfully rendered in English and Spanish. In the context of Donald Trump’s attempted eviction of troublesome tenants standing in the way of his razing their humble homes to make way for yet another of his cheesy high-rise apartment buildings for the rich, the landlord wrote, “Sometimes by losing a battle you find a new way to win the war”—A veces al perder una batalla, encuentras una nueva forma de ganar la guerra. 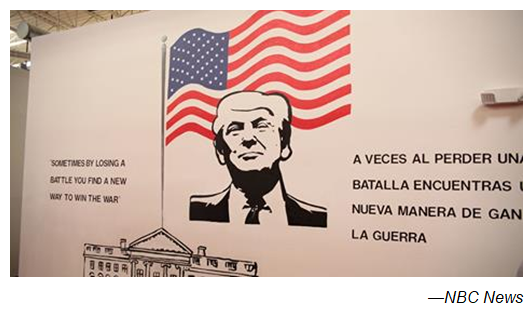 Cyrus, the pagan Persian king who was known as “the Great” conquered Babylon in 539 B.C., freed the Jews and returned them to Jerusalem where they would rebuild their main temple. Though surely not one of God’s purest creations, as Christians of all persuasions would attest; nevertheless, he served God’s people. So the theory goes as applied in 2018 A.D. to Donald J. Trump.

The belief that a politician is the subject of biblical prophecy provides him or her with rock solid authority. Among the most ardent believers in such twaddle, Mr. Trump was known as Cyrus.

I put my own trust and belief in the better angels of America, both secular and religious. Further, I am

confident that between today and November 6, when our better angels vote in mid-term federal elections, the world will hear a mighty trumpet call of resistance to a false god. Among leaders to that charge is the Rev. William Barber of North Carolina who heads the “Poor People’s Campaign: a National Call to Moral Revival,” so named to honor the late Rev. Martin Luther King Jr. in honor of the original 1968 campaign that flooded the streets of Washington with citizens grown sick and tired of political rot wrapped in flags and bibles. Mr. Barber understands that are weary as a people, but he offers a rousing challenge: “We lose only when we get quiet.” 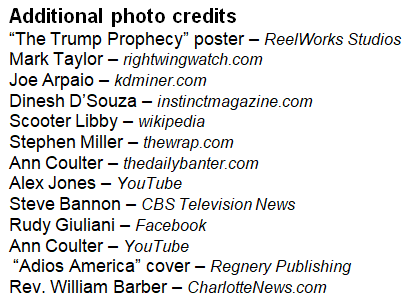