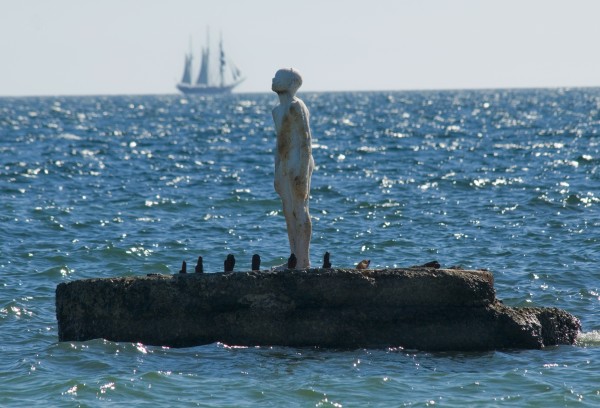 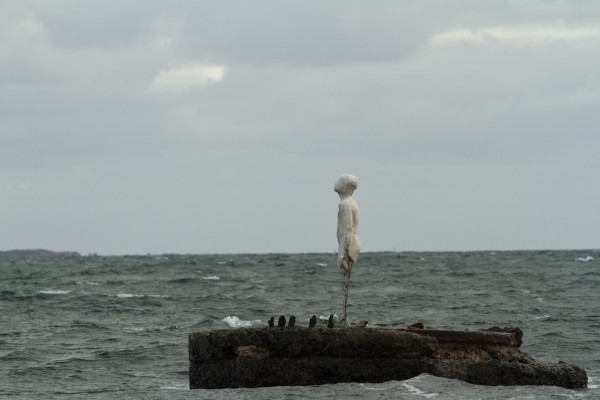 One afternoon in the late 1990s I sat on the back veranda of my friend Bernhard’s house and watched the men swim across the river. He lived on the border of Austria (and therefore the EU) and Slovakia. The border was a narrow river that could be waded across. Out the front of Bernhard’s house the border police patrolled the nearby streets, sometimes chasing the immigrants on foot across the cabbage fields. This went on all day and all night, according to Bernhard. It was normal and hardly remarked upon in the local media.

Back in my native Australia, the number of refugees arriving was by contrast causing concern. Fleeing Saddam Hussein’s regime in Iraq, and the Taliban in Afghanistan, people smugglers were getting the refugees onto leaky boats to make the perilous journey across the sea from Indonesia to northern Australia. For Australia, this new influx of largely Muslim men was not normal, and the resulting panic was capitalised upon by a conservative government eager to attract voters from the more right wing and anti-immigrant parties. The cultural politics behind this strategy are complex, and date back to an historical sense of vulnerability relating to Australia’s existence as a minor white population on the fringes of a populous Asian continent, and the resulting fear of invasion. 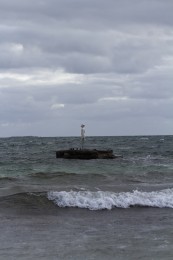 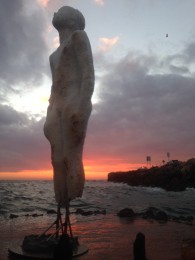 The Australian government’s response, and one that lately has bipartisan political support, was to effectively visit group punishment upon all new ‘illegal arrivals’ by incarcerating them in detention camps, initially on the Australian mainland and more recently offshore in Papua New Guinea and the tiny Pacific island nation of Nauru. This period of detention lasts as long as the application process takes to become officially recognised as a refugee, which in some cases is many years, and even then doesn’t allow for resettlement in Australia if the refugee arrives by boat (the refugee has a choice of resettlement in either PNG or Cambodia.) This detention applies to children as well as their parents, and despite the damage to physical and mental health being amply demonstrated and reported upon, the policy is not going to end anytime soon. The cruel paradox that the Australian government depends upon by enforcing mandatory offshore detention relates to the fact that the harsher the conditions of detention, and the more indirect harm is done to the detainees, then the less likely it is that future refugees will consider Australia a suitable destination. The practice is also politically popular with Australian voters – the reason that mandatory offshore detention is now bipartisan policy across both the left and right major political parties.

The removal of asylum seekers from public view also necessarily places them ‘out of sight and out of mind.’ Their shared humanity and the tragedy of their personal stories are therefore never available, even for those who might sympathise with their plight. Their names are not known. Their faces are not seen. Their voices are not heard.

Many Australian artists have sought to represent that which is hidden from view, as a reminder of the elemental humanity of those incarcerated and a reminder of what is being done in our name. One of the more successful artworks in recent times to demonstrate the power of art to disturb, and to bear witness, and to haunt a public space – an artwork whose presence invokes a powerful absence, and an absence which in turn invokes a powerful presence – belongs to Western Australian artist Simon Gilby. Like all good public art, his sculpture Entitlement 1, made of salt and stainless steel, one hundred and fifty five centimetres tall, not only succeeds in inviting a multiplicity of responses while referring directly and indirectly to the physical and social history of its specific site, but is also a powerful reminder of human vulnerability in the light of recent government policies. 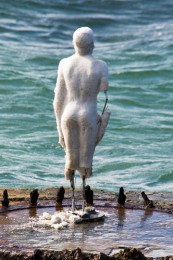 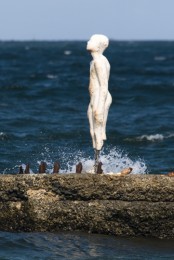 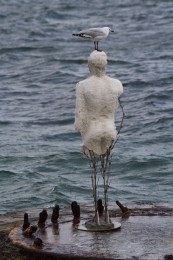 Gilby’s Entitlement 1 directly references the loneliness and anxiety of the stateless subject, but in its modern context and the multiplicity of readings it invokes, in its transitory form and ethereal aspects, it is also an aesthetically haunting work. These qualities gather to the salt figure, cast from the body of a ten year old boy, essentially by virtue of its materiality, its positioning and transformative properties. Bolted onto a small concrete island, an abandoned gun turret at Bathers Beach, Fremantle, the salt-boy stands as both metaphorical invitation and physical representation; a creature of sensual connection as much as of matter.

From the moment of its placement the figure was responsive to its material conditions, decaying by the hour, albeit silent in its response, and in silence inviting response. Sculpted in the human form, with its feet in the sea-spray; a heat-forged figure baked by the sun and burned by the wind, licked by the tongues of waves, the salt-boy returned to this source over the passage of several months. 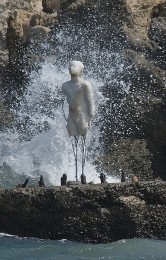 Its temporal passage and elemental subjectivity invoke a complexity of experience, in particular around notions of dissolution and decay, of departure and return, of essence and connection. It stands at the site of the littoral, speaking to both the limiting possibilities of a patrolled border, on a coast seen as the front line of Australia’s Border Protection program, with its refugee boat ‘turn-backs’ and detention centre on Christmas Island to the north, but also in its solitude and vulnerability, Entitlement 1 speaks to a more illuminating potential as a site of immersive understanding.

In light of the work’s title, it is a considered placement, shrouded in its vigil silence, on a gritty-industrial concrete island, scarred with remnant rust and harking back to its military origins, at the entry point of white settlement. By Gilby’s description, the salt figure is a totem of elemental humanity, stateless and vulnerable prior to the ascription of rights and entitlements according to accidents of birth. But what is the figure entitled to, by virtue of its placement, on an island of its own? And what, the artist asks, are our own entitlements, and how did we come by them?

To this end, the work resonates with particular meaning in the context of Australia’s asylum seeker policy in particular, where refugees are placed into detention camps and black sites, on distant islands of their own, away from the public gaze and the legal entitlements of its citizens.

More broadly, the materiality of Entitlement 1 also references the environmental issues most relevant to Western Australia, of salinity and deforestation, and more generally the issue of oceanic pollution. While salt is the defining matter of the ocean, in Western Australia it is also an ancient remnant of the once-hinterland seas. In its suspension in the former, salt water is always mobile, subject to oceanic current and tidal flux. In its manifestation of the latter, the primeval sea-beds of inland Australia; salt is both static and buried, until disturbed, when it rises to the surface and poisons the land. In between these two possibilities is the invisibly air-born; salt that can be tasted on the wind, settles on the land, on the skin. In this way, the image of the salt-boy speaks both to the motility of the material and the instability of the boundaries between land and sea, stone and water, conscious and unconscious, self and other.

For more than 120 days the artwork’s transfiguration from human form to remnant tree invoked the life-cycle of the sculpture’s immediate environment, situated in one of Earth’s most ancient, bio-diverse, but fragile eco-systems. In this sense, the erosion of the human form by the natural elements of wind and water is a patient and startling revelation of an original material condition. It speaks of a return to source, hinting in the process at the transmigration of human materials, in particular the toxic flushing of invisible micro-plastics and other waste-products into the ocean. 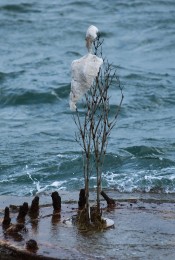 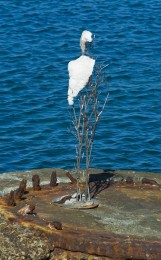 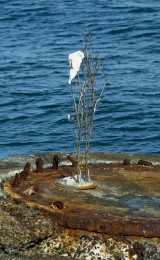 This representation of first principles, in essence the depiction of a landscape absent of the human figure, is suggestive of both the brevity of the human lifespan in relation to the location’s longer historical reality (which existed in a state of botanical quarantine for some hundred million years before human arrival) and a devastating image of a potential future encompassing climate-change and oceanic pollution.

Entitlement 1, by this reading, also hints at the primary existential feeling of a solitary and vulnerable figure, whose transubstantiation into a more ancient and enduring life-form ultimately reflects a broader and deeper societal and environmental malaise, holding up a mirror to what might be lost. As the vulnerable figure recedes, as the memory of those asylum seekers lost at sea and imprisoned on islands out of sight and out of mind is invoked; a reminder that our entitlements are essentially accidents of birth, denied now to others; as the imagery of the flushing of invisible micro-plastics is suggested materially and metaphorically; the figure of the tree endures – inviting responses that might be hopeful, might be real.

NOTE: Simon Gilby’s work Entitlement 1 was displayed as part of the exhibition, ’sculpture@Bathers‚ 2015  and remained in situ for more than 120 days. Photographs of Entitlement 1 taken by Roel Loopers.

David Whish-Wilson is a novelist, essayist and reviewer whose most recent publication is the Perth book in the NewSouth Books city series. His next novel, Old Scores, will be published by Fremantle Press in 2016. He lives in Fremantle, and coordinates the creative writing program at Curtin University. Seine Internetseite.

Simon Gilby is an artist living and working in Fremantle WA, his work is represented in both public and private collections. His sculptures have been commissioned for major public artworks and he currently teaches at UWA. Seine Internetseite.