When Your Number is Big

Like most people, I have a great deal of trouble comprehending very large numbers. We read that there are between 100 to 400 billion stars in the Milky Way Galaxy and a like number of galaxies in the universe. How about Nonillion, Octillion or Decillion?  And at a dinner party someone explains that we have 100 billion neurons in our brains and over 100 trillion synapses, and we can’t decide on whether to have a second helping of rice. There are over a billion Chinese and over a billion Indians. They all want what you have—car, air-conditioning, holidays to exotic beaches, restaurant dining, iPhones, designer clothes and watches. But I have no idea what those numbers actually mean. 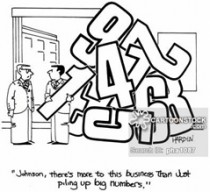 That’s no surprise. Most people have trouble with numbers, small or big. It may be that evolution never intended for us to worry about numbers beyond our fingers and toes. That would have been good enough in most cases. You go to the bank, take one of those slips from a machine and look at the digital number displayed to figure out how many people are ahead of you in the queue. We can do that pretty well. And because we can figure out that simple math and how that translates into waiting time, we have believed that we can handle numbers.

In reality, an overwhelming number of us fail to appreciate that we have crossed a numbers frontier and have entered a new terrain where the sheer size and complexity of numbers are shaping our modern lives in multiple ways. From our personal investment decisions to the deciding whom to vote for in an election , our expectations from politicians, leaders, and policy makers are increasingly connected with understanding the math than the personality behind the policy. 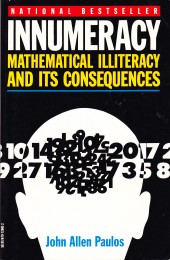 The problem is how slow advance in numeracy has left most of us at a distinct disadvantage in a modern scientific age where probabilities, big numbers, and percentages test the upper limits of our cognitive abilities. John Paulos’s classic book Innumeracy: Mathematical Illiteracy and Its Consequences  sounded the alarm more than twenty-five years ago. This brilliant book remains widely read and cited, but if anything, innumeracy has increased during the period since it was published and the world of huge numbers has proliferated like a third-world dictator’s watch collection. Numbers only tell part of the story. It is numbers combined with our illusion of superior wisdom that makes for a toxic brew. In other words, rather than being humbled by numbers we can’t understand, the opposite seems to happen—we become more dogmatic and certain.

A few examples will show the nature of our insoluble problem.

Cornell University psychology professor David Dunning was part of the duo who came up with the Dunning-Kruger effect. This happens to be one of my favorite cognitive biases. Not a day goes by without witnessing countless examples of unskilled people, officials, politicians, pundits, leaders display their illusion of superiority in knowledge, vision, policy decision making, predictions, and advice. They mistakenly rate their ability as superior and expect others to share that illusion. The fact they can’t recognize their own ineptitude is part of the Dunning-Kruger Effect.

Professor Dunning is back with more damning evidence of how this illusion of superiority is alive and well. Managers and supervisors rate their managerial skill, and then employees and peers rate the managers and supervisors skill. Guess what? There is no correlation between the two ratings. Managers psychologically can’t resist overrating their skill and talent, as they believe their view isn’t an illusion but an objective fact. That makes sense as CEOs and managers are paid because a board of directors also believe the top dog has superior managerial skill and cuts them large pay cheques for sums we only vaguely can comprehend. Professor Dunning’s research unearthed that 32% of engineers in a software company and 42% in another such company believed they were in the top 5% in terms of skill and quality.

The illusion persists for a couple of reasons: people fail to be honest about their weaknesses and their identity is linked with their strengths minus the weaknesses. Point out a weakness of anyone and watch the psychological defense mechanisms kick into place faster than a North Korean reply to a UN Human Rights Commission report. 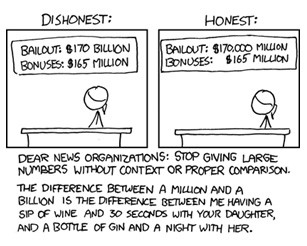 Here’s the executive summary: We are bad at big numbers, we have huge egos and monumental sized vanity shields protecting us from our weaknesses, as we go about the daily tasks of misclassifying, underestimating others and overestimating ourselves. We bring these cognitive resources and biases to forming opinions on a wide range of issues from climate change, health insurance, and the risk being killed in a terrorist attack. Add the ideological filters and the realm of numbers become entangled with our belief system, representing what we wish the world to be rather the world as it is.

It gets worse. Those who earn their living based on getting the math right, mostly get it wrong. Check the record of economists predicting inflation or deflation, unemployment, market trends, and you see the fingerprints of Dunning-Krueger Effect all over the Excel files. Economists failed to predict the global financial crisis in 2008. (see here) In the world of casinos and professional gamblers they would have gone bust; but in the world of economists, we are left to think that Pinocchio must have been a fable about an economist.

Religion is a great place to bring perspective to the abstract idea of big numbers. Let’s leave the rarefied atmosphere of billions and trillions and drop down to the lower levels of tens of thousands. We still have trouble dealing with numbers of that size. Wikipedia has a page informing us that there are 41,000 different Christian denominations. That’s not a misprint. There are, according to Wiki, 41,000 different Christian denominations. Not 41,000 denominations of all religions, this is just the Christians. Do you have any idea how big the number 41,000 is? Visualize a traditional Thanksgiving dinner at your house and let’s say you’ve squeezed in 23 relatives around a table. You can’t breathe for all the body heat generated around the table. Twenty-three people around a communal table is a large number but one we can comprehend. But compared to Christian denominations, 23 is a mere rounding off error. Even in small numbers people disagree about many things. So it should come as no surprise that Christians are forever disagreeing on the nature of Jesus, virgin birth, no virgin birth, what are curse words you can and can’t use, whether the pope can turn out any doctrine he wants and call it god’s word.

Does anyone believe that there are 41,000 ways to use a hair dryer? Or cook an egg? Or make soap? Or manufacturing cars? Or cleaning a monkey’s cage at the zoo. Anyone who held such a belief would be hauled off as insane, eccentric, unstable, or a fourteen-year in his locked room behind a computer screen. But when it comes to religion, we shrug off our insanity awareness detector and accept this state of disagree on all matters concerning exactly who is and what he stands for and what he would accept as right and wrong, a Christian god.

Scientists never say there are 41,000 competing theories of gravity or general relativity or 41,0000 versions of Darwin’s theory of evolution. No there is just one theory and a handful of rival hypothesis. We seem to be able to cut big numbers down to very small number only if what is at stake can be measured and repeatedly tested countless times and each time the theory survives being falsified. That doesn’t mean a theory can’t be overturned or modified, only so far our theory of gravity, general relativity and evolution describes a testable reality.

Fantasies are not testable. Religious beliefs are not testable. You can fill in the logical connection. This is why religious dogma, stories, beliefs can last for thousands of years. They can never be disapproved but every few years someone comes along with a new belief of what Jesus meant by what he reportedly said hundreds of years before it was actually reported. That is an advantage that religion enjoys. Like in writing any story, there will be fans, critics, and detractors. It just so happens the fan base for the Christianity story has spawned tens of thousands of slightly different understandings that makes its story superior and more true than the others.  Dunning Krueger Effect is in the fine point of dogma, too. We can avoid it even when thinking about the afterlife.

Back to the number of 41,000 and what it says about us, how we count things, divide up things and ideas, and base all kinds of assumptions on an abstract number. What makes for a great deal of disappointment and disillusionment is our inability to question our illusion of superiority. We compound that weakness with our cognitive inability to understand big numbers or to employ techniques like probability analysis, and critical analysis of measuring and testing.

We are locked into the cognitive prison cell of the Dunbar Number. 150. That is the number of people we can have a social relationship with. That number has remained constant over the time of our species. We are a small number species. We just haven’t faced up to the fact. There are a handful of people who get the big numbers. But teaching us is like instructing a chimp in playing poker. We can’t keep our cards straight or the cards played by those sitting around the table.

In terms of number comprehension, we’ve created advanced technology that is beyond our capacity to understand. We are constantly hitting the upper limit 150. You needed the brain for many things. Like most primates our social habits are based on mutual grooming in a band. Each one of our ancestors picked the fleas off others in those hard to get places. All of the evidence suggests that we are better flea pickers than stock pickers. We’ve hit a numbers wall. The problem is scaling. Number comprehension that worked perfectly well for flea pickers breaks down in a complex, interconnected world occupied by billions of their descendants.

This doesn’t mean that only highly competent mathematicians should be allowed to vote, make predictions, or form policy; what it does mean is that our modern world is slipping out of our comprehension. Artificially Intelligence (AI) ultimately (2050) will come into its own because nothing short of advance intelligence will be able to make sense of the numbers emerging from Big Data. AI promises to calculate without the Dunning-Kruger Effect. We will see about that.

Alternatively, we might never get to the AI intelligent machine stage. In places like the USA where a new congress is riddled with anti-science, innumerate representatives, we may be witnessing a return to a culture where the highest value is placed on the ability to pick the fleas off a neighbor, who keeps count and returns the favor. But with those billions of Chinese and Indians that may prove to be a lot of fleas to keep track of.