Losing Your Breakfast/Losing your Privacy: A story of one man’s loss in Bangkok

I have a confession to make. I’ve been secretly dismissive of timeline photos and stories people post about food. If I really come clean, I’d say that my bias against such foodie photo/opinions/revelations has created an unearned sense of superiority. You’d never find me posting a photo of food, I tell myself. Until one Tuesday evening in November in Bangkok, that is. Here is my food story with accompanying documentary evidence, which appears required if you are going to tell a food story. In any event, while chance sent me free food, I am paying a large price in now admitting myself into the circle of those who post stories about food.

I boarded the MRT from Sukhumvit Station around 9.45 p.m. Tuesday night, 18 November 2014 (details are important for the archive). I was on the last escalator leading to the train platform. I had noticed a farang immersed in a cellphone conversation and taking his time. I rushed past him sensing that the train might be there (most of the time I am wrong about that), running down the escalator to find the train waiting, doors open. I ran and slipped inside. About four steps behind was the guy who’d been on his cellphone. The doors were closing. It’s like one of those horror movies. The inevitable closing on someone’s hand and foot. He struck his hand in the door for leverage and his foot, too. Both were wedged in the door of the train as it was closing. But the MRT doors are unforgiving. He struggled but managed to remove his foot. 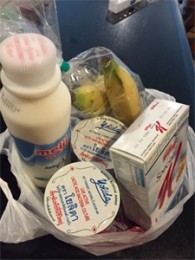 At the same time before he floated away into nothingness, he left us a legacy of his existence: a plastic bag with bananas (2), yogurt (2) small milk (1), and a small box of Special K* cereal. This legacy (pictured above) managed to squeeze through the inner door. It was a battle he realized he was going to lose. He shook his hand free of the door. We locked eyes in that very moment. I felt I was watching a rough cut of George Clooney suited up in Gravity as he pushed away from the space ship. Peter, like George, had performed his part of the drama and now nothing was left but to push him into another time dimension outside of our vision. Let’s not get too overly dramatic, though. Unlike George Clooney, Peter had time to contemplate an alternative Plan B: either go back and buy the breakfast for a second time or call it a night and wait five minutes until the next train arrived.

From the contents of the plastic I concluded he’d not only lost his Wednesday breakfast, but there was someone waiting at home who had relied on Peter to bring breakfast home for him or her. I imagined a deep sense of disappointment descending on Peter’s household as he arrived empty handed, and offering up an original retelling of the “dog ate my homework” story.

As the figure of Peter trying to bravely smile as we saw him get smaller and smaller as the train gathered speed, all the Thais turned around in their seats. They were highly entertained by the farang missing the train but were at the same time slightly confused that his groceries had made it inside; well, almost inside, they were hanging, suspended chest high in the door. It was like a magic act. No one could take their eyes off the bag stuck in the door. Their brains were turning over, trying to process exactly what had happened.

I stood near the door, guarding the bag, wondering what I should do? I had one stop before I got off to walk home and not much time to make a decision. When the doors open, do I give the bag to who looks to be the poorest person in the car? It occurred to me that with the exception of my wife, I’ve never met a Thai who wouldn’t confess to a murder wrap before they’d eat something labeled: “Live Active Lactic Acid Bacteria Culture.” Beside the aversion to the yoghurt, the milk and banana would be of interest. But would giving it to one rather than another cause envy, may be a fight? I didn’t see any gardening tools so none of the passengers looked all that dangerous. But I decided, none of them looked hungry. Or poor. Then I thought, do I give to the motorcycle taxi guys outside my condo? No matter how many possibilities I couldn’t get over the Lactic Acid Bacteria problem I’d encounter. But it seemed an ethical violation to keep the food as spoils of a war left behind by a farang casualty in a battle with an MRT car door.

What would Calvino do? Or Mrs. Calvino (this is not a spoiler, only a possible long distance possibility in the deep future when Calvino, like Peter, leaves his food stuck in the door one too many times and decides it’s time to settle down with a woman who will see that he’s properly fed)? As it turns out, my wife was the one who fished out of the plastic bag a KBank receipts. One receipt had his name; his first name is Peter. I won’t embarrass him by spelling out his last name. If you know a Peter who banks at KBank who is his missing breakfast, let him know that I have it. It’s chilling in the fridge. He can pick it up anytime.

I had wanted to write about privacy and how that idea is dead. We are like one of those sad chimp mothers who continues to cradle the dead baby against her chest refusing to give into the reality of the situation. The two receipts Peter slipped into the shopping bag gave me a chill. There was not only his full name on the credit card receipt. There was also an ATM receipt showing a sizeable bank balance. How would he know the food would depart on a train without him? How would he sleep knowing someone on that train not only had his breakfast but his name, the branch of his bank and the amount of money he had on deposit.

This is a glimpse of how modern life has swallowed your privacy and spit it out on receipts. I am forever finding one in a pocket. I held a stranger’s two receipts in my hand. I don’t know him. But I now know a great deal about him. More than most people would be comfortable in confiding with a stranger. The ATM receipt was the equivalent of a privacy death certificate.

It couldn’t be more clear. Peter has no privacy, neither do I, and neither do you. Whether it is your Bank, credit card company, or any company you do business with, they can encode all or part of your personal information they’ve collected and they can sell, license, give, trade it, print it and distribute it, and profit from it. We’ve all lost much more than our breakfast. We’ve lost the right to put a receipt in a bag and lose it. The contents of Peter’s bag from the supermarket broadcast to the finder his private dietary choices and the financial details of his life. I feel I know a lot about Peter. In the future, we won’t have to lose our shopping bag to be in Peter’s situation.

Strangers are reading your life in the data you leave behind, the searches you make online, your emails, the articles and essays you read, and you are tracked in a hundred different ways. Google is a leading privacy slayer. I will leave you to contemplate two seemingly contradictory conclusions: We, our health, finances, politics, reading choices, desires, prejudices will never be lost to those who have access to the tools that allow for an audit. And secondly, We’ve all missed the train, leaving our identity stuck in a bag in the closed door. Take a long look. Peter’s you and he’s me.

*The keen eyed reader will have spotted the Special K box of cereal was sold past its expiry date.