Where the Wild Things Are: Bangkok

. Wild things like in wild, feral animals are a good place to begin a Conrad-like journey into the heart of urban darkness. 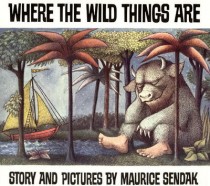 Noah, according the myth, collected a pair of each animal and loaded them onto an arc as he had advanced warning that a flood would wipe out life on the planet. This week a modern version of Noah was busted in Bangkok, although no arc was found on the premises. But that is a minor detail, as no self-respecting face displaying local would be caught dead shoving animals into a wooden Arc. The new Arc is an imported luxury cars.

Before we move on to the animal selection process for filling up an Arc, let’s start with the noise animals make. Noah must have had neighbors, too. We never heard their side of the story. Noah didn’t work in silence. He banged nails day and night to construct the arc, while his animals caged up kicked up a chorus. Never heard that part of the story? Right. That merely proves that some great background stories never are told, or if told, are remembered and passed down from generation to generation.

In Bangkok, after a drinking session the music is usually turned up … and up … and at some point it blares through of the neighbor’s walls. The racket Leeches through the floors and ceiling and sucks you dry. Welcome to the neighbor from hell. The one with the teenagers who has formed a rock band with his buddies but no one has ever taken a music lesson.  The wannabe rock stars bang away on electric guitars and drums from midnight to four in the morning. You complain to the police. They do nothing. As Thailand is a hub of the unconventional story about hellish neighbors, at last there is a story where the police actually came, saw, held their noses, and returned with very large trucks to remove the source of the noise. Only in this case, it wasn’t loud music that caused the misery. 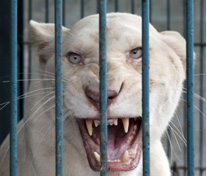 In one of the remote neighborhoods in Bangkok, Khun Lek bolted up in bed as he tries to awake for a nightmare of roaring lions and a distant tingling of pigs and peacocks. You are awake but the sound of jungle hasn’t disappeared. And then he smelled something foul as if a hundred sewers have backed up and overflowed in your bedroom.

The police discovered the neighbor—a Mr. Montri runs a pet shop at the Weekend Market also known as Jattujak or JJ Market. He’d previously been convicted of trading in wildlife and had gone back to his old ways as officials found: 14 white lions, 4 otter civets, 2 hornbills, 1 oris, 23 meerkats, 1,000 sugar gliders, 12 peacocks, 13 turtles, 6 minks, 4 miniature pigs, 17 marmosets, a number of birds, and some stuffed animals. It seems the police got tired of counting after the exhaustion of counting 17 marmosets (those little buggers race around like rats on speed and all look alike making counting an ordeal) as quantities grow vague when it comes to birds and stuffed animals. There it is. After the great flood, the world starts over with this population of animals.

Mr. Montri told the police that he had the paperwork to legally import the lions from South Africa. Apparently a lion cost Baht 200,000 wholesale or about $6,700.00. There was a slight problem with the papers. The import documentation showed 16 lions coming into Bangkok, and there were only 14 in the cages on Mr. Montri’s land. The paperwork hasn’t stopped the police from charging Mr. Montri with offenses that could delay the sailing of the Mr. Montri’s Arc by up to 4 years.

Where were the missing 2 lions? That question is one Mr. Montri’s neighbors are seeking answers to as they gingerly rush from their front doors, climb into their cars or on to the seat of their motorcycles and get out while the getting is good.

The rich in Thailand apparently have a strong desire to own unusual pets. There is also a dark side, too, as the delicate bits from some of these animals are also made into medicines usually to increase the vitality and virility of aging men.

The secret sex lives of some old men include harvesting organs from rare, large African animals. Others go for luxury sports cars.

This leads us back to the on-going investigation by a large number of agencies into the smuggling of luxury cars into Thailand. The 300% import taxes are staggeringly high for someone using the normal import channels. That provides an opportunity for someone who can figure out a short cut. Somehow 2,000 luxury cars were smuggled into Laem Chabang port in Chon Buri and stored, making it one of the world’s largest luxury car parking lots in the world. As one would expect, cars began disappearing from the port as importers began selling them off at bargain prices.

The Department of Special Investigation (DSI) is looking into 600 luxury cars to see if they were legally imported. DSI has impounded a 100 luxury cars so far this year.

News reports indicate 90% of the luxury cars imported into Thailand came in illegally. That is more than just a little leakage in the system. That’s the sound of Niagara Falls roaring next to those missing lions. Like prohibition of alcohol, criminalization of drugs, or 300% taxes on for a luxury item is guaranteed to fuel a grey and black market, corrupt officials and create a wealthy criminal class of middlemen. In the case of Thailand, the grey and black markets are the lion’s share of the luxury car market. The grey market includes luxury cars used abroad by students and imported into Thailand—just think about it. You come home from year of study abroad with a half-million car that slides under the tax regulations. Or if you have a luxury car assembled in Thailand, another free pass. Though the assembly of such cars require technicians and facilities that rival NASA, and the local ‘assembly’ shops appear to have no more than the usual screwdriver and hammer. And the luxury car has to be registered. Basically the luxury car market is a legal mess with many fingers pointing and many more fingers in the pot.

The owners of luxury cars are a who’s who of Hi-So personalities, senior government officials and even an abbot. Their sons and daughters also have a taste for the exotic import that distinguishes them from the lower orders running around town in their government subsidized locally assembled cars that cost less than the upholstery on a Bentley.

You need vitality to drive one of these babies. With a white lion in the passenger’s seat no one, I repeat no one, is going to have a larger face than the man behind the wheel. Most people are status obsessed and the Thais are no exception to the rule. Face is important. What you drive, wear, and the animals you collect, if of the right sort, can create a face the size of the moon. Capitalism in its full glory has provided a mechanism to achieve the elevated heights undreamed up in Noah’s day of mere arc builders.

If we stand aside from the personalities and the distracting images, we can see more clearly what is at stake. The lions and the luxury cars are really a story about our uneasy, troubled relationship with nature and each other. Our problem has caused a problem with nature once it became apparent that there is vastly more profit in destruction than in maintenance of natural resources.

We are a species of Deceptive Apes, Killer Apes, and we are a danger to ourselves and all other species. Our ancestors passed laws and wrote constitutions to protect us against ourselves. In the digital age we have found those in power have discovered new and powerful ways of deception, means far beyond the imagination of prior generations.

We deceive ourselves into believing that the rule of law will continue to protect us like a dyke against the rising tide of government intrusion. Apathy is the bedfellow of deception. We are enablers of the worst excesses that should worry us but don’t. A majority of Thais accept corruption as part of the system. A majority of Americans don’t object if their government accesses, stores and analyzes their emails, Amazon purchases, Google searches, Facebook likes and posts, and telephone calls.

Collectively we’ve fallen into a state of denial that a price is paid for deception, and we are the one’s who pay it. Our minds fill with the soma of the media and the government officials, and we miss the context and the larger issues. Like a great magician, who knows how to distract his audience, we are easily fooled. We focus our attention on the slightly amusing personal stories that limit the damage to a couple of dodgy schemes that the authorities are investigating. Imported lions and luxury vehicles are a good laugh. Until we realize that we are laughing when we should be weeping.

We live in a time of great loss—nature, privacy, freedom, honesty and fairness. One by one, these values are dying. Like Old English words, one day no one will remember what such words meant back in our day. The natural habitat of the Deceptive Ape is in transition. What that new space will look like? Perhaps our descendants will occupy a mental cage with as much space to roam as the cages that the Bangkok resident white lions were housed.

We can only guess. Where the Wild Things Are is just beginning to unfold.

Neues von C.G.Moore auf Deutsch: „Reunion“
Christopher’s latest Vincent Calvino novel, 13th in the series, is titled Missing in Rangoon and is available as an ebook on Kindle.