Some weeks provide an avalanche of events—enough to fill a book of essays. For example, a German national who’d finished serving a prison sentence in Australia for theft and drug law violations, escaped his private security guards at the Bangkok airport and had a two-day holiday in Bangkok before the police caught up with him. Carlo Konstantin Kohl, a German national, with an Australian accent aged 25 (a contemporary of Mr. I Am Awesome, the 25-year-old Thai drug dealer with five wives I wrote about a couple of weeks ago) was being extradited to Germany. Here’s an account in the Australian:

Kohl’s escorts were two private security personnel whose job was delayed at Suvarnabhumi Airport due to bad weather. The security detail had decided to wait for the onward flight to Germany in the transit lounge with Mr. Kohl. It was a long overnight wait and the guards fell asleep according to the Bangkok Post  (although the Australians denied that). Mr. Kohl decided he wasn’t all that anxious to return to Germany where he was wanted on parole violation charges. According to local reports he wandered around the airport for hours. 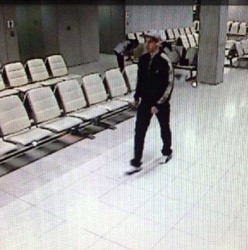 Mr. Kohl on his way to a foot massage in Suvannabhumi Airport in Bangkok.

His escape from the airport confirmed that it has more exit doors than Bangkok’s illegal gambling casinos—300 doors—and is far less secure. Any one of the airport exit door, apparently, is easily disabled by snipping an electric wire.

Rumours are unconfirmed that Immigration—having discovered all of these doors may be in surplus for emergency use—might convert a half dozen of these surplus exits into Fast Track lanes for those willing to pay an extra fee. Of course, I made that up, but anything your can conceive in your imagination just might have a counterpart in reality in Thailand.

Thais love stories about handsome young rogue farang giving the authorities in Australia and Thailand a dual set of black eyes. He was bound to endear himself to a Thai audience by stopping at the airport for a foot massage before high tailing it to Soi Cowboy. The local press played the sanuk angle of the story as if Mr. Kohl’s tour of Bangkok’s hot spots was a blend of Home Alone and Hangover II. A handsome young rogue for a star, fumbling, sleeping Australians, and a tour of the hot spots of Bangkok.

Establishing the facts has been illusive. Like objects in zero gravity, facts in Thailand have a habit of floating free, bouncing off the shell of reality, untethered they remain fluid and forever just out of reach. The Thais have a way of dealing with facts that appear to incriminate someone important—those facts fall into the category of insufficient evidence. In Kohl’s case no Thai officials of rank were incriminated (that was news in itself). His romp through Bangkok was an adventure, and besides everyone was quite happy to lay the blame the Australian security detail—including the Australians. Falling asleep on the job? That could never happen in Thailand. What about all of those doors Mr. Kohl rattled? Some of the doors had been kept open for the convenience of airport staff. A bolt hole might be useful when the time comes to sneak a cigarette, hide from the boss, or to find a cozy spot for a quick nap.

Even the circumstances of Kohl’s capture/surrender/ambush—take your pick—are unclear. He was arrested in the vicinity of the German Embassy (the exact circumstances of his apprehension like most other aspects of the story are vague). One press report said Kohl had applied for a replacement passport two weeks earlier. That was the first clue that he’d been enjoying himself in Bangkok for some while. And he’d been flying under the radar.

Hadn’t anyone notified the Germany Embassy in Bangkok to be on the outlook for him? Apparently not, but facts like elementary particles in physics apparently only allow you to measure location or velocity. I’d hazard a guess that Heisenberg’s head would have been spinning to explain the facts in this case. Was Kohl on his way to the German Embassy to pick up his replacement passport? Did he suddenly have a pang of guilt and walked up and turned himself in to a Thai cop he saw on the way to the embassy? We don’t know those facts. You can’t find them anywhere in the press accounts.

In one week, Carlo Konstantin Kohl managed more front page coverage in the English language newspapers than the Prime Minister or her brother—the one who was prime minister when the airport with the 300 exit doors was opened, and the one through which he exited some years ago. This was exactly the kind of story the local media love—a Hollywood bankable rogue, keystone private cop foreigners, and no one of importance had been accused of corruption, thuggish behavior, or displays of gross arrogance. Allegations of negligence, well, to complain about that is to complain about the oxygen we breath. Though the Thai press had a report that the taxi driver that drove Kohl from the airport into Bangkok charged him Baht 3,000 for a ride that normally would cost under Baht 300.  It’s not certain Kohl was aware that he’d been grossly overcharged. I suspect his gave the driver a hundred dollar bill. Unless after his foot massage Kohl made a trip to one of the airport exchange booths.

With a bit of time to reflect, the Bangkok Post ran editorial suggesting that if Kohl could use a coin to open a security door at the airport, well-trained terrorists who’d been trained with escape and evasion skills could easily have popped open all 300 doors at once.

Kohl, who was fined Baht 6,000 ($200) and given a two-year suspended sentence for illegal entry, later conducted what appeared to be a workshop in front of about 50 officials who watched Kohl show how he had used a coin to open a security door and how he cut the wire. It was less a reenactment of the crime than the usual photo op the local papers run of a foreign guest speaker, guru from abroad, holding one of those seminars at a five-star hotel, lunch included, for the professional development and the transfer of foreign know-how and technology. 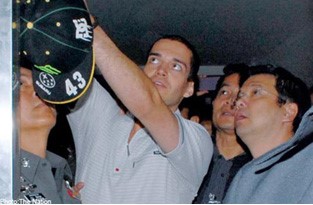 Kohl’s fun holiday in Bangkok overlooks one or two issues that I’ve not seen raised in the press accounts. Shouldn’t someone be asking the question as to whether there are protocols that require foreign police agencies, or private security firms used by law enforcement to transport prisoners to other countries, to notify local authorities that a criminal will be passing through as a transit passenger? Wouldn’t the Thais like to know in advance of arrival of someone like Mr. Kohl at their airport? Would they have rules to be observed such as don’t fall asleep in the transit lounge while escorting a prisoner? Can any serial killer show up in the custody of a couple of sleep deprived private security guards, take a power nap in the transit lounge, and let their charge take a tour of the city? What other people or things are going on in transit lounges that Thai officials might be interested in as a matter of public security and safety?

Or is this the international transport of prisoners one of those black boxes, like the renditions the Americans ran out of Thailand for some years, where flights come and go out of shadowy world with a wink and a nod? Do other countries have procedures that set out what notices and process must be complied with in flying prisoners in and out of their country?

The problem with such questions is they take the fun out of Kohl’s story. Better to keep a lid on the broader implications of what happened by limiting attention to the official response which is to send a crew around to rattle the 300 security doors at the airport. The questions are also embarrassing to both the Australians and the Thais. By asking why the Thai authorities didn’t receive advance notice of Mr. Kohl’s arrival raises the uncomfortable possibility that the Australians were under no obligation to give the Thais any such notice.

Credit must go to Mr. Kohl was exposing the security problem at the airport. Additional credit is due for establishing the abiding metaphor whenever an influential person is facing a ‘fact’ that causes a major loss of face and serious criminal charge—he will find 300 exit doors, and one of those door will allow him to escape. Call it the ‘insufficient evidence’ door. 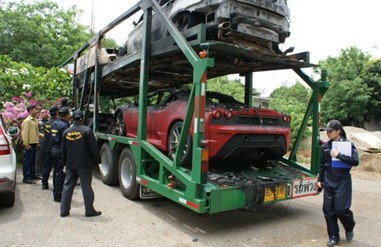 The more interesting story this week was the explosion and fire that destroyed a carrier lorry loaded with six foreign luxury cars that somehow had entered the country and avoided import duties, and the parties have links to major politicians and government officials.

The six luxury cars have caused a turf battle between the police, customs, revenue department, and the anti-corruption agency—that no doubt other agencies will seek to have the cars and jurisdiction under their authority. Doors. 300 doors, and the question is which doors will open and close before the mystery of who owned and imported the six luxury cars. Next week, reading the local press will be an exercise in observing multiple doors opening and slamming shut like a nineteenth century prison cell. Could the Australians take the fall for those luxury cars? Did someone fall asleep again? Somewhere, official wheels are turning, door knobs to power tested.

Neues von C.G.Moore auf Deutsch: „Reunion“
Christopher’s latest Vincent Calvino novel, 13th in the series, is titled Missing in Rangoon and is available as an ebook on Kindle.