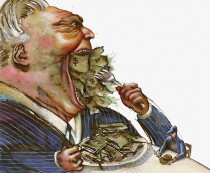 We Need To Have a Talk About Greed

The impulse motivating a lot of crime is greed. The outlier wants money for drugs, hot cars or motorcycles, beautiful women, expensive restaurants, foreign holidays—what are perceived as the good things that rich people, or at least well off people, use to identify themselves as successful, desirable, and admirable. Not to mention more sexually attractive. The determinist would argue our biology compels us to compete for mates and nature has no morality, only meaningful report card is the column marked reproduction success, so cheating and the rest of the card are worthless. In love and war there are no rules. Anything goes.

Many articles and books have hammered home the lesson that most acts of greed aren’t criminalized. In many cases, not only are such acts legal, the greedy are rewarded with large bonus, awards, put on the cover of magazines, appear on panels at Davos. When a huge company or firm threatens to blow up from an excess of greed, they turn to the government to safe them.

That’s why we need to talk about greed. We live in a time of vast inequality, a state that is defended by a sizeable portion of the population who happen to be the victims of such inequality. How did this happen? Have we been sleep walking for the last thirty years since President Ronald Reagan and Prime Minister Margret Thatcher fired their starters’ pistol that allowed the greedy to spring ahead of us at the speed of light. All of this has happened in our lifetime.

How bad is it? What can we do about it? And how did hive create a unified mindset that greed was good? I don’t begin to have the answers to such complex questions.

What I have are a couple of pathways to explore, and one or two signposts that suggests a direction to move ahead.

Our perception of greed including the qualities that fuel greed—selfish and narcissistic attitudes and an absence of empathy begins to take shape in childhood.

Most of us remember when as a child, a brother or sister, friend or neighbor, hogged more share of the popcorn or mom’s apple pie or the bicycle or the basketball never passing, always taking the shot from the corner. That was our childhood introduction to the idea of greed–actions that were tiny lessons in the art of selfishness. From an early age we calculate how other people divide and share time, opportunity, attention, and, of course, money. And one shouldn’t forget toys and invitations. My parents lectured me that being greedy was morally wrong and people wouldn’t like me if I were greedy. Of course you can be disliked for a lot of other reasons even if you’re not greedy. But that is another essay.

One would think with a lifelong series of lessons in the workings of greed in the back of our minds, we’d quietly resolve that once we grew up and ran things, we’d put a fence around greed, herd the greedy inside and watch them roam around being greedy among their own kind. An appropriate punishment is isolating the greedy.

The problem is, after we grew up the people who were greedy all around the edge of our life proved to have the kind of talent and ability most valued by the world of commerce. And there was no need to isolate the greedy, as they were perfectly capable to isolating themselves. Who else lived in gated communities?

As far as I can see, greed is a vast mall where pundits are gathering to talk about fair shares of this and that on a daily basis. Two recent stories made me understand that the lessons of greed learnt during childhood never fully prepared us with the way forces much larger than ourselves have scaled greed to unimaginable levels.

The first story about loan sharks or what the Bangkok Post called  “predatory lending cartels.” There are about 40 to 50 of these backdoor banking operations in Thailand. Apparently, two of the “businesses” have resources and what the Bangkok Post calls “backing to counter the authorities.” You get the picture—no one can do much about the ‘backed up’ greedy. They have juice.

The way it works in Thailand, is the borrower can opt for a 24-day repayment period or a “2% interest” payment plan. Under the first plan, the borrower repays an equal amount every day for 24 days. The average interest on the 24-day repayment plan is 50%. Under the Usury Law, the maximum is 28%, but as we have established if you have juice, you can squeeze out another 22% over the legal limit without too much of a problem. But the 24-day plan is a walk in the park compared with the 2% interest plan. Under that plan, the borrower is paying only the interest, and that continues until the day the borrower comes up with the principal to repay. Can’t come up with the principal, the borrower continues to pay for life.

Greedy lenders couldn’t exist without an element of greed in a large pool of borrower, especially ones who won’t ever receive a bank loan because they have no steady income or resources to put up as collateral. But they also want to buy gold, cell phones, iPads, and motorcycles. This class of upcountry lenders has an army of “black helmet” debt collectors who do nasty things to borrowers who miss payments. The handmaiden of greed has always been violence. When a borrower takes the money from one of these lenders, he/she forfeits his protection against intimidation and violence.

The upcountry Thai loan sharks show how greed can be organized and scaled on a regional and national basis, and how, at least some players in that network, are given a free-hand to violate the Usury Law and the criminal statues on threatens, intimidation and assault. The middle-class tends to write off the poor rural borrower, as someone reaping their bad karma.

The second story shows that Thailand’s loan shark operation is small change, backwater, out-of-date, out-of-touch money-making. When someone has a close look at the assets of the global super rich, we start to see the upper limits to which pure greed when left unregulated by government, and unbundled from any sense of ethics or morality, can take us. The Guardian  reports that 92,000 people or 0.001% of the world’s population has hidden out of tax view approximately $21 trillion dollars. That’s a lot of ice cream cones, basketball court time, and popcorn.

How much money is that? Three percent interest on that sum is equal, according to the Guardian, to the combined aid given by rich countries to the developing countries each year.

At one time it was said that money from the rich trickled down and everyone benefited. This hunk of an iceberg sits out of sight and despite global warming shows not only no sign of melting but no evidence of a trickle from a leaky kitchen tap.

A number of recent studies in psychology have shown that people have a burning sense of fairness. If A holds $100 dollars and the rule is she can keep the money provided B agrees, and before B agrees, A must make an offered division of the money. What the researchers found is that if A offered B $20 and wanted B to accept that offer so she could keep the $80, most of the time B would reject the offer even though B would be $20 worse off. The point is A loses the $80, too, and that makes for an incentive for a fairer offer, say a 60/40 split.

Our psychology drives people on a personal, person-to-person basis, to reject an offer meaning she will get nothing but at the same time knows the other person who made the unjust offer also gets nothing. Once we scale away from the personal level (the level we know from childhood) we discover at global level of big business and finance, that capitalism inevitably, without safeguards and restraints, will always produce an unjust allocation. In this case, there are several ways those who feel the allocation between the 92,000 and the rest of us is an unjust and unfair allocation of resources. It’s a gross misallocation of money.

Here are a few ideas: First, we have the necessary tools to find the money Second, tax laws could be passed to compel the 92,000 to pay taxes on such wealth. Third, enact an “unusually rich” law (there is such a law in Thailand, but that is another essay) which allows the government to claw back money someone can’t account for.

Saying you won a couple of billion in a poker game or a lottery has been tried (and mostly doesn’t work). It might be better to cut to the chase, and admit that anyone with wealth over $100 million is unusually wealthy. The excess money goes back to the State. The environment, climate change, education, medical care, scientific research would benefit overnight from this cash injection. Though, with the cunning of international banksters combined with this treasure scattered like rice thrown at a wedding, enacting such laws would be almost as difficult as enforcing them if enacted.

The anger over the unfairness of how income and wealth is distributed is coming to a head. Precisely because you can poke large holes in the possible three solutions above, the political solution seems impossible. When that happens, expect to see self-help fill the void.

It won’t be long before technology will allow determined Internet Robin Hoods to ferret out the super rich, their bank accounts, their hiding places inside the global Nottingham Forest. Once there is a consensus that the Sheriffs have been bought off, the risk increases that self-help will fill the void. The task is a huge one. The construction of a secure fence to encircle greed might be technically possible but with the amount of wealth involved, the super rich will have their army of  “geeks” to subvert the Robin Hood assault.

Only a true romantic would believe that our childhood promise to install a means to control greed can succeed. No matter where on the planet the money is stashed, it can be shifted, converted, hidden and more accumulated in the meantime. Will there be an accounting of the super rich? That’s already been done. But accounting and accountability are two separate issues.

The digital auditors need backing. They can run the sums. They’ve identified the world’s elite class of the greediest. It is now over to those who have their hands on the levers of power to adjust the rules and tax laws. The way it looks, though, they are holding hands with the super rich. The levers of power are part of their hidden ownership.

It would be too depressing to leave the matter like a crime everyone witnessed but no one can arrest the killer. In the oft chance, the internet Robin Hoods need some analogue help in chasing down the super rich, or some technical advice on what do to with them when they’re found and confronted, they might consider a consultancy contract with the Black Helmet debtor collectors in Thailand. The Men in Black Helmets know how to produce results. The 92,000 might try to bargain, bribe or come up with excuses. These guys, according to press accounts, are good; they no how to cause pain without leaving marks. But the bribing potential is a bit of a problem but giving them a percentage of the take should take care of that.

For anyone on the 92,000 Greed List, you better start running about now, looking over your shoulder, because I see a crew of 53 kilo Black Helmet debtor collectors recruited as freelance taxmen and they have your name and address, bank account details, and the message from Thailand is that these guys just don’t accept  “no” for an answer.