Crime Fiction: How we write about violence

No one opens a crime novel unless they are looking to dance with violence. Murder, assault, and rape are on the dance card. The larger question is whether crime fiction authors understand the nature of violence and accurately write about how violence occurs in reality, or how to protect oneself against an act of violence. Crime fiction authors also by the very act of writing novels about crime are making statements about the prevalence of violence in society, how society protects itself against violent offenders, and how we can defend ourselves when the target of violence.

Steven Pinker’s The Better Side of Angels is a chronicle on how we’ve tangoed with violence over deep time. Part of Pinker’s thesis supported by a lot of historical data, is that the past was a far more dangerous, violent place. The chances of being murdered 700 years ago were around 50 times greater than it is today. One statistic that stands out in the review of the long period of peace from 1950 to the present (no Great Powers have gone to war against each other) is that during this period there were two wars involving the Americans. The Korean War with losses around 38,000 killed and Vietnam with over 58,000 killed. Even if the numbers of those killed in these two wars were added to the numbers of the “smaller” war in Iraq and elsewhere, the absolute number still pales in comparison with the number of murders in the United States over that same time frame: 1,000,000 murders.

And still we are far safer than our ancient ancestors were in meeting a violent death.

People are far more mindful of security today. They are more concerned about violent deaths. We tend to believe that the ‘present’ is the way things always have been. That is demonstratively false. The obsession about crime has created, at least in the United States, a massive prison system with over two million people locked up. Most of them haven’t committed a violent crime.

In this state of anxiety over personal safety, our inflated sense of risk demands that we not just rely on the police to protect us against violence but that we are prepared to defend ourselves. This brings up the discussion of guns. There is a sense that being armed to defend oneself is a natural and normal response to violence. Others would argue that a ‘gun’ isn’t the best defense. Violent people are the product of a defective self-control mechanism. They can’t handle anger. Push the wrong button on such a person and a violent reaction is often the automatic response.

Then what is the best way to defend oneself confronted with a person who may use violence? Prevent the escalation of violence is the simple answer. As one writer on violence puts it, distinguish between fear management and danger management.

Violence falls into a couple of categories. A violent confrontation with someone you know, or a confrontation with a stranger. The vast majority of violence falls in the first category. The perpetrator and the victim know each other. In the second case, violence emerges through a different dynamic. If it is a robbery, the robber doesn’t have anything personal against you. He only wants your money or other valuables. You might do something to make him react violently but that isn’t the intention going into the robbery.

Sam Harris in an Essay titled “Truth About Violence”  has made a case that the best defense is to understand the psychology of what fuels it. A great deal of violence is committed by young males. Violence is part of the status seeking and retaining mission which defines the person’s worth to other young males. Violence is also part domination ritual, where the stronger seek to exert power over the weaker, less brave and able. Historically violence was used in conquest, taking land, treasure and resources from others. One of the most effective ways to abort an act of violence is for the ‘potential victim’ to not challenge the person making the insult, intentionally bumping into you, glaring at you across the room. The advice: don’t react, just move on.

We are hardwired to react emotionally at just the time when we should be the most cool hearted. In those seconds when our ape brain urges us to return the insult, the shove, the glare, we should be moving out of range. If you think that is cowardly, then you’re wrong. Standing your ground and allowing escalation is never self-defense. It is a fight. And the chances are you will get hurt, or hurt the other guy and end up going to jail. Anyone who has been in a fight will tell you they were defending themselves. Prisons are filled with people who lost that argument. They weren’t defending their physical person from an actual attack, they were seeking to redeem their ‘honor.’ And honor redemption will put you in jail or hospital. Either way, whatever honor you’ve redeemed won’t fix the overall loss that you are likely to suffer.

First rule: stay away from dangerous people and the places those kinds of people gather. Dark alleys at 3.00 a.m. Neighborhoods infested with bikers and street gangs. If you avoid these people and the places they go, you greatly reduce your exposure. Walking on the wild side is fun until it’s not. If you are in a fun zone and you are confronted by a violent person, never add fuel to an angry, potentially violent person’s fire. Turn and walk away. Remember if you trace your ancestors back to the beginning, most of them followed that course of action. You can be sure of it. Otherwise, you wouldn’t be reading this blog. You wouldn’t be here because some hot head in your lineage decided fighting for family honor was of greater value than escaping. Light a candle for the escapers in your lineage tonight. You owe them your life.

Second rule from Sam Harris don’t ever value property to the point you are willing to risk your life to defend it or take the life of someone seeking to take or destroy it. When a teenager snatches your cell phone or your new MacBook Pro, let it go. If you are packing a gun, are you going to draw down and shoot him in the back as he’s running away? Not a good idea. Let it go.

Lastly, Sam Harris considers the situation where you’ve done everything you can to avoid the confrontation, but the person intent on committing violence against you is trying to gain control over you. Such a person may well hurt or kill you. Your best plan isn’t the fancy karate kick or pulling a gun, your best hope is to not give into the attempt to control you. If you give the mugger you wallet, turn and run. Chances are he won’t shoot you. He wanted the wallet. If he is going to shoot you in the back, he’d likely shoot you standing eye ball to eye ball and a running, moving target is harder to hit. And what’s he going to do with the body? 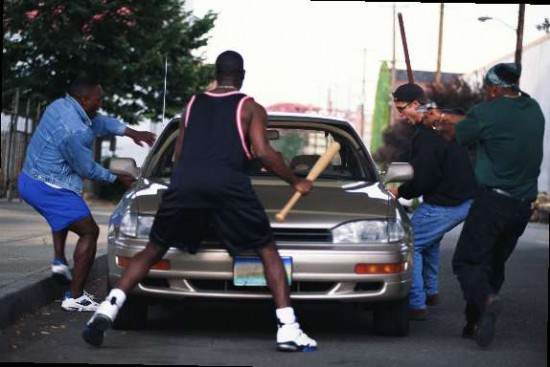 Hollywood and TV adds to the misinformation about dealing with violence. Ever notice in a film when someone gets shot, they drop like a rock, stone dead. In real life, you shoot someone and the chances are highly likely they will return fire within the next 90 seconds. If you are in the way of that fire, you’re going to be as dead as them. Only a few seconds later. But you’ve read about the martial arts program that will allow you to defend yourself against the violent thug. Unless you’re going to Navy Seal training, what you will learn may give you a sense of protection and it will also likely get you killed. The dangerous illusion is a gun, a knife or martial arts works immediately. It doesn’t stop the violent person from inflicting death or injury on you.

The recommendation of the experts is you need to remain cool under the threat, find a way to break out of your situation and that may require one of a handful of physical plays that are intended to give you a window of time to escape. Not to hurt or kill the other person but to create enough problems and confusion for him that opens an escape hatch for you to leave the scene.