Five books have been short-listed for consideration for the Foundation’s first year award. A summary of the books by the Chairperson of the judging panel is supported by all of the judges. 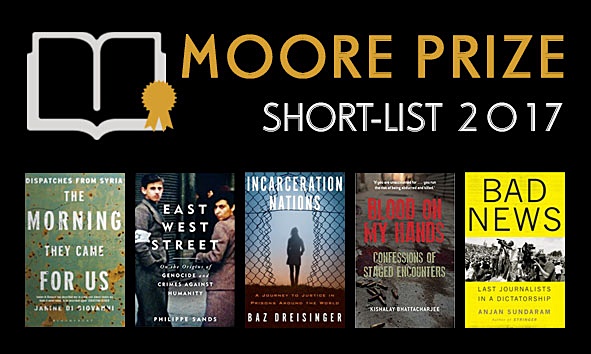 The Morning the Came for Us: Dispatches from Syria

In May 2012, di Giovanni, the author, went back to Syria to see for herself what was beginning to unfold there. The result is a brave and shocking account of some of the atrocities, which occurred at the beginning of the Syrian conflict. The Morning They Came for Us, through its ‘unflinching account of a nation on the brink of disintegration’, is a vital testament to an ongoing conflict.

East West Street: On the Origins of Genocide and Crimes against Humanity

Philippe Sands skillfully interviews his own journey into the past in search of his roots, with the account of two remarkable men who, separately from each other, developed world-changing legal concepts derived from the hitherto unimaginable atrocities of Hitler’s Third Reich.

Both men without meeting each other studied at the same university in Lviv which in the 20th century has been sometimes Polish, and sometimes Russian. The book then moves back and forth across Europe and back and forth in time. The juxtaposition of Sands’ personal quest and that of the two lawyers, one, Hersch Lauterpacht, who became part of the British establishment, the other, Rafael Lemkin, who remained an outsider is masterly.

Incarceration Nations: A Journey to Justice in Prisons Around the World

The author, Baz Dreisinger, a professor, journalist and founder of the Prison-to-College-Pipeline, took a sabbatical leave to travel across the world from Africa to Asia and Europe, visiting prisons and talking with the inmates, examining their hopes for the future. One of the countries she visited was Thailand and her description of her visit to a model prison there was illuminating. As an American, she is constantly aware of how America has exported the harshest type of incarceration to the rest of the world.

Blood on My Hands: Confessions of Staged Encounters

In this chilling account, an army officer, who remains anonymous, explains to Kishalay Bhattacharjee in a number of conversations how promotions and citations in the northeast border area of India and Bhutan are linked to obtaining a body count of so-called ‘insurgents’. Without the requisite number of bodies there is no promotion. The easiest victims are those seeking to escape a difficult life at home by crossing the border illegally; they will not be missed.  Thus traffickers and army officers collude in an horrific business of planned murders.

Bad News is a very well written and gripping book exposing the dangers that journalists face in trying to report news in a dictatorship. It shows how a climate of fear can gradually permeate everyone’s lives, destroying any attempts to tell the truth.

Setting up a class to encourage local journalists, Sundaram describes how all his students end up being crushed by the system, either by giving in and writing pro-government propaganda or refusing and ending up in prison.

The writer travels outside the capital, at great risk to himself, to discover scenes of devastation, huts with their roofs removed because they were considered primitive, children sick and old people untreated for malaria.

The winner for the 2017 Moore Prize for Non-Fiction Literature will be announced on September 30, 2017 in London.

The winner of the Prize receives £1,000, and an engraved plague.

The Moore Prize was established to encourage original, creative, and courageous writing of fiction and non-fiction about the relationship of power to the lives of ordinary citizens in all parts of the globe; and to encourage authors to investigate and analyze the causes of conflict, abuse and violation of human rights.

R. Narisa Chakrabongse is the founder and CEO of River Books and founder/director Bangkok Edge Ideas Festival. She has co-written several books on Thai history and is the founding president of the Green World Foundation, promoting awareness of environmental issues in schools. She has acted as the Chairperson of the panel of judges.

Dr. Ma Thida is a Burmese author, surgeon and former political prisoner. Her notable published works include The Sunflower, The Roadmap and Sanchaung, Insein, Harvard. She is the recipient of the Reebok Human Rights Award and the PEN/Barbara Goldsmith Freedom to Write Award. Dr. Ma was a fellow at Brown University and Harvard Universities. She is the president of PEN Myanmar.

Christopher G. Moore, a Canadian novelist and essayist, is founder of the Foundation. Moore is the author of the award-winning Vincent Calvino series and a number of literary novels and non-fiction books. His books have been translated into 13 languages.