It is not an unusual story in South Sudan. Francis tells me that when he was eight years old, the Sudan People’s Liberation Army (SPLA) abducted him together with many of his class-mates from school. An early morning ambush captured many young boys as they entered the school grounds, and within minutes they were trussed up in the back of a truck and driven back into the bush. There they were trained in the art of combat, given an AK47 and sent to the frontline as child-soldiers. Francis fought as a soldier from the age of eight until he turned fifteen. We are careful not to discuss how many people he killed in that time, but he says that he saw ‘a lot of action and many dead people.’

Then his commanding officer decided that he needed to return to his education. He took him to Uganda and put him into school. There he learned the fluent English that he now displays. However, he continued working for the SPLA, recruiting new soldiers from the refugee camps in Uganda. This earned him four months in prison in Kampala before he was pardoned.

Francis is now working and studying in Malakal, the dusty and baking provincial capital of the Upper Nile State in South Sudan. He is employed by the UNHCR as the ‘protection officer’ at the Malakal Transition Camp. Though the title suggests something military, he is in fact an unarmed civilian now, his AK47 relinquished in favour of paper and pen. From my discussion with him it appears that he is the de facto manager of the transition camp. The camp is on the furthest outskirts of the town, a vast expanse of dirt filled with lines of massive metal-walled warehouses. Inside these vast cavities people sleep, cook, eat and get on with the business of living. There are long open slits along the sides to let air through, but the temperature outside reaches well over 40 degrees every day, and with metal walls and roofs, and no ceilings, the containers heat up like furnaces. A deathly-ill elderly woman is lying on a piece of cardboard at the entrance to one of the women’s barracks. Inside adults and children are lying on metal beds with rope strung across the frame as a mattress. This is all that is provided for them: the ‘accommodation’ (as Francis terms it), a bed and, most importantly, access to drinkable water. These women have been here for three years. I look at the little children shyly watching me from behind the skirts of adults. ‘How many have been born here in the camp?’ The question evokes much mirth and discussion amongst the adults; the tally for the dormitory rises from three to five and then to eight as they recall some others. I gather from the discussion that they are counting survivors, hence the need for the animated debate.

I am confused. Three years? This is a temporary transit camp for refugees, I thought. Francis corrects me: these are ‘returnees’. The refugees are in a camp further north. In fact, I had tried to visit this refugee camp earlier in the day: it is a vast collection of small grass huts scattered across barren land, marked only by two zinc structures – toilets – standing isolated in the distance. The little I could see looked desperate, an abandoned community eking out its survival on the barest minimum. But I was stopped at a security point before entering. The official appeared more apprehensive than seemed appropriate, repeatedly demanding to know whether I had official permission to enter the area. He was joined by several others who repeated the same questions, viewing me with increased suspicion as I tried to motivate my right to enter. My answers evoked even greater disquiet: the combination of agitation and an AK47 is one best avoided and I relented, making my way instead to the transition camp, where my welcome was far warmer.

The refugee camp I had tried to enter, Francis explains, is for Ethiopians who have fled the war in their country. This transition camp on the other hand is for South Sudanese who are returning home. As with so much in this complicated country, the explanation is initially satisfying, but starts to unravel the more one explores it. Where have these people come from then? ‘Khartoum’ is the answer. Francis laughs as my face screws up in puzzlement. With great patience he explains to me: war raged in the south and hundreds of thousands of southerners fled to the north. ‘Khartoum’ is just a reference to what is now Sudan, the North. They settled throughout the north as best they could. Their children were born there, went to school there, learnt Arabic, became part of the North. They were never fully accepted and were regarded as second-class citizens by the government, but they nevertheless made a life for themselves. Then, decades later, the referendum was held and the south chose to secede from the north and form the world’s youngest country, South Sudan, now only two years old. Khartoum’s attitude immediately changed: anyone who appeared to be a southerner (mainly by their skin colour, but also by their Arabic dialect) must return to their ‘new country’. It is spiteful discriminatory drive by a purist Arab-Islamic government to push all ‘African’ Sudanese out of the country and ‘return’ them to the south, despite the fact that they were born in ‘Khartoum’. 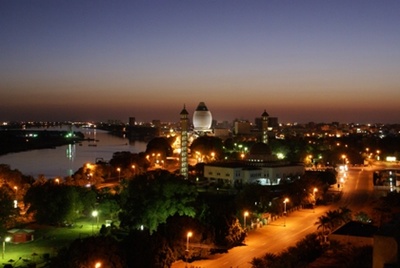 If they are lucky …

These are the people who come through transition camps like Malakal, Francis explains. But, he adds, shaking his head sadly, it is not just like this. It never is. Khartoum will not help them to come, although they are told to leave, and Khartoum will not let them bring any property across the border into the new sovereignty, though they are told to take everything. Such is the vicious cynicism of Bashir’s government. At the border they are stripped of everything valuable. If they are lucky, they enter South Sudan with nothing. ‘If they are lucky?’ Yes, says Francis, many are just handed over to the militias to do with what they like. The ones who reach here, they have nothing, but they have their lives.

Given Francis’ dramatic description of the exodus of returnees from Sudan, the camp suddenly seems quieter than it should. ‘Where are all these people?’ They’re stuck, he says. Khartoum border officials won’t let them through the border, holding them there in a kind of purgatory. Their homes destroyed behind them, but no way across to the other side. ‘But we hear that some are coming soon,’ he adds. The camp is starting to prepare for the next wave of destitute arrivals.

The intention behind the transition camp is to capture the returnees’ details, provide immediate medical treatment as well as nutrition on a short-term basis. Within months they ought to then be moved on to more permanent camps or their final relocation destinations within the country, depending largely on the origins of their southern families. Those left in the camp are waiting for confirmation from the government that they may settle in Malakal itself. They have been waiting for three years. The UNHCR is not able to feed returnees in the camp for more than a few months, so they must find their own food. That seems like an impossible expectation, but I say nothing. ‘We hope for a decision soon,’ Francis says with no hint of sarcasm.

I am haunted throughout our discussion by the vision of this amiable man as a young boy, grabbed by soldiers from the school gates, only his study books left lying in the dirt for his family to find. He shows no bitterness. ‘I decided very soon, to think of my mother, to remember my home, it would be useless. It would break me. So you just decide, where ever you go, where ever you are, this is the place. And you are okay with this. Even though you are small. This is life.’

I shake my head. Francis laughs aloud at my emotional response, his mouth wide and his eyes sparkling. He puts his hand on mine to settle me. ‘Andrew, life is hard. When you are born, you must decide, are you going to live or not. And if you decide to live, then you must know, you have to push. Life is hard.’

Then why am I the one with tears in my eyes, and he the one holding my hand in comfort and laughing.