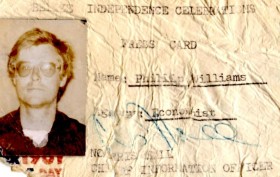 My End of Empire by Philip B. Williams The British crime novel surely wouldn’t exist without some class consciousness. The British Empire was defined by it. Our author was witness to it’s end at a far away place. More of his musings to follow. Last October I went to a Halloween costume party. I dug out an authentic mildewed solar topee, original British army long khaki shorts, and a bedraggled bush jacket that had been moldering in my basement for decades and went dressed as a dissolute British District Commissioner beached inRead More