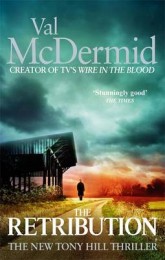 “My Granny is a Pirate” is a wonderful light, rollicking, yarn by Val McDermid. Highly recommended for children of all ages.  Her latest fare, “The Retribution” is the opposite – dark, brooding and bleak. It is certainly not recommended  for all ages and perhaps even some of her fans will be put off by the devastation that is wreaked.

According to the Oxford English Dictionary, retribution is defined as a punishment inflicted on someone as vengeance for a wrong or criminal act.  Jacko Vance whom we met over twelve years ago in “The Wire in the Blood” and who is the  “killer of seventeen teenage girls, murderer of a serving police officer, and a man once voted the sexiest man on British TV” is seeking vengeance. The people he wants to inflict his punishment on, are those he considers responsible for his incarceration – DCI Carol Jordan and psychological profiler Tony Hill and  Jacko’s ex-wife. But how will he do that? What cunning and cruel plans will he make to wreak havoc on their lives and make them suffer extreme emotional hardships?

Val McDermid takes her time in detailing Jacko’s plans and for good measure throws in another serial killer who kills street prostitutes using a different modus operandi each time but always leaving a tattoo on the wrist of each victim.

The psychopath and the serial killer stories are interwoven like the strands of a DNA-helix. Jacko Vance is the super-god of psychopaths, good looking, charming, manipulative, intelligent and exceeding wealthy, and in some ways reminiscent of Hannibal Lecter. The opposite is true of the serial killer, he is the “loser”, not flamboyant, not good looking, not charming and perhaps all the more real, and on reflection, even scarier than Jacko.  But the story isn’t really about the loser, it is about the impact that the vengeance taken by Jacko has on his victims and in particular Carol Jordan and Tony Hill and on their relationship. 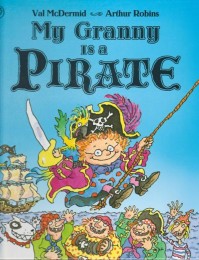 Both Carol Jordan and Tony Hill are complex, complicated and damaged people. Their fragile relationship is strained and is put under increased pressure, by the sadistic malice of Jacko and their reactions to it, as well as the increased work pressure resulting from the serial killer and the break up of the squad. The strain is unrelenting and intolerable.

Val McDermid digs deep into Tony Hill’s background and upbringing, bringing to the fore facts that bear more than a passing resemblance to the serial killers he profiles. McDermid also shows aspects of Carol Jordan that haven’t been seen before and which reveal her insecurities.

It comes as no surprise then to see the effect of devastation wreaked by Jacko. The only ones who manage to come out relatively unscathed are his ex-wife and Tony Hill’s mother, but even they undergo mishap and misfortune.

McDermid manages to build up suspense quite nicely along the way and tries to add depth to her characters. The story is action packed and when things begin to flail, there is help in the form of the serial killer and the pace picks up once again. The destruction that is engineered by Jacko is worthy of a Hollywood script and the shell-shocked characters tend to take second place to his antics. The ending when it finally arrives, doesn’t leave one breathless, but rather makes one smile at its ludicrousness, but then, an over-the-top character like Jacko Vance, requires an over-the-top ending.

Readers looking for a happy end, where everyone lives happily ever after may be disappointed. This is an audacious Val McDermid, challenging her readers with a dark, action packed story and putting her characters on the line, by showing their hidden sides.  The only similarity between this book and ‘My Granny is a Pirate” is the name of the author, that she is able to pen two such diverse books is no mean feat!