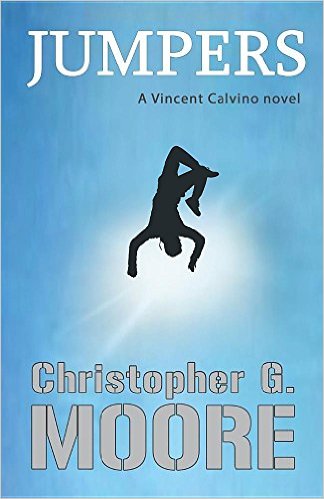 Christopher G. Moore is a master message teller as he crafts his crime tales. Jumpers is #16 in the Calvino series and as a long-time fan I am familiar with the cast of characters: Vincent Calvino, Bangkok P.I. and his cover my back, retired Royal Thai Police General Pratt – not many friends have matching bullet entry wounds for looking after each other. Ratana his loyal secretary, and the cranky and pleasure seeking pal, McPhail. The One Hand Clapping Massage Parlor also makes a cameo appearance or two.

Jumpers features the complex, questionable suicide of Raphael, a young and talented artist who likes to paint the working girls of the Bangkok night. Raphael has a voracious appetite for painting and women with a little Muay Thai on the side. His appearances are a mixture of flashbacks and memories. I liked him better alive than dead but as suicides go he went out in style. Jumpers came across to me as a straight mystery with plenty of components, including a freedom portrait art series that Calvino takes part in, painting forgeries, counterfeit money, Bitcoins, the omnipresent secret notebook that contains incriminating info, a well written Chinese heavy named Sia Lang, and a Hong Kong billionaire who could prove problematic for Calvino.

We learn that, “What an artist looks for is what other people hide.” But it turns out the artist is hiding a great deal himself not the least of which is a cool $750,000, which he has left in his will to the suicide hotline group where he used to volunteer. Calvino, of course, is the executor of the estate. Vincent is more brainy than tough guy these days, more likely to be found cleaning his gun than firing it in junta ruled Bangkok. Pratt, likewise, cannot be found playing the saxophone but he gets in plenty of appropriate Shakespeare quotes, at one point musing that the Bard must have been a Thai in a former life. There is still plenty of action as Calvino manages a good head slam for a TKO in a bar with four sharks swimming in a tank overhead. Justice eventually gets carried out noir style, by the other bad guys and there are plenty of them. But as Calvino concludes, “Dig deep enough down and you will find some good in everyone.” That is certainly true of the philandering Raphael and the many models who drop by to shed their clothes at his busy studio.

There were times where a story board would have been helpful to keep track of the characters and plot points but the author does a good job of tying things up at the end and we find out a recurring question for Vinny that many an expat has asked himself: should I stay or should I go? Moore excels once again at deciphering the culture clash we call Bangkok. While the story is the best since Missing in Rangoon it’s all the message points that make a Moore novel worth the time for me. As when Calvino goes to visit a psychologist and counselor named Gavin who runs the Bangkok Suicide Hotline. It’s like a cerebral shootout at the I’m OK, You’re OK corral.

I like the way Vincent thinks nowadays. Whether he has changed or I have changed I am not sure. As is written late in the book, “In the noir landscape of Bangkok, the default was tragedy; things rarely ended well.” A possible exception is Charlie, a Golden Retriever featured throughout the novel. Charlie loses two owners to suicides in Jumpers, but I see a good future for him, and Vincent Calvino too.

Jumpers is a dense read full of great messages and those messages will be different for each reader. That is Moore’s strength. Jumpers takes you on a personal and cultural journey. It leaves you with as many questions as answers but that is quite alright with me. Dig deep into Jumpers by Christopher G. Moore and you will find plenty of good messages sitting right alongside the default tragedies that find everyone, whether you live your life as a work of art or not.