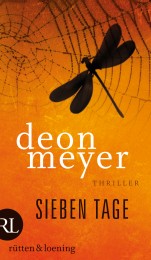 From high tech to low tech

Benny Griessel, hard-bitten cop and recovering alcoholic, is back. He is given a case that is 40 days old and the only lead is a set of nude photographs of the victim, attractive lawyer, Henneke Sloet and bizarre, anonymous emails.  The Hawks, the elite arm of the National Prosecuting Authority  (NPA) in its fight against organised crime and corruption, have enlisted Benny’s help to solve the murder after receiving a series of emails insinuating that there is a cover up of Henneke’s murderer. The author of the emails will shoot a policeman a day until the murderer is brought to book. The e-mailer claims to know who the murderer is and quotes religious verses whilst referring to the murderer as a communist.

The plot twists and turns covering the complexities of Black Economic Empowerment (BEE) and organised crime.  BEE, although aimed at enriching and upgrading the lives of the majority of blacks by transferring a large percentage of ownership of traditional white businesses into the hands of black stakeholders has succeeded for the most part in only transferring enormous wealth into the hands of a select few.  Thereby providing fertile ground for all sorts of nefarious activities and underhand dealings with linkages to organised crime not unheard of.

Meyer rounds out the Benny Griessel’s character and the reader gains a new respect for Benny as he tries to come to terms with the way his life has turned out and his new love interest, the beautiful but semi-recovering alcoholic, Alexa Barnard, whom we previously met in 13 Hours. Benny transitions from being a clichéd cop to a sort of an ‘everyman’. He is a product of his upbringing, growing up under the apartheid government, having had to do national service and then going into the police force. His background taught him that ‘real men’ do not talk about what they experience and he has a lot bottled up inside him.  The use of technology does not come easy to him and he struggles to come to grips with the latest technological developments, although he quickly learns the value of social media as a means of keeping abreast of family developments.  Bennie is under increasing pressure to solve the apparently perfect murder as the anonymous e-mailer steps up the pace by wounding two policemen before killing a third. 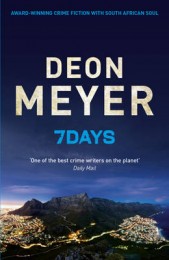 Xhosa, IsiZulu and Cape Flats Afrikaans with traces of Malay and French

The characters depicted by Meyer are vividly brought to life and are easily identifiable. He manages to describe the characters in a realistic way and in so doing provides a microcosm of South African society in the Western Cape. It is a crucible of colour and languages. The people are coloureds, blacks and whites. The languages are English, Afrikaans with a hodgepodge Xhosa, IsiZulu and Cape Flats Afrikaans with traces of Malay and French. The European influence on the Cape is reflected in the wine industry, an inheritance from the French Huguenots, and the organised crime, a more recent import from Eastern Europe. The contradictions and complexities of the characters and their racial make up and attributes weave an interesting background to the story.  The descriptions of the locations inhabited by the characters are suitably apt and reflect Meyer’s obvious love for Cape Town. Meyer subtly incorporates the political scandals which occurred when he was writing the novel and this adds an unexpected level of realism.  The descriptions of the way the Hawks function, and the references to Vusi Pikoli, bring to mind the politics of the time and the fight for Presidency between Thabo Mbeki and Jacob Zuma.  Vusi Pikoli was the Head of the NPA who was fired after successfully laying criminal charges against Jackie Selebi, the disgraced previous head of the South African Police force, in what was seen as the time as an attempt at a cover up by the Mbeki administration.

Meyer entwines the different strands of the story and we become intimately involved with the characters and in particular the murder victim. She is not a passive victim but a fleshed out character . In the previous novel, Griessel was given only 13 Hours and in this one he has 7 Days. In both the pressure is unremitting and relentless. The reader experiences the complexities, the frustrations, the challenges, the disappointments and the hopes of the characters, while the tension mounts and the climax, when it comes, is unexpected and yet plausible.

In short, “7 Days” is a gripping yarn with a bit for everybody from high tech to low tech, from hard-bitten cop to modern day romantic and also possibly from old school to new school. A non-challenging but compelling read.  Highly recommended.