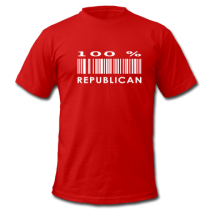 Lee Atwater, the late operative for America’s right-wing Republican party, is described by numerous detractors as the godfather of contemporary xenophobic dog whistles to the baser instincts of a vastly Caucasian political force in the United States.

Mr. Atwater (1951-1991) made his professional bones as chief dirty trickster for the 1978 U.S. Senate candidacy of his own godfather——fellow South Carolinian Strom Thurmond (1902-2003), a white supremacist who secretly fathered a child with a sixteen-year-old black housekeeper.

Given the color-consciousness of many, if not most contemporary Republicans, the godfathers may well be smiling from wherever they are, above or below. Neither mentor nor protégé was shy about candidly expressing racial sentiment in the political context.

Mr. Thurmond came to national prominence during the presidential contest of 1948, in which he was standard-bearer for the short-lived Dixiecrat party. According to the archives of National Public Radio, he declared during that campaign:

“[T]here’s not enough troops in the army to force the southern people to break down segregation and admit the nigger race into our theatres, into our swimming pools, into our homes, and into our churches.”

As quoted in Southern Politics magazine in 1990, a year after he became chairman of the Republican National Committee, Mr. Atwater explained the historical evolution of certain talking points he recommends for office seekers endorsed by his party:

The highlight of Mr. Atwater’s years of slinging “all that stuff” was the so-called Willie Horton spot he commissioned for the presidential campaign of 1988. Notable for its glaring jailhouse mug shot of Horton, an African American felon who briefly qualified under Massachusetts state law for weekend furloughs from prison, the TV commercial was calculated to scare the bejesus out of white voters——and to a large extent did so.

Mr. Atwater’s client in the ’88 election was Republican nominee George H.W. Bush, who won a convincing victory over Michael Dukakis, the Democratic governor of Massachusetts. The Horton spot inferred that Governor Dukakis personally allowed a decidedly unattractive black male convicted of homicide to run wild through the streets of Boston, whereupon he raped a pretty white female and stabbed her white fiancé.

Mr. Atwater died of brain cancer in 1991, at age 40. Perhaps he was unacquainted with a younger man who at the time was president of the Harvard Law Review. But had Atwater known Barack Hussein Obama, he probably would have failed to sense White House prospects for a literal African American, of black Kenyan and white Kansan parentage.

Some see the godfathers’ ghosts at play all these years later, busily spooking the rude precincts of America’s white electorate. But in lieu of saying “nigger,” as Mr. Thurmond would and did, euphemisms applied to Mr. Obama have a mostly Atwaterian ring:

• “America’s food stamp president” was among Newt Gingrich’s numerous racial pejoratives during his bid to serve as Great White Hope of the Republican party. (The “food stamp” reference is to a federal program of nutritional assistance to the poor, an economic status that Republicans habitually conflate with African American. In fact, according to government records, the great majority of food stamp recipients are white.)

• The phrase “skinny ghetto crackhead” tripped smirkingly from the tongue of Fox TV News commentator Brent Bozell, meant to infer similarities between down-and-out urban black males and the president of the United States.

• Texas Governor Rick Perry, another of Romney’s rivals once considered odds on favorite to oppose Mr. Obama in November, frequently hosted Republican moneymen at his family’s private hunting camp, known for years by its stone marker at the entry gate: Niggerhead.

• When Mitt Romney had vanquished the likes of Messrs. Santorum and Perry to become the Republican candidate for the presidency, it was due in part to a nostalgic catchphrase used in TV ads on his behalf——“Keep America America,” just one letter removed from “Keep America American,” the venerable Ku Klux Klan slogan. Coincidence?

First Lady Michelle Obama, whose parents are both black, is victim to her own share of coy bigotry.

With reference to her crusade against childhood obesity, white Congressman Jim Sensenbrenner, a Republican from Wisconsin, complained of Mrs. Obama, “She lectures us on eating right while she has a large posterior herself.” This prompted Mary Curtis, the Washington Post columnist, to ask, “Can you imagine how the incident would play out if an African American congressman made a crude remark about First Lady Laura Bush’s body?”

A fervent California supporter of the Republican cause apparently considered even the Obamas’ two daughters as fair game for crudity, and fatal violence, at least rhetorically.

In a February rant via Facebook, Jules Manson of Carson City, a failed candidate for local office, advocated the assassination of the president and his “monkey children.” Subsequently, the U.S. Secret Service paid Mr. Manson a home visit, with the result that we’ve not heard further from him.

According to journalist Ronald Kessler’s book “In the President’s Secret Service,” threats against Mr. Obama’s life have increased by four hundred percent over those of his predecessor, George W. Bush. Significant cuts to the agency’s budget were made when Mr. Bush folded the Secret Service into a new bureaucracy, the Department of Homeland Security. The cuts remain in place.

To document each and every “nigger” locution heard across America on a given day is impossible, of course. But even those duly recorded by television cameras——as on March 20, 2010, when African American Congressmen John Lewis and Emanuel Cleaver were spat upon in a shower of “nigger” epithets howled by overly racist Tea Party loiterers on the steps of the Capitol in Washington, D.C.——is pugnaciously denied by right-wing radio broadcaster Rush Limbaugh and other Republican luminaries.

In an interview with a reporter for the McClatchy newspaper chain, Mr. Cleaver said of the spitters, “It was a chorus. I feel sorry for those people who are doing this nasty stuff. They’re being whipped up.”

Americans of ecumenical outlook might find it easy to despair of the racist beat that still throbs in the hearts of many white Republicans——candidates, wingnut voters and broadcast apologists alike. All might reference the clownish, one-off failed Republican candidacies of black pizza magnate Herman Cain (for president) and Alan Keyes (for the U.S. Senate, in a 2004 contest in Illinois against Mr. Obama himself) as proof that their party is color-blind. Those candidacies, or the loopy pronouncements of black Congressman Allen West, who said of 193 Congressional colleagues, “About seventy-eight to eighty-one members of the Democratic party are members of the Communist party.” (Mr. West proffered no such claim of his 242 Republican colleagues.)

But Maurice Berger, author and scholar in the field of white racism, is not to be deterred from his prediction of a relatively fair-minded political future, one that could arrive as early as November’s presidential election.

“Older white voters are dying off and being replaced by Hispanics, others of color, and progressive young white voters,” Mr. Berger said in an interview. “I’m not sure [race baiting] will work. This rhetoric will turn off many, if not most, independent voters.

“This is a country that has changed dramatically over the past fifty years. This is becoming a country of so-called minorities, and Obama represents that——dynamically,” said Mr. Berger, who is also a University of Maryland professor and consulting curator for New York’s Jewish Museum.

He added, “We may see the Obama presidency as the beginning of a trend, not just an anomaly.”

In his April 16 column for the Washington Post, Charles Lane underscored Berger’s view.

“It’s hard to see much future for a political party that has minimal support from blacks and Latinos…[P]arty racialization is approaching the point of diminishing returns,” wrote Mr. Lane. Of the Republican brand, he intimated in a closing line, “[T]he losing party in 2012 will conclude that it must broaden its base, or die.”

Mr. Berger suggested that the Democratic party, too, has power to lose unless liberal white adherents acknowledge their own brand of nuanced racism. By way of example, Mr. Berger spoke of a liberal acquaintance——an art critic who published a Facebook screed about the dearth of black people in studio audiences during the seemingly endless series of debates among Mr. Romney and his Republican rivals.

“The thing about this critic,” said Mr. Berger, “is that I’ve been to social gatherings at his home, and I’ve never once seen a black person there.”

The incipient optimism of Messrs. Lane and Berger aside, today’s Republican campaign discourse “hurts, it really hurts,” said Toni Morrison in an April 13 interview with The Guardian of Britain. The African American novelist and Nobel laureate said the hateful language of Republicans is a “very deliberate vocabulary of [racist] code” that is “embarrassing for my country.”

More and even greater embarrassment looms on the horizon.

“Larry McCarthy has been responsible for some of the most negative ads in American history,” Darrell West, vice president and director of governance studies at the Brookings Institution, told the Huffington Post.

Back in 1988, it was Larry McCarthy whom Lee Atwater hired to create the infamous Willie Horton spot, which Mr. Dukakis remembers only too well.

“McCarthy’s playing an important role” in the Romney campaign, said Mr. Dukakis in the Huffington Post report. “So it’s obvious what’s going on.”

Indicative of obvious TV spots to come, NBC Television news recently reported that secret contributions to the Romney cause exceeded $52 million, compared to $9 million for the African American incumbent.

(NOTE: The text above is adapted from an earlier essay published in the Washington, D.C.-based Highbrow Magazine).