Photographs of the maRock by Aldo Brincat 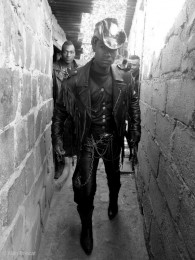 Arts in Botswana – a photographic exhibition

Photographs of the maRock, black leather clad black urban cowboys in a stunning array of poses is what grabs your eyes at the photographic exhibition of the maRock, currently on at the Sophie Lalonde Gallery in Gaborone, Botswana. Aptly titled Foreign Nationals, the maRock are both foreign and native to their land. Distinctive in their post-apocalyptic leather, the maRock express a hitherto as yet relatively unlikely symbiosis of art and culture in all its forms.

When people are asked what they know about Botswana they will probably tend to say it’s in Africa somewhere and there are wild animals. They may even say that there is the Okavango Delta and there are diamonds. The more literary inclined will probably mention Mma Ramotswa from the No. 1 ladies Detective Agency. Some may even mention the Detective Kubu series, the collaborative efforts by Michael Stanley; in real life Michael Sears and Stanley Trollip. But few will mention the maRock. Black, Death Metal Rocker Cowboys are generally not how Africans are perceived. 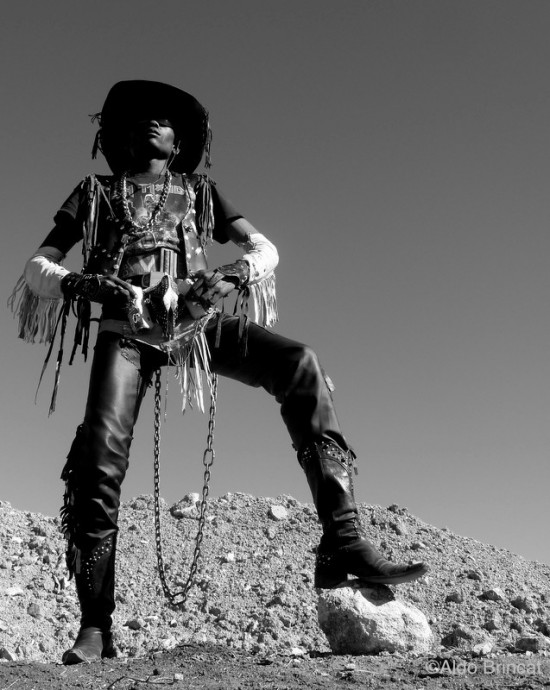 The maRock is a subculture that like all subcultures defies and challenges everyday perceptions. There are over 2000 people who claim to be maRock. They have been spawned in the land of diamonds, Bushmen, heat, dust and cattle. The Batswana (the name of the people from Botswana) love their cattle. There are cattle everywhere from the roads of Gaborone through to the cattle posts in the hinterland. The maRock embody that love of cattle. They are an eclectic group of people, predominantly men who get together seeking comradeship. They come from a diverse range of backgrounds united by their love of Death Metal Rock and penchant for leather clothing. Apparently there was an obscure band of musicians in the 70’s who made Death Metal Rock music in Gaborone. This was enough to sow the seeds of the maRock whose movement has now lasted several generations. Unlike the punk subculture, this one has tended to flourish. The maRock revel in the impact that they create with their self-crafted studded leather, urban cowboy swagger and style. When they are out in force crowds come to a standstill; their presence is electrifying. They jar the notion of complacency. They are not a bourgeois construct. They are art made live, dramatic, intense, evocative and visually appealing. They want to be seen, to be noticed. 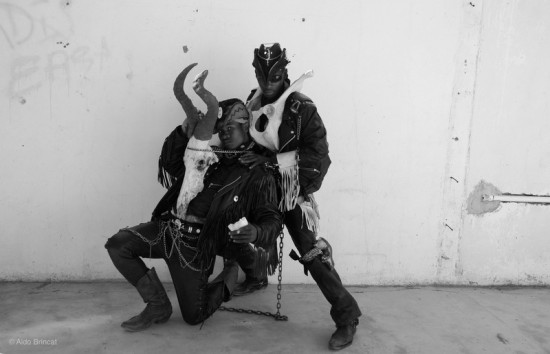 It took another artist, dramatist and actor, Aldo Brincat to see beneath veneer and understand the complexities that lie at the heart of the maRock. Brincat who has won accolades for his acting, teaching and productions, was totally enthralled and enraptured when he first saw the maRock. He immediately understood the nature of their impact and was astounded by the amount of work that went into the maRock production. He immersed himself in the subculture by getting to know the members and photographing them. That the photos he took are dramatic is no surprise but what is surprising, is the visceral impact of the masculinity and virility that is tinged by an element of the bizarre. But like all great productions the day-to-day reality for the people who are the maRock, is for the most part, hard. The glamour of being a maRock is underscored by grinding work or looking for whatever work is available. It is for this reason that the proceeds from the sales of the photos at the exhibition will be for the maRock. 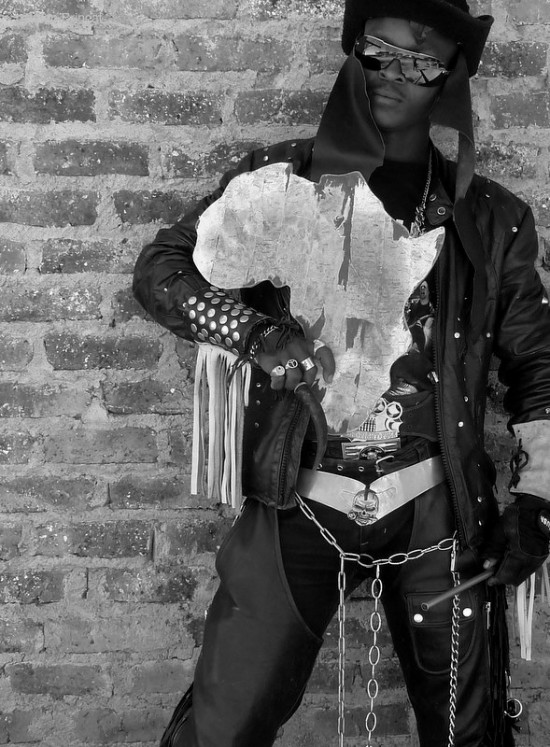 The maRock and the exhibition of their photographs reveal a seam of life that is so totally unexpected in Botswana but on reflection reveal the zeitgeist of Gaborone today. Botswana is changing from a sleepy, dusty village into a fast changing urban skyline as architects try to outdo each other by building interestingly shaped buildings. The trend is towards modernity with only a few giving a nod to traditional colonial styles, but then Botswana was one of the few, if not the only African country never to have been colonised. It was a protectorate of the British Empire who never seemed to know what to do with it. So perhaps it is not too surprising that the maRock came into being. People aren’t sure how to deal with them. Their aloofness and presence tend to inhibit familiarity. They make manifest and real the fusion of cultures and challenging stereotypes. The maRock are authentic and that is cool.

Gaborone is moving beyond the village and into the urban jungle and its inhabitants are people like the maRock and Brincat; helping Gaborone find its edginess and itself.