Krimigedicht: The Hanging of Charlie Birger 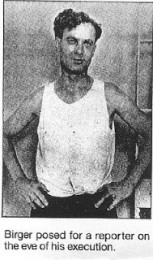 The Hanging of Charlie Birger

I will tell you of a bandit in a great midwestern state
Who never learned his lesson until it was too late;
This man was bold and careless and the leader of his gang
His boldness did not save him when the law said, „You must hang.“

This bandit’s name was Birger, he lived at Shady Rest
The people learned to fear him throughout the middle west;
It was out in old West City, Joe Adams was shot down
Then the cry of justice said, „The murderers must be found!“

Dan Thomasson was arrested, he turned state’s evidence
Charlie Birger was found guilty for he had no defense;
He asked for a re-hearing; But this he was denied
Out in the county jailhouse, to take his life he tried.

On the nineteenth day of April in nineteen twenty-eight
Way out west in Benton, Charlie Birger met his fate.
Another life has ended; another chapter done
Another man has gambled in the game that can’t be won.

Oh, the holy Bible shows us the straight and narrow way,
And if we do not heed it, some time we’ll have to pay.
We all must face the Master, our final trial to stand,
It’s there we’ll learn the meaning of houses built on sand.

First recorded by Vernon Dalhart; credited to Carson Robison, but might have been written by Blind Andrew Jenkins.