There are several, often conflicted, ways of looking at Lester Young, the American tenor player who was born, one of six children, in Woodville, Mississippi, in 1909, and who died, a crumpled, sick man, in March 1959.

One comes from the poet, William Matthews, in an interview with Dave Johnson, originally published in the  High Plains Literary Review in 1995.

Young was the Donald Barthelme of saxophone storytellers. The work is elliptical, funny, smart, blithe surfaced, and endlessly sad.

Another, quite opposite, comes from another tenor saxophonist, Coleman Hawkins -tonally Young’s opposite, broad and hustling, where Young was leaner and less assertive, the two of them vying for prominence in the 40s & 50s.

That Lester Young, how does he get away with it? He’s stoned half the time, he’s always late, and he can’t play.

Planted myself pretty firmly in the Matthews camp [though I can stand a good amount of Hawk, too] I’ve always listened to quite a bit of Lester – 14 CDs worth at a quick count – and so it’s no surprise comes across as a favourite of Charlie Resnick, also,

He makes a first, fleeting appearance in book one of the series, Lonely Hearts, the first paragraph of chapter four.

The sandwich was tuna fish and egg mayonnaise with some small slices of pickled gherkin and a crumbling of blue cheese; the mayonnaise kept dripping over the edges of the bread and down on to his fingers so that Dizzy twisted and stretched from his lap in order to lick it off. Billie Holiday and Lester Young were doing it through the headphones, making love to music without ever holding hands. Resnick couldn’t stop thinking about the fact that he had lied to Skelton, wondering why.

After that, it’s chapter nine of the second book, Rough Treatment, in which Resnick refers to a photograph taken by the great photographer, Herman Leonard in 1956, three years before Lester’s death,

Anyone in possession of a copy of Rough Treatment and keen (or sad) enough to want to check, will find a number of changes from the original; some of these have been made over the years, usually ahead of a reading – pencilled marginalia, underlinings and crossings-out – some were made an hour or so ago. A piece of work is (almost) never finished.

Miles met Resnick the instant his feet hit the pavement; the cat had recognised the sound of the car’s engine from the end of the street and come running. Now he made his welcoming cry from the irregular stones atop the wall, strutting, tail hoisted high as he presented, turn upon turn, his fine backside. Resnick reached up a hand and stroked the smooth fur of the cat’s head, behind and below the ear.

Once indoors, the other cats came running: Pepper, Dizzy and Bud. Resnick forked cat food from a tin into four bowls, green, blue, yellow, red, then added a shower of dried heaven-knows-what to each. Good, he’d once been told, for their teeth. There had been the usual mish-mash of junk mail inside the front door. From it he withdrew a single white envelope, card-shaped, and slid it between the containers for flour and sugar. The remainder he dropped into the bin. Next, he ground beans ready for coffee and, that done, felt relaxed enough to remove his coat, loosen his already loose tie, unfasten and ease off his shoes. In the living room he selected some Lester Young from the shelf and switched the stereo on low. Sides the tenor man had cut with Johnny Guarnieri in New York City, three days past Christmas ’43 and just shy of New Year. Back when everything must have still seemed possible: the future shining and plump like a fat, silver apple.

Back in the kitchen Resnick lifted Dizzy away from Bud’s bowl before slicing bread, dark rye with caraway. He scooped the contents from a tin of sardines in soya oil, sliced a small onion and spread the rings across the fish; there was a large enough piece of feta cheese to be worth crumbling over the top. „Tried to get hold of you last night,“ Jack Skelton had said earlier, the superintendent barely breaking his stride on his way back to his office. „Time you got yourself an answerphone, Charlie. One that works.“

Resnick stopped to listen as Lester bounced his way through „Just You, Just Me“, the first chorus almost straight, a trio of those trademark honks marking his place near the end of the middle eight, each perfectly placed, perfectly spaced, rivets driven in a perfect line. An intake of breath, just audible, smooth and quick over the brushes against Sid Catlett’s snare, and then, with relaxed confidence and the ease of a man with perfect trust in both fingers and mind, he made from that same sequence another song, another tune, tied to the first and utterly his own.

What are these arms for?

What are these charms for?

The reason Resnick didn’t get an answerphone: how else to keep bad news at bay? The messages that you didn’t want to hear.

He remembered a photograph of Lester Young taken by in 1956. Herman Leonard. Lester is in a recording studio, holding his horn, not playing. The suit he is wearing, even for those days‘ fashions, seems overlarge, as though, perhaps, he has shrunk within it. His head is down, his cheeks have sunk in on his jaw; whatever he is looking at in those eyes, soft, brown, is not there in the room. His left hand holds the shelf with which he will cover the mouthpiece, as if, maybe, he is thinking he will slip it into place, not play again. It is possible that the veins in his oesophagus have already ruptured and he is bleeding slowly inside. 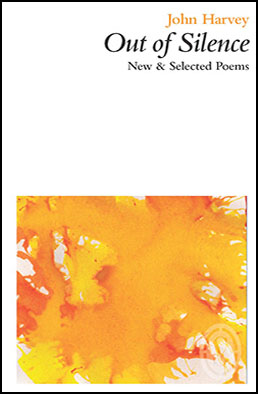 The coffee would be ready. In the kitchen Resnick picked up the envelope, trying to work out how long it had been since he had seen that writing. How many years? He wanted to tear it, two and four and six and eight, all the multiples until it was like confetti. He left it where it was.

Back in the other room, he balanced the cup of coffee on the broad arm of the chair. Lifted Bud with one hand and set him in his lap. The first take of „I Never Knew“ ended abruptly; some saxophone, a piano phrase unfinished. Lester is standing there, tenor close to his mouth, but now he is looking away. As if something has slipped suddenly through that door in 1943, unbidden, out of time. A premonition. A ghost.

It doesn’t end there. Much of the writing about Lester Young made its way, sometimes barely changed, into the poem „Ghost of a Chance„, which can be found in Out of Silence: New & Selected Poems (Smith/Doorstop, 2014).

John Harvey at CrimeMag. His blog Some Days you do …
Just out in England: his novel „Body & Soul„, the fourth in the Frank Elder series. CrimeMag review next month. The first book in the series, Flesh & Blood, has just been re-released as a fine-looking Arrow paperback.