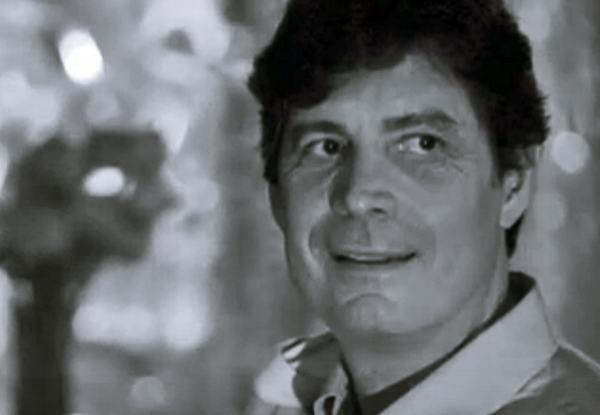 The Headlock of Kinship

Archeological finds coupled with better techniques of carbon dating have pushed back the origins of our species to nearly 300,000 years. The environment in which humans evolved favoured family groups as a cohesive, cooperative unit for food gathering and protection against predators. Complaining about your uncle, grandmother or nephew being idle or incompetent wasn’t going to help. The whole group was interconnected. They stuck together because they had no other choice. And remember, for hundreds of thousands of years, hominids lived in family arrangements far different from our own. The dye was cast.

The family has remained a constant throughout our history. The first political institutions drew from the ‘family’ as a model to legitimize its authority. All of us have valued family. The problem has been how far the family concept can scale to cultural and political institutions involving millions of people. Only in the last few hundred years has there been any widespread political movement based on notions other than ideas and values drawn from the long road from kinship to clan to tribe to nation state. Each step has scaled up our sense of family to include more and more people that our pre-historic ancestors would have considered strangers.

Thailand’s culture largely revolves around a modified kinship model. This is not unique. China is an example of the kind of ancestor worship, paternal hierarchy, father/son set of values that underlies the political system. Given the success of China economically, and the ongoing decline of the United States in its international leadership role, it is time to assess the conflict between kinship-based and individual-based political Systems.

One might argue that the colonial and capitalistic nation-states were able to overcome the old kinship-based civilization, which was the foundation of the scaled up bureaucratic nation-state—an institution that used the cultural rhetoric of kinship as the basis of legitimacy. When, in fact, the nation-state evolved into a system of inclusion of elites. The political system was shaped by innovation, a market system, and co-operation between the ruling class and commercial-trade-innovative entrepreneurial class.

What was new from Europe starting in the 15th century was the evolution of political and economic system that wasn’t primarily kinship driven—or at the very least the kin relationships weren’t used to oppress or suppress the commercial class in order to protect a related class of elites. The co-operation gradually blurred into political participation of a larger set of people. That participation may have been illusory in many cases but it created a new notion—that people were equal, with equal rights to liberty, justice and freedom, and opportunity. These ideals were and are challenged by those who rely on the kinship system as the political model. No one is equal to your father. You have no freedom to defy your father, or challenge his opinions or worldview.

A stumbling point between the kinship-based and individualistic systems is the role of authority and whether there is a built-in respect for authority that limits the kind of challenges that can be made to authority. In Thailand, elders, monks, high-ranking officials, among others have traditionally been guaranteed a high-level of unquestioning respect. But that respect has been chipped away over the last twenty years accelerated by social media—whatever one’s view about social media, most would agree it is not a force designed to advance ‘respect’ for authority. In the last couple of centuries, democracy has come to mean that ‘respect’ for authority is only valid so long as authority respects the wishes of the majority.

In many countries if the respect of those in power has collapsed because of bad policies and actions, there is a remedy: the greedy, inefficient, incompetent or self-dealing authorities aren’t shown respect—they are removed from power by the voters. Not being elected is a signal the voters trust your opponent more than they trust you. Appealing to the voters as your ‘father’ will likely fail to win the day in many countries.

Elections, it turns out, became the ultimate weapon for the ordinary citizen to show his or her disdain for the governors and to elect new people who promised better policies. An election was a test of whether voters continued to respect the government and leaders who were made accountable—at least in theory—for their action as the price for their respect. The problem with the traditional kinship/respect model was its rigidity. There was no social or political space where someone could show disapproval without it being interpreted as disrespect. Respect means submission to the judgment of someone the traditional members of society cloak with the garment of respect.

Disrespect, in the traditional sense, has always been viewed as highly personal. No one likes the ordeal of mud being slung at them in public or before their peers. It was the idea of the right to respect that men used to fight duels over. In the modern political era, respect was earned. Performance, competence and expertise became the new political currency, which has gradually reconfigured the conditions on which respect was paid to someone.  That’s a huge change. Respect went from being unconditional to conditional. This is perhaps the major change politically in the last 250 years, and with Trump it is looking like there is a movement to return to the unconditional respect value system in the West.

The culture of youth connected like a digital umbilical chord to social media has collapsed the distance between people and ideas. The rapid transformation that has empowered and encourage youth to freely ‘share’ their ideas and messages has resulted in a pushback from those who continue to believe in the unconditional respect of the past. Censorship of social media has been the official response in a number of countries.  But it is unclear how successful governments will be in managing and controlling disrespectful content given there are 2 billion Facebook readers. Not only in Thailand are authorities under pressure to enforce conformity, worldwide the youth, who have grown up on digital information, roam freely, exchanging views and ideas, images, gossip, likes and hates. Inside this new chaotic, disrespectful technological space, the audience that supports unconditional respect for authority will dwindle. Social media works as digital democratization of culture creating a free zone to exchange views that may be disrespectful. And this new cultural sandbox explains, in part, the huge attraction to the young trying to find their own identity through their online relationship with people and Information.

An illustration of the conflict between these two positions on the nature, right and scope linked to public demonstration of ‘respect’ came to a head at a freshmen initiation ceremony at Chulalongkorn University in Thailand last week. Every year there are stories, some outrage or another, about initiation rituals at many Thai universities. In this case, the ritual required freshmen to prostrate before the monument of King Chulalongkorn, who established the university and who abolished slavery and prostration. Some students objected to prostrating on the ground, saying they had a prior agreement with the university to show respect by bowing instead. A small number walked out of the ceremony. 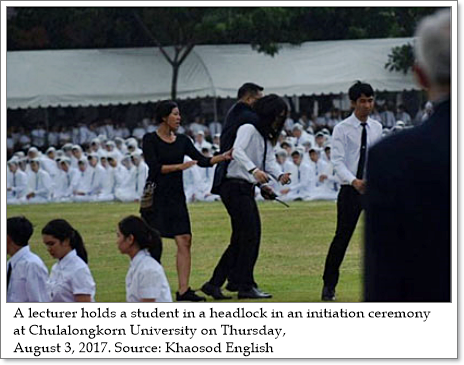 A photographer caught the moment when a lecturer held one of the protesting students in a headlock, dragging him away. Photographs and video were widely circulated on social media. Both sides of the Thai political divide—tradition vs. progress—turned to social media to offer their views on what had happened, why it happened, and who was responsible. To enforce respect against the consent of those from whom it is demanded requires a set of good arguments, or alternatively a headlock.

The role of respect remains contested among factions in Thailand. There is little tolerance shown toward students who were willing to show, in the view of faculty members, disrespect.  You are in deep waters once you are deemed disrespectful in Thai culture.  Bangkok Post columnist Kong Rithdee summarized the larger message sent by the conduct at the initiation ceremony: “In Thai society, teenagers who speak up, walk out and question what hasn’t been questioned for decades are viewed as insolent, attention-seeking and all-around detestable.” Nonetheless the testing of the boundaries of respect and disrespect continue.

There is a long history connecting respect cultures with the right to use intimidation, force, or violence to enforce that value. The essential difficulty with the kinship/respect model is there isn’t a clear, efficient process to throw out the incompetent family member or friend. Inefficiencies are absorbed as part of the costs of keeping the family a happy place for all of its members. The inconvenience, damage or loss that occurs and accumulates as a result of protecting kinship-based cultural system isn’t a cause for challenging authority. It might be the exact opposite—the high official who covers for his incompetent niece or nephew is seen as reinforcing the importance of family. As without a secure, protected family, so the story goes, no public good can succeed and no peace secured.

What makes the Trump presidency unusual is, by chance or design, his crude graft of the kinship/respect culture onto the American democratic model. He’s brought his family to the White House. His businesses flourish. There is no apparent distinction between his personal ambitions and public duties. In Trump’s case, unfortunately he lacks the Chinese respect for science and education. Trump’s kinship model is closer to a Medieval European model than to a modern Chinese one where kinship has drawn significant gain by advancing an engineering class of technocrats to design and carry out the nuts and bolts of governance while leaving respect to the elders and family as an important political pillar to the System.

The question is whether the Chinese model will be the one that replaces the American model on which political institutions are founded. Trump has put America in a headlock and is dragging it off familiar turf and into a wholly different kind of game. This has shocked and terrified people who took the American institution-based system for granted. They never thought that America was that kind of political system. A political system is its institutions, and its institutions are its people, and the people have a cultural bias as to the role of authority and respect.

China was a strong civilization centuries before the rise of the West. In the long run, historians may see Trump’s election as the beginning of the end of what was a failed experiment to break with the kinship/respect model. Alternatively, with the rapidly changing digital environment it may be the kinship/respect model is already exhausted, and a new system, yet undefined, is emerging that is neither Chinese nor American, neither Eastern nor Western.

We are always at some crossroad of history. We’ve reached such a crossroad and it is unclear which path we will follow as one leads to the headlock of respect while the other path leads away from unquestioned, unchallenged respect in the same way we chose to leave the path of slavery. We can do better as a species, and as people, once the ideal of the family with the father/husband at the head is no longer the metaphor used to mint licenses to exploiters.