An Oscar for Snowden’s Black Mirror

Watching the John Oliver’s Last Week Tonight featuring an interview with Edward Snowden in Moscow is a parody of Black Mirror,  the Channel 4 award-winning TV series created by Charlie Brooker. His interview might have been drawn from the premise of the episode titled Fifteen Million Merits—set in the dystopia future where a citizens’ drone-like life is a routine of mindless work-fitness-entertainment-confinement inside a doomed and bored life. The main character in Fifteen Million Merits is Bing who he has the idealism, courage, and conviction to expose the cruelty and dangers of the ‘system’. He’s found a way out of his narrow, confined life of repetition by buying his way as a contestant on a TV reality show. His purpose is to rage against the unreality of life, which lacks meaning outside of personal consumption, where people have become robots condemned to servitude.

Bing threatens to kill himself with a piece of glass during his performance. With the shard pressed against the artery at his neck, Bing rails against the unfeeling robot-like consumption life. Moral and ethical life is a thing of the past. Citizens have been turned into puppets and the main obligation of the state is to entertain them. Bing, like Snowden, points at the strings attached to us all. He’s angry and he’s articulate about how we demean ourselves and that it is better to die than to continue living such a meaningless existence. He reams the ‘system’ to expose the hollow core where a few control and program the many.

Rather than seeing the full frontal attack as a threat against a totalitarian system, the judges take his ‘performance’ as a brilliant piece of theatrical entertainment. The audience is in love with Bing’s rage with the glass shard at his neck. Not because of the content of his message but the explosive sincerity in which it was delivered. At the end, Bing rather than taking his own life to end the absurdity of his existence becomes another regular performer on the reality show. The message of Fifteen Million Merits is Huxley’s Brave New World was a guidebook to the future. Rage and anger are folded into the entertainment industry. Bing was co-opted. Was Snowden co-opted in a similar fashion? That’s the question.

John Oliver like the judge in Fifteen Million Merits did what no NSA or CIA operative could have done to undo Snowden. To entertain the viewers while making them understand what their civil liberties and freedoms were reduced to if the government uploads your ‘dick pictures.’ Those selfies of your ‘junk’ –the catchy little phrase Snowden used in the interview, to much of the delight of John Oliver. It was as if Bing’s sober twin had appeared on the screen and the script of Fifteen Million Merits had been adjusted for an American audience. Snowden has had a shard of glass at his throat since he holed up with Glen Greenwald and Laura Poitras in 2013 in Hong Kong. CitizenFour, an Oscar winning documentary, revealed the backstory of Edward Snowden’s role in disclosing the massive surveillance run by the US government with a number of its allies to maintain information about its citizens. Culled from Google, Facebook, YouTube, Twitter, phone calls, text messages, the amount of information collected behind the smoke and mirrors of lies blown up the ass end of Congress should have caused a revolution.

When John Oliver did the man in the street interview in New York City, asking people if they’d heard of Edward Snowden, most hadn’t. Those who had clearly had been brainwashed by the official blowback that Snowden was a traitor, a thief, someone who was a criminal with bad intention. The government had attacked the messenger and that effectively had killed the window for his message to filter into the minds of most people. What Snowden had expected from the release of the massive surveillance was indignation, outrage, calls for investigations, and angry groups of citizens demanding and lobbying for restrictions on data collection by the government. That didn’t happen (except within the narrow confines of the international chattering class). Not in the political mainstream of American life. Most people didn’t care. Snowden wasn’t on their radar screen. Or if he appeared, it was as someone who was a bad American who should return home for a proper trial of his crimes before being sentenced to life imprisonment without parole.

Enter John Oliver as your show host of the dystopia reality series where the goal is to make Snowden’s message entertaining. Unless he qualifies as a standup comedian, he has no message that will be heard. Snowden performed. Like Bing in Fifteen Million Merits he seemed to understand while on stage that no serious message can be sent unfiltered to a mass audience parallels the NSA universe where unfiltered communications from the masses can’t be perfectly monitored or understood. Oliver frankly told Snowden that his attention wandered, his eyes glazed over as Snowden made an impassionate argument about the dangers of mass surveillance. The only salvation was to retool the message as another ‘dick photo’ story. One wants to say a ‘dick photo’ that has legs. But of course it has legs.

Those legs have taken us into the playpen where like children we can giggle, nudge each other, and feel a sense of personal vulnerability. That could be my ‘dick photo’ suddenly has the audience’s attention. They are now listening to Snowden. While Snowden doesn’t have a glass shard pressing against his throat, he has something better. He now has a laugh track and an applause meter with the needle registering in the red zone. Snowden has shed Noam Chomsky and embraced Lenny Bruce. He has shifted to the reality show, comedy central entertainment paradigm to communicate. Snowden is part of show business.

The piece de resistance came at the end when John Oliver pulled out two Oscar statues and handed one to Snowden. The Oscar was made of chocolate. To Snowden’s credit he didn’t follow his interviewer’s lead and bite the head off the Oscar. As the program ended, I thought there is a good possibility that in the future Edward Snowden will be credited as the person who popularized the word ‘junk’ to refer to a man’s penis.

John Oliver has Bingfied Snowden. Snowden, and his ‘junk’ metaphor, has been swallowed by the ‘system’ and elevated him to another amusing TV performer for the masses. Snowden has been reborn, relabeled, and co-opted by a system he believes has the capacity to change when given the right information. To be twenty-nine years old and have such faith is as rare as it is admirable. Now that Snowden knows that unpackaged information, no matter how alarming to experts, has no real audience. It must be tied to ‘junk.’ I guess Snowden has learned a valuable lesson. Will the audience want Snowden, the comedian, back on stage? Perhaps someone will write a song titled ‘Junk’, or a band named ‘Junk’ will emerge, books and articles with ‘Junk’ in the title will appear. Who knows, a TV series titled ‘Junk’ may be being discussed in Hollywood offices as we speak. The entertainment industry will scramble to showcase this fine performer as someone who makes the masses laugh. Only the joke is on them. 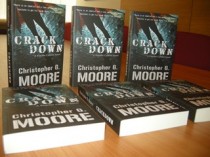 The 4th collection of essays titled The Age of Disconsent is in the bookstore and available as an ebook on kindle, smashword and kobo.
(Also, I wanted to alert you that the print copy of Crackdown has been delivered. I know that a lot of readers still wish to read the physical book. Ebooks aren’t for everyone. That I understand. The books should be in Bangkok bookstore chains within the next week.
If you live outside of Thailand or outside of Bangkok, you can order your copy of Crackdown here:
The Songkran Festival starts in a few days (12th to 15th April). If you are in Thailand, have fun. If you don’t like water splashing, stay inside. Otherwise put on old clothes and walk along Sukhumvit Road and you’ll get your daily shower. If you are driving, use caution. Every year the road deaths over this holiday are horrific. Most of those deaths are from drunk driving. Don’t drink and drive. And if you can avoid driving altogether, that is the best way to increase your odds of staying alive over this holiday.
Reading Crackdown over the Songkran is a good way to stay dry and safe.)