Kafka The Grand Master of Noir: A Lesson for Thailand

The New Statesman had an article titled “Death by data: how Kafka’s The Trial prefigured the nightmare of the modern surveillance state” by Reiner Stach.

While the familiar rallying cry against government oppression is drawn from George Orwell’s 1984 or Animal Farm or Aldous Huxley’s Brave New World, it is Kafka who in The Trial might best lay literary claim as godfather to the modern noir fiction movement. Stach reminds us that while we don’t particularly like Josef K, the doomed protagonist in The Trial, we can’t stop ourselves being drawn to following his downward spiral into oblivion.

Josef K is you. He’s me. He’s done something along the way. What that something is remains vague like a fog that obscures and terrifies. It is that foreboding, that sense of the gravity of terror pulling one headlong into a dystopia and that is the heart of noir fiction. Josef K is a victim. But when that victimhood is traced back to the source, Reiner Stach concludes that the tormentor is to be found by looking into the mirror. We are, in other words, without our personal complicity with surveillance state we wouldn’t become a victim.

We are partners in our victimhood. We work alongside the surveillance state feeding them our most private thoughts, fears, desires, and we confess our transgressions. We do this in public. We post our confessions daily. No need to go to church to find a priest. Our surveillance overlords are our new confessors. We know this is happening and we do nothing to stop it. Not only do we do nothing, we can’t stop ourselves from exposing the details of our life.

This passage from Reiner Stach’s article struck me as relevant to understand something about the current political turmoil in Thailand.

“Kafka was deeply sceptical of the therapeutic promises of psychoanalysis but he was captivated by the way it described the propagation of power, which chimed with his own experiences. Someone who keeps getting told that he is incapable, inferior or guilt-ridden will have to expend a good deal of energy to resist such a self-image and not make himself guilty in his own eyes. He has to struggle not because the forces of power have violated or diminished him but rather because he has been infiltrated by those forces. The poison lodges in his own body.”

The elites and their supporters in the streets of Bangkok are a minority who have pushed back against mass political power. They want to suspend election. They view representative democracy as the enemy. To delegitimize the governing party, they demonize and belittle the common, ordinary upcountry voter who have consistently elected a majority to Parliament, one that fails to preserve and advance their interests. They refer to the ordinary voters from the North and Northeast as uneducated, stupid, easily bought, misguided and their votes ought to count less as a result. They wish to shutdown Bangkok, throw out the election, the prime minister and supporters and seize their assets. 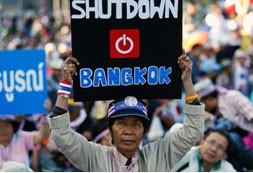 In the last 25 years, the ordinary non-urban voter has carried this baggage. And everywhere he or she looks, from TV dramas, to movies, to novels, magazines, newspapers and TV news, these negative images act to diminish and belittle. It infiltrates the mind and heart. The effect is to blunt a movement to expand civil and political rights. The minds of the diminished, like that of Josef K, feels under constant pressure, watched, excluded, an object of suspicion.

With a broad-based message from the media, schoolrooms, the better educated, and politicians, people aren’t just influenced; the operating system of their consciousness is set along perimeters that aren’t questioned. It is difficult to reset the mental operating system of a mass of people who are marginalized. For example most Americans don’t believe the government storing metadata from their phone calls and email accounts is a problem. They have, they say, nothing to hide. Neither did Josef K. That’s the way it starts. Believing one is innocent as if that is sufficient when the shadow of authority falls over their path. The reality the politicians are the front stage for an invisible civil service that expands into the private sector, merging bureaucratic procedures in a seamless web.

Like a fly, Josef K fell into the invisible web long before there was an Internet. It is what makes The Trial relevant and undated. Our personal fascination with the fly hitting the web, sticking to it, struggling, protesting, and slowly resigning himself to his fate. He blames himself and not the web. That is the irony of this dystopia where the structure of the web is such that no one is responsible. 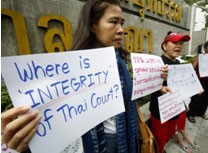 One morning people wake up and find that they are caught in the web. They panic. Who to turn to? There is no hot line to phone for rescue. There is no possibility of rescue. There are no courts or other institutions that remain impartial and work to restrain power; instead they come to represent another aspect of absolute power. Evidence is always insufficient to bring one of the overlords to justice. There is no justice. And in The Trial, no one hears Josef K’s cry for help. His protests of innocence have no meaning once caught in the web. He’s there because he put himself there. He’s a victim and he’s to be blamed for being a victim.

The vast majority of Thai people in Bangkok and the countryside continue to believe in elections as the solution.

Would have representative democracy have saved Josef K? The answer to that question is the big issue of our time. Not just in Thailand, but elsewhere, there is evidence of growing discontent in the wide spectrum from dictatorship to democracy. The belief in government as protector of personal safety and welfare has collapsed. The rich withdraw into gated communities with private security forces, their children in private schools, their wealth in offshore private banks. The poor are left to fend for themselves on the scraps.

What is left is escape. Hit the road. Unplug from the grid. That is easier said than done.

Escaping from the grid—that is steering clear of the web—has a few people making a run for it. They won’t get far. The surveillance system grows until ultimately there is no place to escape. At that point, we are all guilty of something. We wait and plead our innocence, we rail against the injustice of it all. And so did Josef K. When the end came he no longer objected, to shout his innocence, he condemned himself, he was both victim and executioner. The State remains hidden, faceless, without responsibility. They no longer need to pull the trigger.

They’ve infiltrated our consciousness, installing an operating system that works on automatic pilot. Once in place, we are programmed to carry out on ourselves their dirty work. It’s how the new governing system was designed and organized to work. What has changed from Josef K’s time is the role of technology is making the State’s goal of infiltration vastly more efficient. We file daily status reports on ourselves through social media. We are our own parole officers. It works because it all appears so benign and friendly. All these digital communities ask of you is to ‘like’ them and to feel mistrust and guilt that you have private thoughts and feelings that they may not like. Those ‘likes’ are harvested, stored, analyzed, and cross-referenced.

The Police State broke George Winston inside Room 101. But Josef K needed no Room 101. He broke himself.