Chimeras in the Forensic Lab

It seems every week that scientific discoveries are upsetting conventional wisdom about our understanding of reality. The scientific shakeup of beliefs cascades through the culture, including (and especially) the arts. The latest example is our understanding about DNA and the genome.

Remember the race to be the first to transcript the first human genome? Remember the genome was the blueprint of the DNA code for a human body? That was 20 years ago and came at a cost of several billion dollars.

As it turns out the first genome to be completely sequenced is more like a stick-figure drawn by four year olds. Recent research indicates the real picture of the genome(s) is more like Georges Seurat’s pointless painting A Sunday Afternoon on the Island of La Grande Jatte (Un dimanche après-midi à l’Ile de la Grande Jatte).

If the human genetic code were a mystery novel, the genome unraveled the story and fit the pieces together.

Only it has turned out that many people possess not a single genome but multiple genomes.  We aren’t just a single volume of instructions from a single egg and sperm. There are other possibilities. The genetic story sequenced inside your genome profile has other authors than your parents.

The Greeks had a myth about the chimera, a female and male creature that was part lion, snake and goat. This is the world of imagination where hybrid monsters come into being.

Were the ancient Greeks onto something? There is evidence that indeed a large number of human beings are in fact hybrids. This doesn’t mean they are part goat, snake or donkey—unless they happen to be a politician. The human chimera is a person whose genetic makeup is drawn from more than one genome.

As Carl Zimmer writes for the New York Times, the latest scientific work in genetics and scientists are saying that there is evidence that supports the theory that we are the product of multitude of genomes. We have a potential multi-volume of blueprints and we see evidence of the structural difference that results in many areas. Rare diseases may be understood in the context of the genome complexity of the carrier. A single person may be O-Blood along with some A-Blood. 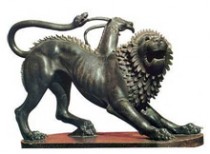 The genome puzzle is more complex for women. If you think you’ve seen and heard everything under the sun, see if this medical discovery is something new:

Carl Zimmer tells the story of “One woman discovered she was a chimera as late as age 52. In need of a kidney transplant, she was tested so that she might find a match. The results indicated that she was not the mother of two of her three biological children. It turned out that she had originated from two genomes. One genome gave rise to her blood and some of her eggs; other eggs carried a separate genome.”

That story is highly unusual. What is apparently far more common is that when a woman is pregnant some fetal cells are left behind inside the mother’s body where they travel to various organs where they perform repair work to heal damage.  Scientists are finding neurons with Y chromosomes inside a mother’s brain and in breast tissue. The Y chromosomes are left over from fetal cells from a male fetus.

Science and technology have an impact on law enforcement and the criminal justice. This is the turf for crime fiction authors. And the recent studies about multi-genomes will upset the way the authorities go about conducting forensic investigations and how the conclusions can be drawn from such investigations. For example, in the case of a sexual assault, the police may take saliva from a suspect and seek to match the DNA from the saliva to the DNA in the sperm found in the victim.

If the two samples don’t match, then the suspect is released. He’s vindicated by fact that his saliva DNA does not match the sperm DNA from the victim. Given these recent developments, the suspect’s saliva and sperm DNA may not match but he’s committed the crime. It is possible, given the possibility of multi-genomes that the two DNA samples, though not matching, are from the same person.

In the case of a murder victim, where DNA is all of the circumstantial evidence available to identify the killer, the multi-genomes world makes it difficult, despite non-matching DNA to assume that the suspect is in the free and clear as a suspect. The studies may also raise problems with ongoing efforts to exonerate someone convicted of a serious crime such as murder or rape based on inconsistencies in the DNA evidence used by the prosecution. The Innocence Project  has documented cases where convictions have been overturned based on conflicting DNA evidence.

We can no longer predict with certainty from a blood or saliva sample (or any other sampled site) what else is going on outside of that locale. These are early days in genome discovery, exploring networks, interfaces, and combinations, and seeking to understand what is a highly complex system. It places in question the opinion of doctors, researchers, and scientists that investigations into DNA must take into account the possibility of different genomes.

Look for this mismatch of DNA samples to appear in a crime fiction. As novels are often the canary in the mineshaft carrying the message to the public that the old mine is poison. In this case, our certainty that we are the product of a single genome has been refuted. We can expect prosecutors and defense counsels to start calling upon genetic experts in criminal trials. The defense will be seeking to sow seeds of doubt about the DNA results that point to the accused’s commission of a crime. While prosecutors will call upon scientists and genetic researchers to estimate the high probability that one of the genomes found at the crime scene belongs to the accused. It won’t be surprising to find judges and juries scratching their heads and trying to reach a decision on guilt.