Everyone author has a muse. Along with painters, composers, dancers, and other performing artists. The muse has a long tradition. The Greeks had many gods and goddesses, but the one writers and artist are most fond of is called the Muse. An artist might be an atheist when it comes to God and religion but the Muse makes the most logical and skeptical of the bunch, into believers as to the intangible forces of creativity and inspiration. Someday when neuroscience decodes consciousness, the neural structure that creates the illusion of the Muse will be discovered. Until that day, we are little ahead of ancient Greece.

The idea of supernatural artistic inspiration had been around long before being co-opted into ancient Greek culture.

The Muses, the personification of knowledge and the arts, especially literature, dance and music, are the nine daughters of Zeus and Mnemosyne (memory personified). 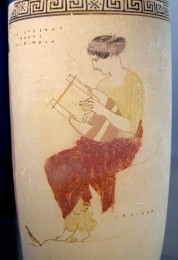 You may recognize the mother, Mnemosyne, as the term ‘meme’ for that idea that infects the minds of others comes from her name. Mind mental or memory were born from Mnemosyne.

For crime fiction authors, the Muse known as Melpomene was one of the nine daughters and assigned to inspire works of tragedy. Before you set up your home altar next to your computer and call out to your inner Muse, there are a few things to know about Muses—their mother, Melpomene, has a past.

Melpomene is portrayed wearing a tragic mask and the cothurnus, boots traditionally worn by tragic actors. In another version, she holds a knife or club in one hand and the tragic mask in the other. She wears a crown of cypress.  Her father was Zeus and her mother Mnemosyne. And if you wanted an inspiration for a lyrical phrase she was the Muse you made offering to.

Words like ‘amuse’ and ‘museum’ derive from the original use of Muse. Many ancient writers paid homage to the Muse: Homer, Virgil, Dante, Chaucer, and Shakespeare.

Living in a culture like Thailand where spirits are daily worshipped at small spirit houses scattered throughout the land, and upcountry workers as well as city workers, give offerings; the idea of the Muse is a natural fit. Spirit Houses erected on the premises housing newspapers, publishers, media houses and advertising agencies don’t yet display statues of the nine daughters of Zeus and Mnemosyne. But 2013 is young and the meme of Muse hasn’t gone viral in Thailand. Finding a Muse to present at Government House and Parliament might ‘inspire’ if not poetry, some new comedy and tragedy to retire the old tropes people don’t find of interest.

I have a theory (or two) about the nature of the Muse. When one of the nine daughters of Mnemosyne and Zeus come to visit, pay attention. What kills creativity is distraction. What ignites the imagination is found through focus and attention that seeks to find a new pattern, a new way of seeing or thinking. That kind of thinking is difficult. It takes lots of resources. You can witness the Muse indirectly when you see a great painting, or theatrical production or read a great book. The result of the best of the arts is the creation of something out of inspiration.

Most of the time, our attention is divided. We have too much on our mind, pulling it this way and the other. We flit from problem to problem, image to image, from the past to the future, like a bird hoping from branch to branch looking for the tree. But the issue isn’t limited to the non-stop discontinuous internal mental streaming, we also add to our distraction by the input streaming into our brain from the exterior world. To call on the Muse to visit means a commitment to closing down our random thoughts and to shut out stimulation from the outside world. TV off. Internet off. Phone off. “Do not disturb” sign on the closed door. 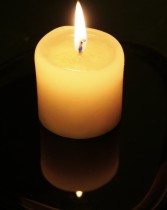 Light a candle. Wait for the Muse to deliver the right word, phrase, scene, and image that fit into a narrative flow. That is my other theory about the Muse. It is another way of describing the flow. Musicians, writers, dancers and painters know that space where the notes, words, movements, colors appear as if from another place, and create a narrative force that carries the creator along a path he or she would never have discovered inside a mind cluttered with internal and exterior attention grabbers.

The Flow is the space artists seek to enter and never leave. When I write, I work to find that space because in the Flow all the nine daughters of Zeus and Mnemosyne are manning the oars on a boat that navigates itself around bends, and through rapids, and delivers you to a destination you never would have discovered in a world too full of noise.

(Bilder: wiki media, gemeinfrei)
Diese Text erschien am 10. Januar 2013 auf unserer Partnerseite.
His latest Vincent Calvino novel, 13th in the series, is titled Missing in Rangoon and is available as an ebook on Kindle.