Orwell, Koestler and the Noir Brigade

International Crime Authors Reality Check is written by a group of professional authors who measure their literary work with an authenticity ruler. As 2012 winds down, I’d like to look at the tradition of two authors: George Orwell and Arthur Koestler who have had influence on my own attitudes about what to write about, and matching experience to story and character. The best of noir/political fiction draws upon, in my opinion, the real life experience of an author who has found him/herself a victim of violence or has lived through the aftermath of violence inside a shattered community.

Both Orwell and Koestler’s lives were shaped by civil war and world war, and the lessons they learnt from the political front lines has forever carved images of official violence into our collective memory. 1984 and Darkness at Noon are prime examples of noir novels written by authors who had personally witnessed such darkness of the human condition.

In noir fiction, the officials and party functionaries are armed by ideology and guns. The state monopoly of violence is sold by the State as the best solution to protect you against chaos and the violence of your neighbors and strangers. As history shows, there are many examples where such officials use their power not to protect you from lawless forces, but to advance their own interest. The government becomes a racket for those who govern. They block a citizen’s passage down the winding, twisting roads of alternative thought and ideas. They erect intellectual tollgates, demanding supplication, loyalty and purity of belief. These attitudes are preconditions to a noir world.

There is no bargaining, compromising, or negotiating inside this noir world. Any response short of total agreement invites those official forces to restrict, intimidate or if need be destroy the dissenter. Both Orwell and Koestler have written the ultimate noir novels. In Darkness at Noon and 1984, the loyal insider confesses to a false crime rather than repudiate his belief in the institution and its leaders. A false historical narrative is an extension of voluntary confessions to false crimes. Such confessions lead to death or psychological destruction of the confessor. That is how noir ends. Not with hope but despair.

Who has the credibility to write about false historical narratives? Orwell wrote an essay suggesting it can only be artistically rendered by an author who lived inside the false historical narrative and accepted it for a long period of time as the truth. Only an author with that experience can convey the authenticity of repression, and recreate the actual psychology conditions of people who live and die in such regimes. The outsider, the expat, comes into the new culture of ideology with idealism that can easily turn into a descent into the worst kind of psychological terror. 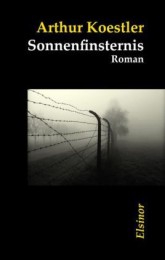 The Guardian has a review of Arthur Koestler’s classic novel: Darkness at Noon.

George Orwell wrote an essay about Koestler in which he spoke about a generation of European writers that wrote ‘political’ books with the kind of authority that Orwell felt was lacking in English writers.

Orwell wrote in 1941 that these Europeans were “trying to write contemporary history, but UNOFFICIAL history, the kind that is ignored in the text-books and lied about in the newspapers. Also they are all alike in being continental Europeans. It may be an exaggeration, but it cannot be a very great one, to say that whenever a book dealing with totalitarianism appears in this country, and still seems worth reading six months after publication, it is a book translated from some foreign language. English writers, over the past dozen years, have poured forth an enormous spate of political literature, but they have produced almost nothing of aesthetic value, and very little of historical value either.”

The subtext is that unless the author has emerged from the context of where totalitarianism is an all-encompassing aspect of their life, having been part of the process that defines the identity and mindset, they are better equipped to communicate the psychological range like an experience bent over his sheet of music reading the score and conducting the symphony.

The central question for Orwell in Darkness at Noon was why the Bolshevik named Rubashov, who had committed no crime, confessed to a false one? The book is a study of the psychology of a true-believer who has for irrational reason been falsely charged with a crime. What would have been in Orwell’s view a mere polemic if it had been written by an American or English writer in the hands of Koestler because he has experienced what he’s writing about can raise the experience to an aesthetic level.

Experience was something that Koestler could draw upon. He was sent to Spain during the Civil War in the 1930s and was arrested and imprisoned and came very close to being shot. But for the intervention of powerful friends abroad his fate would have death. Like Orwell, who also saw action in the Spanish Civil War, Koestler survived to brush up against death during World War II. He escaped Paris as the Nazis arrived in 1940. 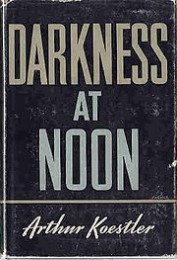 The irony of both 1984 and Darkness at Noon is the anti-hero in both is doomed from the beginning, and it is the struggle against that fate that makes them compelling, timeless, and disturbing. In an age where ‘entertainment’ is the byword, ‘disturbing’ political novels are out of favour while books written by authors whose lives are remote from any front line produce books like Fifty Shades of Grey. The growing interest in noir fiction, authentic fiction written by authors who have experienced the crack of the whip not in a sensual setting but in a political one and who know the difference, shows readers have an appetite for political novels that speak to a larger truth when the agents of repression come calling.

His latest Vincent Calvino novel, 13th in the series, is titled Missing in Rangoon and is available as an ebook on Kindle.