I saw the new James Bond movie Skyfall this week. It was as though a Chuck Norris movie and Silence of the Lambs had been remixed with Daniel Craig playing Chuck Norris. Hector Hannibal morphed into villain Silva in Skyfall. Daniel Craig, in the tradition of 72-year-old Chuck Norris, went bare chest and killed more extras than appeared in the movie Gandhi. It was more like computer game killing than the real thing. People who are in the drone business must have the same detachment–this is another day, another job, attitude toward killing. 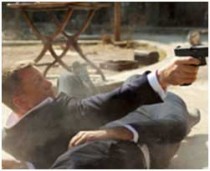 After the movie, I tried to remember how many people James Bond killed over the course of the 2 hours movie time. There were too many expendable characters who died to keep track. This must be something like working the immigration desk at the airport as one 747 after another lands and their weary passengers queue with their passports.

Someone with a lot of time on his hands has indeed gone through the Bond movies and added up the dead bodies.  In the 1967 Bond movie You Only live Twice the final tally was 196 killed. Bond didn’t kill all of them. Apparently Bond’s highest kill ratio was Goldeneye where he dispatched 47 bad guys. It depends on how you count and who is doing the counting.

Here’s an 8 -minute YouTube montage of several Bond films where the body count is 401 kills.

My feeling is that Daniel Craig came close to that number in Skyfall. But I could be wrong. Besides, the body count doesn’t really matter until you are a politician or a general and need to explain why you need more money. When you are watching a movie, you find yourself weaving from scene to scene with the character rather than a cold, calculated computer keeping track of the bodies as they fall.

What Skyfall and other movies like this demonstrate is how violence is an essential part of the entertainment industry. Movies are only part of the story of how violence is disseminated. The nightly TV news, YouTube, newspapers, tabloids, blogs, Internet feeds, Tweets—all are fused with body counts, details of acts of violence, threats of violence in the future. Our cultural meal is heavy with violence as the main course. It seems there can never be too much violence.

Anyone who writes crime fiction is hardly in the position to point a trigger finger at another person who uses violence in the entertainment or news industry. Vincent Calvino, over the course of 13 novels, has killed a fair number of people. I’ve contributed to the overall cultural body count. As I recently wrote to my friend and fellow blogger James Thompson, violence is a ritual. It probably always has been. Slaughtering of animals and human beings to appease the gods made violence sacred. Religion gave violence moral authority and purpose and made killers into warrior heroes. Killing in the name of a higher cause is a way to recruit killers and put them to work. Someone else’s higher cause for murder never comes close to matching your higher cause for murdering. And so it goes.

Violence falls generally into a several broad categories that may at times merge.  First is the use of violence as an act of revenge. Capital punishment is the State acting as the agent of revenge. Often revenge is privatized in movies, books and TV. Skyfall is the classic revenge movie where the villain uses violence and mayhem to avenge the wrong done to him. He’d been betrayed, and what better response to betrayal than to murder the person who turned disloyal?

The second category includes killing competitors. In modern terms competitors are ‘enemies’, ‘terrorists’, ‘demons’ who, once they enter this class, can be killed with a clear consciousness. In a state of war, whether against a country, or war against drugs, the killing is to obtain a victory over bad people and bad forces, and those who do the killing are given promotions and medals. At the highest levels of the political class, a certain sociopath personality is useful to use killing and violence to achieve policy goals. While they don’t often do the killing themselves, they use psychopaths to do the dirty work.

A third category is violence committed by psychopaths, that small but mentally deranged group of individuals who kill not out of revenge or to eliminate a competitor but out of the thrill or pleasure. An inordinate amount of media is given to such killers. They are fundamentally different from the other killers. Psychopaths feel no remorse, guilt, shame or empathy for their murders. Brutality and cruelty don’t register except as part of the pleasure enhancement of killing.

This leaves us with the question of where James Bond fits in the violence matrix. In Skyfall, Daniel Craig’s killings fit all three categories. He’s a man for all seasons in the killing game. To keep that high body count, it is useful to employ all the categories and hope that the audience doesn’t notice that this is rarely the reality of life. But whoever said that James Bond had anything to do with reality? Indeed, having seen Skyfall is a reality check on violent death, its causes, actors, and the reasons behind the body count.

What Skyfall does bring home with the huge body count is that we know nothing about the people Bond has killed. They have no back-story. They have no mother, father, brothers, sisters, friends, neighborhood where they played as children. As they never come to life, we feel nothing when Bond kills them. It seems the Bond franchise is in perfect harmony of the modern technological age of remote killings of people who we are never allowed to know. They are extras in life. They have no name or identity. Body counts on the industrial scale require that detachment. We can’t really allow ourselves to know and identify with the people our leaders, police and military kill.

Skyfall is a failed attempt to turn the James Bond Franchise into a Noir Film series. The problem is James Bond Ian Fleming didn’t write Bond as a noir character. Though Daniel Craig does a credible job of playing the noir lonely hero, but his clothes are too well tailored. He looks more like the manager of a Boy’s band. Also the noir atmosphere dissolves into Pulp fiction slapstick each time Silva, the villain, turns up with a fresh platoon of goons who in the tradition of the gangs around the Joker in Batman, die and die in inexhaustible numbers. Skyfall never decided what kind of movie it wanted to be and the evidence of that unresolved struggle leaves an unfinished decision. This wasn’t James Bond. Then what was it? 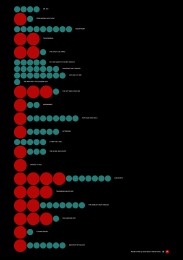 I have a theory why the movie didn’t work. The director and producer of Skyfall wanted to bring in both the old James Bond audience and the newer, noir audience of Girl with the Dragon Tattoo. There are no heroes who beat the system in noir. There are bad guys, and that is a good place to ask the question: who really are these bad guys and why must they die by the busload and in anonymity except for their leader?

It started me thinking one of the keys to labeling a book or film noir is knowing your bad guys and those around them as well as your hero. That’s knowledge is worth having because then the killing is put in a different context.

As in real life, in fiction, we ask ourselves: Exactly, who are the bad guys?

Now, that is a difficult, complex and dangerous question.