Barbarians have acquired a bad name. Their negative press is part of our hive programming. We feel revulsion to outsiders, the barbarians who threaten our way of life, our values, our norms, and our laws and institutions. Leave our hive alone!

The barbarians, in Roman times, were the Germanic tribes along the borders. These tribes had a disturbing feature—their members had minds that hadn’t been programmed by Roman cultural, governmental, military or educational authorities. More simply they came from another hive. That’s why they were called barbarians. They weren’t Romans in outlook or mindset. They had their own ideas about honey.

On one level a barbarian is a person who had managed to escape, reject or avoid the programming of an established culture or civilization. On another level the barbarian wants to impose a different operating system on the invaded hive.

Critical thinkers, noir crime novelists, essayists like George Orwell are a few examples of modern-day barbarians who perform intellectual hacks into the ‘civilized’ mind, planting a disturbing possibility—what civilized cultures have accepted as reality is dangerous, distorted, and flawed.

A few essays ago, I warned that the Truth Keepers (the Official Programmers, Honey Hoarders, the metaphors multiply in a hive setting) have exploited a programmed belief system built on anxiety, fear and desire so that the system largely serves the honey flowing for a narrow part of the hive and the bees who are close allies. The way people are programmed not to think other than the accepted wisdom about work, family, parliament, courts, cities, shopping centers, or entertainment makes them good candidates for hacking.

It is the duty of the Official Programmers to guard their turf and strike hard at hackers trying to break into and alter the messages about how the system functions, its purpose, and fairness. I suspect it is no different at Microsoft, Apple, Google, Facebook or hundreds of other less well-known companies where most of the honey goes to only a few.

Until the Internet changed the way the game was played. It seems that the programming works best when the Truth Keepers had a secure monopoly on what beliefs and ideas were transmitted on which channels. For most of human existence, the borders of the mind have been sealed like the borders of North Korea. No outside ideas contrary to the received wisdom could get in, and only the elites and their children, who were the main beneficiaries of the ‘civilized’ and ‘sacred’ beliefs, were allowed to leave and return with little anxiety they would come back and start a counterattack. In the case of Cambodia, in the time of Pol Pot, the French-educated Khmer Rouge leadership played the part of the barbarians.

There was no doubt an evolutionary advantage to tribes that shared the same unquestioned beliefs, thoughts and values in confrontation with tribes of free thinkers who thought dying for a shared belief was a stupid thing. While there were likely no tribes whose members were all free-thinking with no shared beliefs, there are free thinkers nestled inside or nearby for every tribe. They look for ways of breaking out through the barricades with a hack that isn’t supporting the Truth Keepers/Official Programmers’ system.

Control is essential to maintaining any programmed system, including the one that has shaped your mind.

Some of those seeking to hack the official system write noir crime fiction.

Noir crime fiction is one of those barbarian-created enterprises. The dark shadows that fall over the lives of the characters—who have no avenue of escape from a corrupted system that lies, cheats, and represses the truth—and hack that message into the civilized mind. It leaves behind large questions about the trust that can be vested in Truth Keepers. Barbarians raise doubts and spread uncertainty.

The darkest of noir scrawls a message that those who you believe are responsible for making you safe are the exactly the ones you have the most to fear from. The noir hack opens that vault where our deepest fears, anxieties and desires are locked. The noir hack rewires a small part of the neural network used to maintain an ordered, stable consistency of complex beliefs, values and morals. It corrupts that network with contradictions, inconsistencies, and duplicity. 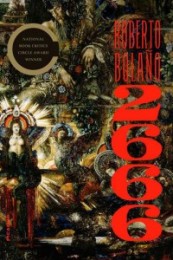 Stieg Larsson’s novels offer just enough hope to make them hardboiled thrillers. But Roberto Bolano’s noir hacks strike deep into hive chaos. He dares you to walk through that wall of fire and come out the other end unharmed. Try reading his novel titled 2066 for the full monty of noir.

Some readers will stop reading a noir crime novel because they’d rather not have to go through an ordeal that comes from characters whose existence and fate seriously expose flaws in their beliefs or the Truth Keepers are parasites. We tend toward reading that makes us comfortable, and reinforces our beliefs. We seek out books and films that our Official Programmers recommend.

Readers programmed to want a happy Hollywood ending can be disappointed with a noir crime novel. They expected a hero who overcame the odds he faced. Identifying with a hero allows us to feel that we can also beat the odds and live happily ever after, content with our life of honey gathering in the hive. Framing of hope embedded in worthy narratives is part of what Truth Keepers do for a living. These readers push books that reflect the official line onto the bestseller category and into Oscar winning movies.

The world of Harry Potter created billionaires and a publishing mini-boom around the world. Eight hundred thousand copies of the first Harry Potter novels translated in Thai were sold in a country where 5,000 copies is a bestseller. Crime noir stories turn the Harry Potter narration on its head. Noir characters are caught like a deer in the headlamps on a badly lit road.

The noir author weaves a web, and no matter how the character struggles, his or her decency or nobility will not save them. Noir characters never escape their fate. No hive operating system has ever been in their interest. People are locked inside a belief system. There are no handles on the door. Those who deviate from their programmed belief system, they find themselves cut off, isolated, and with no net to catch them when they fall. They are, in a word, fucked. Just like the deer. Thump. Just like Winston Smith in Room 101.

You aren’t going to find noir crime fiction written, published and distributed in countries such as North Korea, Burma, Saudi Arabia, Iran, Syria or China. You can add other countries to this list.

The crime noir readers receive an existential message—that their civilization is based on a successful system program rest on gulag of mental slavery (always a few people who fall between the cracks—they are subject to censorship, disappearance, house arrest, prison or exile).

In the noir world, the barbarians work as authors processing their fictional characters as hacks into how most people think about their part of the world. Readers follow noir characters much like themselves who were raised and educated under the operating system, and rather than being rewarded, a small turn of the wheel of fate seals them to certain defeat.

A novel often takes many twists and turns, showing struggles, the ups and downs, but the end is inevitable. It is relentlessly dark. The power of noir is the shattering of the illusion that the characters can effectively operate as independent and free agents. There is no free will in noir. In a noir story, such a character is ultimately destroyed in the attempting to exercise free will. It has to be that way. It’s for the good of the hive.

Noir fiction is subversive literature. It is what barbarian minds use to hack minds civilized to live, act and think within the coconut shell of civility.

History shows that over time, civilization lose their confidence in Truth Keepers, elites fall out and go to war with each other, and that absolute belief systems, sooner or later, have a sell-by date. Books are an early warning sign of a programmed system in decline and ripe for collapse. That’s why governments, school libraries, and local authorities censor them. And noir fiction might be thought of as the canary in the coal miner’s cage. Since noir fiction is largely dismissed as crime, a thriller or a mystery it slips past like a stealth bomber.

Noir narratives are hacks that lodge inconvenient questions into the reader’s mind about the fairness, purity and sanctity of his beliefs. In the larger scheme of things, a book is a tiny hack in a vast system. Most books, and certainly most noir crime fiction, go unnoticed by most readers whose minds are under a daily official programming schedule and subject to a huge range of government and commercial hackers. Authors would like to think their book makes a difference. Realistically, it is useful to remember that the ‘literate’ person who can read and write has a mind like an immune system programmed to filter out challenges to their preset programming.

Biases are a difficult beast to defeat. Once they have their teeth in you, they can rarely be shaken off. The political turmoil in many places is the struggle to challenge the official programming. We are Rome and the barbarians are massing and occupying public spaces. The flow of contradictions calling into question the sanctioned beliefs accelerates.

In the long haul, it is the outside barbarians who bring down the old system and establish their own civilization, install their own Truth Keepers or Official Programmers, and the cycle will begin again. A new hive comes into being.

When that happens, a reset button is pushed and a new system, system operators, routers, programmers evolve a new and improved security systems to keep the new imported message pure and uncorrupted. The irony is the barbarians aren’t all that different. They will work hard to prevent others doing to them what they did to the old Official Programmers. Way down the long road of time, if we are still here, cultural and social life in the hive will have been rebooted and junked many times. Will there be a new group of noir crime authors whose narratives shape, in a small way, some of the outcomes? Or will we be just another small band of barbarians who end up in a footnote in a digital history library sprawled over a hundred light years across?

Have a second look at the video.  I posted last week. It is one ‘barbarian’ who walks into the crowded square and plays the outsiders music, intoxicates the crowd and soon the locals are dancing to his tune. The sweepers, the military, everyone is won over to their side. It is a good illustration of what the Truth Keepers fear most about the barbarian.