I have been playing with the idea that noir crime authors are a subset of hackers into the hive mind collectively shared by their readers. A few years ago I wrote about Writing Novels inside the Hive Mind.  I’d like to further develop this metaphor along with the related idea of hacking. It is mixing of metaphors to be sure. I hope to show that despite the limitation, we can find another layer of understanding and perspective about how we process noir crime fiction.

The best of the noir authors understands, like all hackers, that the mental system has an explanatory description of the world that has a number of flaws and weaknesses. The stability of any hive or colony (think ants or termites) requires order, separation of functions, and coordination of routines, and cooperation to survive. We find elements of this structure weaved through our own lives. Cultures bond people by giving them messages about predictability, certainty and control. Most people recoil from inhabiting a world where doubt, uncertainty and randomness can only be removed with sleight of hand tricks. Hive dwellers, though, are a sucker for such illusions.

Tyrants ultimately threaten to capture and control a hive population through the use of delusion creation projects. They play on the cognitive handicaps by using techniques that calm the hive. The business of most cultures if you peel back the political, social and economic layers has a common theme: the elite bees or ants maintain their status by promising to eliminate doubt and chance. If you can create the illusion of hive harmony, purity and certainty, and you own the hive.

Noir crime fiction is a hack into the hive, leaving behind a message—you can never overcome or defeat randomness and there are no handrails that deliver you from doubt.

I’d like to develop that idea in this essay.

In a minute I’ll throw a noir crime book into the hive and report on the buzz.

Our cognitive machinery evolved, in part, as a function to living in the equivalent of a hive. You are unique just like everyone else is the old saying. Our minds suffer from a number of biases, illusions and errors. We rarely question whether what we are processing is connected with reality. Most of the time, we don’t recognize a gap between our perception and the reality we perceive. We see patterns that are smooth, harmonious, and consistent, reinforcing our beliefs and values. We make honey. We work for those who run the hive. Most of the time, we don’t think twice about that arrangement. We look around and see everyone else is in the honey making business and not questioning too deeply their role in the larger scheme of things.

Our assumption is that our mind is a reliable reporter, translator and interpreter. Clinging to beliefs is much easier than junking them and considering new ones. Beliefs are resilient and reality doesn’t necessary change a belief.

Make fun of or belittle someone’s idea of the sacred and see the reaction. Try teaching evolution in a Texas school. Or try to suggest that a state sponsored health care or gun control is a good idea in America. 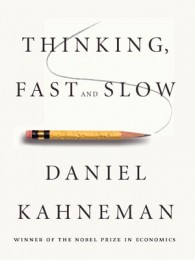 Daniel Kahneman who authored Thinking Fast and Slow, has spent a lifetime studying the effects of anchoring, confirmation bias, framing and other issues that influence our distorted view of the world, others, and ourselves. The distortions vary from culture to culture, but the basic idea is the same. We have the same brain but the programming is culturally determined. Each hive has a slightly different operating system much like Apple and Microsoft platforms sharing a different set of biases and limitations, but in reality they are more alike than different.

It is the biased mind that reads and thinks about books. As it is a biased mind that writes them. There is something very noir-like about the trap of biases that our mind automatically falls into.

We need to think about what it means to educate literate people. The basic idea of literacy that most people accept is narrowly framed. Literacy means a person has acquired the ability to read and write with sufficient skill to navigate inside the hive. Without literacy, there would be no book authors and book readers or books. Also, literacy normally leaves a large backdoor for updating the operating system. There is intense competition to hack the hive mind. The partial roll call includes authors, governments, religions, celebrities, corporations, political parties, advertisers, and subversives.

If the educational system is one where the teacher is the unquestioned authority, and the text the unquestionable truth, and the pupils’ duty is to master the language sufficient to read, memorize and write out the exercises that reinforce the received truths, the pupils graduate into the community not as ‘educated’ citizens but ‘programmed’ (and programmable) citizens. Ever since the industrial revolution, the commercial, corporate and military institutions have established power by hacking their messages into the vast ranks of programmed citizens. That is the template for the human hive. George Orwell’s 1984 fictionalized the process of programming and the perils of outsiders hacking into the citizen’s preprogrammed set of beliefs.

The use of critical thinking and analysis is paid mouth service all around the world. It has become a kind of slogan like motherhood. Or like the advice to avoid stress, exercise, don’t drink or smoke too much. Hive owners force themselves to lie about their commitment to the critical thinking business.

This isn’t exceptional inside the hive where there is a free for all over the programming hack into how you should deal with stress, how you should exercise daily, restrain your drinking, drugs and smoking. Our cognitive machinery has been hacked like a meteorite shower raining down hundred times a day dumping TV commercials, shopping mall live feeds, TVs in trains, ads online or in newspapers (where those still exist), billboards, on the logos on cars, shirts, watches, cell phones, handbags, and clothing straight into our brains. We don’t see the contradiction that this is the price of hive life.

Next time you wake up, start the day with a notebook and pen and note down the ‘hacks’ you encounter in your little corner of the hive. Open your eyes to what messages you find in words, symbols, slogans, commercials, logos, pictures and music. At the end of the day, go through your list to see how many hacks have been attempted on your mind. Our minds are filled with these viruses. They are overrun with tiny patches that slight through without us being aware we’ve been hacked.

To view everything in terms of our own time is another bias to avoid–though it is difficult to consistently do so. It is likely that every civilization has defined the ‘civilized citizen’ as the person who excels in representing the legitimacy of the Truth Keepers, these honey hoarders, extolling the virtues and grandeur of hive culture, the nobility and purpose of the unified community. Civilization, like any hive structure, can’t be established or maintained without such programming.

The programming power to shape the emotions of the hive members and organize their movements through art demonstrated in this video.  Have a look. It is a memorable and telling experience. Who gets to play the music controls those who can’t resist the instinct to join the dance and co-ordinate their movement with the others. Think of bees dancing to direct the colony to a field of flowers in bloom.

This Russian dance video shows the power of music imported from the ‘outside’ and in a culture noted for its historical restrictions on freedom of movement, thought, and artistic expression.

The Beethoven video demonstrates the power of the existing culture to use the Truth Keepers music to unite the hive members into one group strung together by a common, shared emotion. No barbarians are in that crowd.

Different music, different programs hack into the mind of the audience, leading them to quite different ways of expressing the collective self.