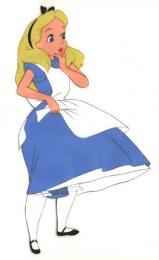 There is something Alice in Wonderland like about asking whether a corporation is a person. It is unclear whether the United States Supreme Court might be taking a page out the Mad Hatter’s book of logic when it comes to corporate ‘personhood.’

“Mad Hatter: “Why is a raven like a writing-desk?”

“Have you guessed the riddle yet?” the Hatter said, turning to Alice again.

“I haven’t the slightest idea,” said the Hatter.

Corporations are legal constructs. Abstractions that arise because a law allows people to create them, run them, profit from them, and defend them. No one will ever walk into a bar and find Microsoft or Apple sipping a glass of beer. People who work to advance the interest of the company are the ones at the bar drinking.

The United States Supreme Court not long ago (Citizens United) decided that corporations were to be treated as a ‘person’ for purposes of political expression. It must have seemed like a good idea at the time. Now that decision has come back like a bad penny. Can the corporation be a ‘person’ for political expression and not a ‘person’ when it comes to paying compensation when it is implicated in third-world countries that engage in human rights violations such as murder, extracting natural resources without caring too much about the environment.

Anyone with a passing knowledge of the East India Company (not to forget the Dutch West India Company) will know that if corporations were people that had vast monopolies, controlled vast estates, wielded political power, and you never had to look too far to find a lot of blood dripping from the hands of the flesh-and-blood people who ran them. Did I mention that they also did a lively business running the slave trade? That’s unlikely the image they wish to be viewed taking into account their current corporate TV ads or corporate brochures.

Corporations from the 17th through the 19th century were the vanguard of organized crimes, raising armies, selling weapons, drugs, beating, torturing, imprisoning or murdering the locals who raised a voice in protest.  If you’ve read along this far, and you’re saying, yes, that is all true. But didn’t all of those terrible things happened a very long time ago? There are no more colonies. Independent states run their own affairs. The United Nations has mandates about human rights and the environment. And that means, corporations are no longer evil polluters, looters, pillagers, and murderers, right? When a dog gets the taste of raw eggs it’s hard to keep him out of the hen house even though the house looks different from the old days. 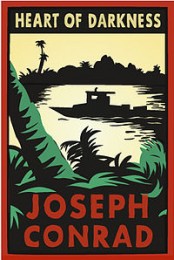 The Royal Dutch Petroleum Company has found itself a defendant in an American case that has reached the United States Supreme Court. So you thought all of that nasty business of colonial plunder and murder was behind us? Let’s take a brief look at the Kiobel v. Royal Dutch Petroleum case. To do that, put your mind back to Joseph Conrad’s The Heart of Darkness, to the space and time that reappears as officials of the Royal Dutch Shell worked along side officials of the Nigerian government to arrest, torture, and murder environmental activists, members of the Ogoni, in the Niger Delta, protesting the adverse health and environment fall out that resulted from unregulated drilling and extraction of oil from that region.

No one is apparently arguing whether the corporation through its officers and employees was complicit in the human rights violations that occurred in the 1990s. The argument instead is whether the victims who otherwise have no connection with the United States can pursue legal remedies against Royal Dutch Petroleum in the American judicial system. To do so the victims need to convince the high court that the Royal Dutch Petroleum Company is a ‘person’ under the 1789 Alien Tort Statute. If they are a ‘person’ then the victims of the faraway crime can sue them in an American federal court. In an earlier case, the Court established that an individual, who was a foreigner but who did business or had assets in the United States could be successfully sued for wrongful acts such as torture and murder carried out against another foreigner abroad.

It comes as no surprise who has filed briefs in support of the Royal Dutch Shell claim that the case should be thrown out. Britain, the Netherlands, and Germany—the countries with a rich colonial past, which means they know a thing or two about using corporations to keep a teach a lesson to the restless natives while enslaving the rest to extract natural resources from their lands. Funds limited to paying off he elites and profits for the shareholders. That’s pretty much sums up how the old corporate system operated and, despite the TV commercials about their responsibility to the environment and community, continues to operate in many ‘foreign’ countries.

The United States filed a brief in support of the victims right to bring the lawsuit. Who are the judges going to support? The Europeans with their corporations harvesting profits that come from valuable resources extracted from the mines, wells, pits and forest of the third-world. The American government may have decided that exposing foreign corporations to the full radiation of the American justice might cause such corporations to make a correction in their activities that have in the past led to the most ghastly abuses. And after paying out on a few lawsuits would take away some of the competitive edge gained through such exploitation by making compensation for third-world murder based on the American scale.

Assessing American styled civil damages against a foreign corporation operating in foreign lands against foreigners is a revoluntionary and clever way of reckoning the true cost of running the international resource business. That’s a novel scary enough idea to get three ex-colonial European governments to come down to rescue the Royal Dutch Shell. Come to think of it, I also wonder why the China and Russian hadn’t filed a brief support of Royal Dutch Shell. The potential countries involved are a cozy club of mutual self-interested resource extractors. Perhaps no one hasn’t anyone explained to them what is potentially at stake in this case should Royal Dutch Shell be conferred with ‘personhood’. Knighthoods for the CEOs, but no personhood for the company, thank you very much. They know where to draw the line in the sand.

The Supreme Court Justices at oral argument on the case have revealed their thinking about allowing these foreigners to use the American court system to chase down the wrongdoers and bring them to account.

John Bellinger in Lawfare reported on this exchange during the oral arguments:

Justice Kennedy said:  “But, counsel, for me, the case turns in large part on this:  page 17 of the red brief.  It says, “International law does not recognize corporate responsibility for the alleged offenses here.  And the — one of the — the amicus brief for Chevron [written by Jack Goldsmith, a former Kennedy clerk] says, “No other nation in the world permits its court to exercise universal civil jurisdiction over alleged extraterritorial human rights abuses to which the nation has no connection.  And in reading through your briefs, I was trying to find the best authority you have to refute that proposition, or are you going to say it is irrelevant?”

Justices Roberts and Alito showed their hand, too:

Justice Alito:  “Well there’s no particular connection between the events here and the United States.  So, I think the question is whether there’s any other country in the world where these plaintiffs could have brought these claims against the Respondents.”

Chief Justice Roberts:  “If — if there is no other country where this suit could have been brought, regardless of what American domestic law provides, isn’t it a legitimate concern that allowing the suit itself contravenes international law?”

Human rights and environment rights are detailed in standards by the United Nations. That’s wonderful. But corporations understand that the United Nations doesn’t operate a judicial system that can hold them to account. They know the place of the crime is on their side and no effective legal remedy is available to the victims. The question before the Supreme Court is whether to open American courts as a venue to reign in corporate terror.

A majority of the Supreme Court  justices decided in an earlier case Citizens United v. Federal Election Commission (2010)  that corporations were persons with the same right to freedom of expression as an individual. Meaning corporations could fund political campaign ads that advanced their political agenda just as an individual. Having put themselves in the business of bringing individual rights to corporations, whether it will take the next step is to apply civil remedies to a foreign corporation implicated in murder and torture. Or someone might whisper in the court’s collective ear that the case isn’t really about the murder and abuse of victims’ human rights, it’s about the unfair competition that violence assisted in allowing certain corporations a large cost cutting advantage not shared by their more ethical competitors. And we can teach those foreigners a thing or two about punitive damages to claw back some of that advantage.

On chasing that rabbit down the hole, the court enters Alice in Wonderland, where nothing is quite as it seems. In that world the successors of the East India Company and the Dutch West India Company are filing their briefs to carry on their business in the tradition of the 17th century. Big time crime syndicates called corporations, and the big time criminals who work for them artfully dodge and dart like a virtual particle in physics between separate states: being an individual when it suits their political agenda, and an abstract legal entity when it engages in plunder, looting and murder.

The Supreme Court can’t put Royal Dutch Shell Corporation into the Large Hadron Collider and settle the question once and for all. But the physics of justice isn’t scientific. The justices aren’t searching for the judicial equivalent of the Higgs Boson. Court decisions are hardnosed, practical, messy, contradictory, and never, ever above the politics and economic interest that make the world a duplicate copy of what it has always been. In the future if the Royal Dutch Shell Corporation and other ‘foreign’ companies like them may find themselves entangled in the spider web of defending damage claims in an American civil action. 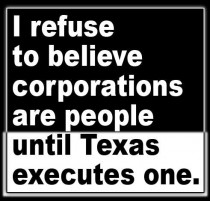 We will be left wondering if the advancing the economic interest of the Americans was the real reason behind the decision. Making a corporation a person is a good cover story and it also comes with the added bonus of making the court look consistent with its earlier ruling in Citizens United v. Federal Election Commission.

― Lewis Carroll, Alice’s Adventures in Wonderland & Through the Looking-Glass