Andrew Brown: From Convict to Constable

From Convict to Constable (I)

I was nineteen years old, my first year out of high school, when PW Botha, finger wagging and lips pouted, declared a state of emergency – a smokescreen behind which racial oppression could play out its last desperate gasp for existence. Feeding off the corpses of its citizens, the regime watched, claw-footed, as communities buried their young and old alike. Each weekend, the people of the townships returned to the cemeteries – funerals for those killed during the week, killed at the last funeral. One such weekend remains, perhaps, my most exhilarating and troubling memory – a formative moment of passionate power and wracking sadness. I stand, young and pimpled, yellow UDF T-shirt draped over undeveloped muscles, skinny arm bent against the sun, a small white coffin at my feet. An unknown death, now a political statement of intent nailed into a small box. Someone’s little child is held aloft and carried by the mourners toyi-toying through the streets. 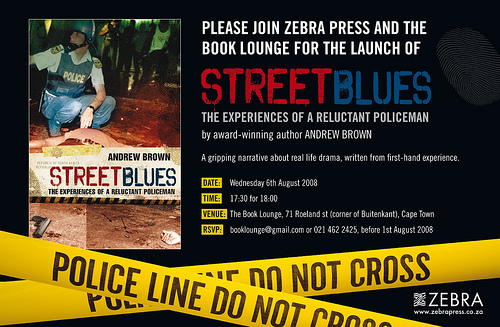 I am at the front, perhaps fifty thousand people behind me, knees bouncing high, the dust rising around me. The voices roar as one. ‘Haawoooshh … haawooosh …’ as imaginary rocket launchers fleece the sky. Feet stamp the earth in defiance. ‘Tttrrrrr … tttrrrrr …’ Wooden machine guns spray the ground. The boxed coffin bounces on my shoulder; inside, the body shifts about uneasily. I am invincible, I feel – surrounded and buoyed up. But in fact I am vulnerable; I am alone among hundreds of thousands of comrades, like the solitary dancer on the stage, out of pace with the troupe, bouncing when they are weaving, weaving as they leap. This is not my community; this is not my dead child. And who am I to carry her to her grave, jostling her body in the sky? I feel that awkwardness, that sense of straddling different lives, the surrealness of my position. My community of birth rejects me as a dissident, but when the dust has drifted away and the graves are filled, I will leave this place and slip away, a shadow crossing the train tracks; I will leave these people to their night of gunshots and police raids. I am a refugee, buffeted like a balloon back and forth across an imaginary line.

The crowd turns the corner of the shacks and spills into a wide, open market area. The coffin is passed to another comrade. We thunder forward, chanting and shaking our fists. The sunlight filters through the dust, casting an eerie orange-brown glow around us. But then I see it, gleaming like a predator in the tall grass; the yellow four-wheel-drive vehicle idling between two tight rows of rusting shacks. Waiting for me. The crowd pushes forward, unrelenting. ‘Phantsi Botha, phantsi Botha, phantsi!’ (Down with Botha, down with Botha, down !).  A man falls against me, wet with sweat, his eyes gleaming. We draw level with the gap in the shacks.

The yellow bonnet rolls forward, then lurches out into the crowd, scattering shrieking people. It nudges through, parting angry men and women without concern. The crowd streams around it, like a river around a boulder. The driver’s window is down. And I am the only one it wants. I know that; I knew that the moment I saw its nose poking out into the sunlight. No one else in the stamping mass will care. They are still surging forward. I am alone.

‘Brown! Come here!’ The voice is guttural and full. I stand still and the air seems suddenly quiet. The feet still pound the ground, the mouths are still wide open, but there is no noise now. A strong suntanned arm rests on the window, an arm for a young boy. Reliable and always there. Holding. Holding a shotgun, breached open. Inside, a red cartridge gleams.

I stare at the plastic round. There is some small black writing on the side, printed lengthways. Uncertain, I look up at the speaker, his eyes hidden behind sunglasses. Yes, I see it, my eyes say.

‘It has your name written on it,’ he says. ‘You see, look closely, I have written your name on it.’ Then I see it, something scrawled in blue ballpoint pen. I do not move closer to read. I believe him. I can trust its deceit. I know that he means what he tells me.

Barnard. That is all I know. I don’t know his first name; I don’t know his initials, his rank. I have no idea who he is, save that he is the devil on earth. Lucifer has sent him. And he will always be by my side, behind me, watching and waiting. The riot police are led by the infamous Dolf Odendaal. Brash, predictably violent, he has none of the venom of this man, Barnard, his right-hand hitman. When cruelty is pared down to its cold, steely bone, then the men like Barnard stand to be counted. Hated like no other man, feared like none other, an adversary who has sold his very soul for the advantage in the fight. He is reported to have drunk muti – no, not reported, he himself broadcasts it: ‘I am invincible. I have the muti in my blood. You cannot kill me. Try and you will see. Come. Come.’

And it was true; he could not be killed. A hand grenade thrown into his car. A bullet shot from behind. Nothing could fell him. Still he rose, more steeled than before, cutting down his measly opponents before him. Speaking Xhosa fluently, moving about the backstreets of the shanty town, creeping through the night like a shadow. One minute he was beside you, sly, a whisper in his leader’s ear, conspiratorial. And then, like vapour, just the smell of leather and gun oil, a tap on your shoulder and a shudder down your back. ‘Kom, kleintjie (come, little one)’ sucked through a neat row of teeth. Your bowels melting, a squeak on your lips, the cloying feel of blood on your skin. ‘Kom, kleintjie.’ And it is over.

There were days when I felt hunted, like an animal plotted against in the shadows between the hovels; not chased, not a wild run, but a slow, unavoidable trapping. There were days when I hated him without any fear. But they were few and far between. And he wasn’t there. I dreamt sometimes that I had killed him. It was never an intimate murder, not so that I should touch him, like killing a father. But from a distance, with a long-range sniper’s bullet, striking home. And then his body crumpled; his face contorted in surprise. But it never lasted, and he was resurrected, still a threat. More often, I dreamt that he had cornered me, somewhere dark, with no one else there. Alone. With him. At his eternal mercy, slowly picked. Slowly done.

I would have killed him if I could have. He would have killed me when he wanted to. At his whim. But he waited. And I lived. And he did not. Without warning or planning, he was dead. The Killer of Gugulethu was no more. My mother woke me with the news on a rare visit to sleep at home. Did we have champagne and orange juice? I cannot recall. My mind tells me so, but perhaps that is a construct.

Jubilation – the keeper of evil was dead. Barnard had been slain by a psychotic gun collector in Sun Valley. How bizarre that had seemed. As Barnard stormed into the house, the killer had blasted him in the chest with a shotgun. His death was certain. And the relief was immediate. We rejoiced. We celebrated. We toasted his death over burning tyres and warm apple cider on NY5, kicking sparks into the air. We whooped with joy, our knees lifting high as we jumped.

In the years that followed, Barnard became a notorious legend, flitting across memories at night, pushed behind closeted doors with the rest of the regime’s foot soldiers. The unbannings washed over us. Elections came and went, with all their wonder and novelty. But our country remained in trauma. Beneath the worldly achievements and overseas accreditation, some of us were still burning, still toyi-toying in the privacy of our dimly lit hearts. Political imperatives sullied our vision. Alliances shaped and dissolved as in some game show. Beliefs became amorphous and unreliable.

I longed to be bouncing, foot to foot, in the dust of the people’s army. I longed for the power, the clear purpose. ‘Today we bury our comrade, our friend, struck down. Today, nothing will stop us.’ I longed for the meaning, for the certainty of that struggle. But the fight had changed, the foundations had shifted, and nothing would ever be the same again. Blessedly. But never the same.