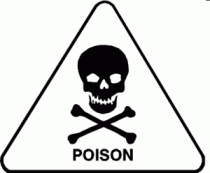 Mental test: What is the first weapon that comes into your head when I ask you to name a murder weapon?

Chances are you’d choose a gun, bomb, knife, sword, and a blunt instrument.

My guess is that you wouldn’t have chosen poison.

For young readers you might think of the band named Poison. They have shiny chrome skulls on their website.

From 331 BC The Romans used poison to lace food and drink. The fad of using fatal substances over a personal, business or political conflict ran through all classes of Romans.  By medieval times, the Arabs developed arsenic, odorless and clear substance, to kill a rival or enemy. There was no CSI in those days so proving that someone was poisoned as opposed to having died of natural causes was more difficult. Asia joined the ranks of cultures where poison became a tool to eliminate competitors.

It is easy for anyone to buy poison from a local shop. Either pesticide or disinfectant , in sufficient doses, will kill a horse. And either product will snuff out the life of a man, woman or child. 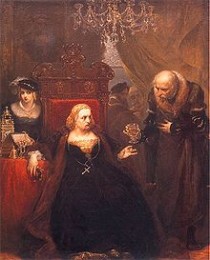 William Shakespeare captured the essence of our fear in Henry VI, Part II, Act III, Scene 2. “Hide not thy poison with such sugar’d words.” In a word, poison works by deception. When a person pretends to offer friendship and hospitality, our guard is down. If someone pulls a gun or knife, we have no difficulty understanding the threat. Poison in our tea. That is hitting us in a fear region that lives way below the belt line.

Pick your poison: arsenic, antimony, mercury, lead and thallium. All have been used to murder.

Women historically had a number of motives to commit murder. Their civil, property, inheritance, and marital rights were restricted in most places until the last hundred years. What better way to end a marriage, to ensure a father’s inheritance, to cover up an indiscretion than using a little poudre de succession or “inheritance powder”—the name the French gave to arsenic.

Poison and women are back in the news in Asia. And the case comes with all of the intrigue, deception, back door financial dealings, and corruption that would have left William Shakespeare trying to catch his breath.

A young British businessman Neil Heywood died suddenly last November in China. The official cause was alcohol poisoning and heart attack. Only Neil Heywood, the father of two, didn’t drink. Forty-one year olds don’t normally die of heart attacks. One would have thought the British authorities might have made some inquiries. But at the time, the British authorities accepted the

Chinese verdict. Big mistake. The ground has shifted. The allegation made in China is that Gu Kailai, the lawyer and wife of former Chongqing Communist party secretary, poisoned Heywood.

That’s a big deal. The theory being developed, now that Bo Xilai has been sidelined from his powerful position, is that the couple had used Heywood to transfer money abroad. The allegations are hundreds of millions of dollars. That’s not the official salary for a Communist party secretary but it is a good indication of the economic opportunities that go with that position if the office holder is so inclined.  The case is building that Heywood and Gu Kailai had a falling out over the commission that was to be paid by Heywood.

Soap box operas, tabloid newspapers, talk shows all embrace such sordid cases and they can also join the ranks of the New York Times and the Guardian in allowing readers to follow the updates on what is bound to prove to be one of the most interesting international murder cases in 2012. A murder case with potentially profound political implications for the Chinese Communist Party in the way it selects, monitors and disciplines members who cross the line where greed and murder override ideological purity. The CPC Central Committee has ordered a thorough investigation of the case. That doesn’t happen often. In fact, old China hands would have to be consulted the last time the Central Committee investigated the possibility of a murder carried out by the wife of a high-ranking Party Official party official.

“A powerful woman will have me killed,” I imagined he said. But I am a novelist and I am certain he said something more along the lines, “I want to see the consulate.”

Wang Lijun, the police chief, looks like an emotional mess, glancing over his shoulder, chain-smoking, and his uniform rumpled from being on the run for a few days and nights. “Yeah, right,” the marine must have thought. “I let this guy inside and they will be checking my urine for drugs until I’m 100 years old.”

The American consulate true to their creed of offering asylum to the oppressed, and those about to be murdered by their own officials, did what you would expect. They turned Wang Lijun over to the authorities in Beijing. Maybe the rendition planes scheduled for Iraq were all booked up. We’ll never know.

Now that Heywood’s death has hit the tabloids, the British government did what you’d pretty much expect them to do: ask the Chinese to investigate the circumstances of Heywood’s death. Questions are being raised in UK parliament and no doubt in what ever room the Central Committee sips its tea. What does the foreign secretary William Hague have to say according to the Guardian? “We now wish to see the conclusion of a full investigation that observes due process, is free from political interference, exposes the truth behind this tragic case and ensures that justice is done.”

Free from political interference? Justice? Truth? Excuse me, exactly what alternative reality does Hague live in? The man should have his urine checked for drugs. There must be some substance that explains how tragedy has been converted into farce without anyone laughing.  Or noticing that farce is more likely our existential finality.

Politics as well as jealous and greed, share a long history with poison as a partner in crime.  This case is no exception. What makes Heywood’s case one that may go down in the annals as a significant crime is the classic setting of court intrigue, betrayal, greed, and power. Like the Game of Thrones, a power struggle is afoot. In that whirlwind Gu Kailai’s guilt is what appears on the official stage.

But what happens behind stage is likely far more interesting as the downfall of Bo comes at a time when there is a Chinese secretive generational shift, and new, younger faces (men with less hair dye) will take their places at the seats of power. No doubt taking a new oath to swear they will endeavor to instruct their wives not to resort to poudre de succession to eliminate foreigners. And also the wives must promise never to scare local police chiefs into defecting to America. That leaves such a bad black eye for the rest of the world to see.